In Praise of … COLUMBO

Peter Falk has died at the age of 83 after several years in poor health. A brilliant stage and film actor equally adept at comedy and drama, familiar for his blistering performances in John Cassavetes’ films and as the loving grandfather and narrator in The Princess Bride; he is also one of TV’s true immortals thanks to his portrayal of Lieutenant Columbo of the LAPD. This is  a character that remains, for many of us, the greatest detective that American TV has ever produced. Not just because he was played on-screen by the same actor over a record-breaking 35 years (and with the same rumpled overcoat) but because this was a show that seemingly went against all the rules of popular crime drama – and still came out ahead. Privileging character over action, there was no violence, no car chases, no shootouts, no supporting cast (apart from his lovable useless slob of a pooch named ‘Dog’), no on-screen family life for the main character outside of references to his relatives that he would make in each case, no regular sets to breed contentment through familiarity – how did this show even get made, let alone turn into one of the genre’s greatest commercial and critical successes?

With a few notable exceptions, each episode is presented as an inverted mystery in which we see the murder planned and executed and then watch to see how the Lieutenant catches the perpetrator. The reason this works so well is because the murders are usually highly ingenious with seemingly full-proof alibis demolished by small clues that we, and the murderer, failed to notice the first time round. On top of some truly top-notch plots was a show that was all about talk, focussing on the cat and mouse game between the slovenly but intellectually razor-sharp Columbo and a succession of arrogant murders who all came to regret underestimating their opposition.

The character was not originated by Falk but in fact was first played in 1960 by Bert Freed in a one hour live drama, Enough Rope by Richard Levinson and William Link who then adapted it into a stage play, ‘Prescription Murder’. It’s about a psychiatrist whose plan to kill his wife and live ever happily with his mistress thanks to a seemingly unbreakable alibi is undone by a detective who keeps unearthing one inconsistency after another. This would be the essential template for the TV show which started with the TV-movie version of the play in 1968, initially ran as a series between 1971 and 1978 and would then switch network from NBC to ABC and return in 1989 and would end, after 69 feature-length episodes (it was never a weekly show but rather a recurring series of 90- or 120-minute specials) in 2003 with Columbo Likes the Nightlife.

There are episodes that play on the formula, with varying degrees of success, most notably in the series made when the show returned. This led to a couple of poor episodes (Undercover and Columbo Cries Wolf) and one outright disaster (No Time to Die) as well as some triumphs like RIP Mrs Columbo and It’s All in the Game (both listed below), the latter being especially interesting as it was written by Falk himself.

Here are my top 10 Columbo episodes, in chronological order:

After two pilot films (Prescription Murder (1968) and Ransom for a Dead Man (1971)), this was the episode chosen to launch the first series proper – sporting ultra-stylish direction by the young Steven Spielberg (lots of long takes and clever use of sound) it features Jack Cassidy as the ruthless, ever-smiling villain, one half of a crime writing partnership (rather like that behind Ellery Queen, Patrick Quentin and … Levinson & Link) who decides to bump off his more talented other half to collect the insurance. Cassidy, together with Robert Culp and Patrick McGoohan, is probably the ultimate foil for the Lieutenant. He would eventually appear three times as the murderer over the years (the other two are Publish or Perish and Now You See Him).

The first series episode to be shot, it features Robert Culp in the first, and best, of his three appearances as a murderer in the show (he also appeared later on in a supporting role in one of the 1990s episodes, Columbo Goes to College, as the father of one of a pair of killers, a move typical of the youth-obsesses approach of the networks when the show returned to the airwaves). Here he is an ultra-efficient private detective leading a large agency (not unlike that featured in the first season of Mannix, also created by Levinson and Link). Sporting inventive editing by Edward Abroms and an endlessly clever plot, this is the show at its best and the scenes between the uptight Culp and the ingratiating Falk are an utter joy.

Gillis was, along with Bochco,  the main writer who helped set the tone for the show – his genius for clues would keep him on the series right into the 1990s. In this episode, one of several set in a film studio (always Universal Studios of course as they made the show, and featured again in Fade into Murder below), we apparently see the wrong person get killed and the plot go awry – but this is a fiendishly clever story and Anne Baxter makes for a great villainess. 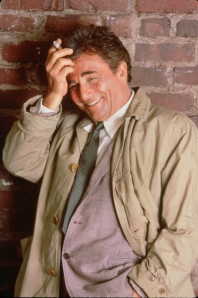 Fischer joined the show after Levinson and Link left to pursue other projects and wrote a huge number of the best of the later episodes, perhaps none more complex and well-plotted than this one, in which Richard Kiley play’s Falk’s unscrupulous boss. The concluding clue is so good the show would re-use it decades later.

Patrick McGoohan was perhaps the finest of all the guest actors on the show – he became great friends with Falk and in total he would appear in four episodes over the years, directing three of those and a further two in which he did not appear. This is an unusual story in that it is one of the few not filmed in LA but relocated to a South Carolina military academy with McGoohan transfixing as the martinet with hidden insecurities. It won him a well-deserved Emmy.

Another episode set around Universal Studios with William Shatner (and in a supporting role Walter Koenig)  as the demanding lead actor of a TV detective series. This episode has great fun riffing on its own show (and Falk’s well publicised clashes with the Studio) but comes up trumps with another clever story and a wonderfully knowing performance by Shatner. This is one of the many stories (six in total) to feature in its cast Falk’s wife, Shera Danese.

Gordon is the mystery author who bumps off her own late nieces’ husband in a particularly grisly and Gothic fashion by trapping him inside a walk-in safe to die of asphyxia. The interplay with Falk is utterly charming here and once again features a great final clue too – one of my favourite actresses, Mariette Hartley, is also here, typically excellent as Gordon’s wily assistant.

McGoohan came back to the show, and promptly won another Emmy, for his performance as a shady political agent. The murder sequence, which builds to a crescendo of extremely short cuts, is handled with consummate skill while some of the scenes with Falk, in one case climaxing in an extended reverse tracking shot, all give a rare patina of gloss and polish to the show in its later incarnation which, compared with its earlier version, tended to be shot much more conventionally. A real highlight from the later years.

Of the great departures the show has undertaken over the decades, including a couple of standard-seeming episodes in which we think we see the killer but which then actually turn things on their head to become whodunits (Double Shock and Last Salute to the Commodore), this is one of the most successful. Fischer has crafted an ingenious tale that takes all kinds of chances, like using a variety of flashbacks and a voiceover in a story that shockingly begins with Columbo at his wife’s funeral. Mrs Columbo, never seen on the show, briefly got her own series in the late 70s (Levinson & Link were powerless to stop the studio) but it quickly sank without a trace. This is an object lesson on how to vary the formula without betraying, despite appearances to the contrary, any of its rigid principles – a class act and a great example of how to have your cake and eat it.

Falk penned this episode himself and perhaps unsurprisingly it focuses to an unusual degree on the detective when he seems to be falling in love with his prime suspect, played with her usual sexy flair by Faye Dunaway. Her relationship with a mysterious younger woman (a pre-Babylon 5 Claudia Christian) is handled with just the right amount of ambiguity and even though the main alibi recycles elements from one of the earliest episodes (the electric blanket from Suitable for Framing), this once again keeps an eye on both plot and character to deliver a genuinely satisfying episode. 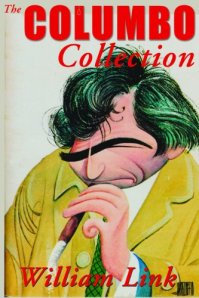 In 2010 Crippen & Landru published The Columbo Collection by William Link, which brought together a dozen short stories featuring the LAPD’s finest. The stories are great fun and could all have worked as launching points for TV episodes though the best of them work considerably better than as mere sketches – the character is brought up to date (he even has a mobile and flat screen TV) but little else has changes. Well worth seeking out. The best book on the show, even if it only covers its 1970s episodes, is Mark Dawidziak’s The Columbo Phile – if you can get your hands on it you really must if you have even an ounce of interest in the show. It’s crying out for an update and we can only hope that Mr Dawidziak will be able to find the opportunity to do so. Incidentally, he has posted his own recollections of Falk here and they’re well worth a look.

For further information about the show, look up the excellent Ultimate Lieutenant Columbo site: www.columbo-site.freeuk.com/

33 Responses to In Praise of … COLUMBO