Posted on 20 September 2013 by Cavershamragu

The 87th Precinct series reaches the decade that fashion sense forgot in a quirky and profane story of prejudice and stereotypes where the squad’s only black officer, Arthur Brown, finally takes centre stage. Built around a bizarre treasure hunt, this novel later served as the basis for a highly atypical episode of my favourite American detective show, Columbo. It all starts with two men killing each other over a photo fragment cut into the shape of a jigsaw piece …

I offer the following review as part of the 2013 Book to Movie Challenge at the Doing Dewey blog – for links, click here; and Friday’s Forgotten Books meme run by Patti Abbott, which today is being hosted by B.V. Lawson over at her In Reference to Murder blog.

“Guy comes in here with a story,” Byrnes said, “what does he expect us to do? Drop everything and go on a goddamn treasure hunt?”

The case seems open and shut – a burglar broke in and killed the occupant, who was able to kill his assailant before also dying. The only oddity is this small part of a photo cut into the shape of a piece of a jigsaw puzzle. Brown and Carella think it’s over but then get a visit from Irving Krutch, an insurance investigator still working on his own time on a 6-year-old bank robbery. The thieves were all killed in a shootout with the cops but the loot – $750,000 to be exact – was never recovered, so his company had to pay up and he lost serious traction on the career ladder as a result. He thinks all the segments of the photo when slotted together

will show the place where the cash was buried. Krutch has a partial list of people he believes were given the other segments of the photo – and has one of his own that he got with the partial list. Carella and Brown find a third piece hidden in the apartment where the two men killed each other. Brown goes undercover as ‘Arthur Stokes’ to try and get some of the other pieces by teaming with a crook also looking for the loot. Before long Brown gets coshed and his low-life partner is killed. Brown figures that one of the pieces may be held by Geraldine, the ex-mistress of the leader of the bank robbers. But she sees through him right away …

“Sure, look at Superspade,” Gerry said, and smiled. “Faster than a rolling water-melon, able to leap tall honkies in a single bound …”
“… who is in reality,” Brown continued, “mild-mannered Arthur Stokes of Ebony magazine.”

This is by necessity a fairly episodic story as Brown and Carella accumulate several pieces of the puzzle while bodies pile up and one imagines that McBain would have created as many segments as he needed to bring the book up to length – at the same time there is a sense of jeopardy as it seems that someone is competing with them to get to the money, killing other likely pretenders along the way. The reveal of the villain is, frankly, no surprise at all and the method by which Brown exposes the guilty party is pretty outrageous, preying on the prejudices of a woman he assumes will be a racist simply because she is from the South. On the other hand, this is what gives the book its flavour – not its by-the-numbers plot but its focus on various stereotypes (gay, straight, black, white) – and

the prejudices that Brown in particular encounters. The language used is the strongest yet in the series and it is clear that while there is much humour, this is also a book with a message and the use of various racial epithets and unpleasant scenarios (like a prostitute who apparently will only go with white men no matter how green the colour of a customer’s money) all help get the point across. So, Arthur Brown finally emerges as a character in his own right in the service of a story that attacks bigotry in a (slightly) concealed manner – it’s not all good but there is a real design at work here and one that is certainly memorable even if it has to share space with some crudities too.

For another detailed review of this book, see what Admiral Ironbombs has to say over at his blog Battered, Tattered, Yellowed and Creased as well as Curt Evans’ focus on the book’s finale and its racial overtones at The Passing Tramp. For a full list of the 87th Precinct mysteries, with links to my reviews, click here. To find out more about the late Evan Hunter and his books as ‘Ed McBain’, visit www.edmcbain.com/

In 1994 the novel served as the basis for perhaps the most unusual episode of Columbo ever produced, here retaining the Brown character but otherwise dumping the 87th and transposing the story from the East Coast to the LAPD. If truth be told, while the adaptation by the late Gerry Day (an industry veteran who passed away in February – there is a typically detailed review of her career by Stephen Bowie over at the Classic TV History Blog) is often remarkably faithful (in fact they even retained the segments of the photo used in the book), this actually works against the show. For starters, such fidelity means that this remains a whodunit, virtually unheard of in Columbo (there were a couple of clever exceptions in the 70s) where nearly always we know who the murderer is from the outset. But it is Columbo rather than Brown (played by Harrison Page) who goes undercover – and it is here that things get weird as Peter Falk adopts a variety of disguises as he tries to find the pieces of the puzzle.

This is an episode that could only have been made very late in the run – it has several in-jokes and is very broad in its humour and I have to say, when I first watched it, I was shocked by it. It feels completely indulgent, with Falk the actor being served rather than the Columbo character, while the tone is essentially jokey, though there is a nice scene with Tyne Daly as a cheerful prostitute (Daly had recently played a murderess on the show so was probably doing this as a favour); Shera Danese, Falk’s wife and a frequent co-star, also appears as Geraldine. In both cases the abrasive language and racist sentiments are completely removed in favour of a more comedic approach. Now that Falk is no longer with us and no more episodes will be made, I look on it with a little more indulgence. Yes, it does feel like a jolly jape made by actors having a good time and not like an episode of the best detective show American TV ever produced; and Falk is so out of character playing a fedora-wearing gun-brandishing tough guy in some scenes that it makes for remarkably disconcerting viewing; and yes, the final clue, which is not from the book (understandably replacing its controversial climax), while much more in keeping with the Columbo format, is apparently not technically doable (i.e. getting a fingerprint off the surface of a coin is said to be impossible).

But it is a fun episode too  – the ‘undercover’ section only takes up about half the episode (that is to say, 45 minutes) but otherwise Columbo is in his usual garb and makes for an amusing break in the format that takes a wild detour in the middle before coming back home again (in this sense it is typical of the later 2 hour episodes that tended to struggle to fill the running time anyway). In addition Harrison Page is very engaging as Brown while Ed Begley Jr brings his usual energy to his playing of Krutch, the insurance investigator who gets the story rolling. If you divorce Undercover from the series it belongs to then actually it is a fairly enjoyable and faithful adaptation of the novel, though unfortunately it does dispense with its thematic underpinning of intolerance and bigotry in society, which probably felt too thin and obvious 25 years later but which does also rob the book of its main raison d’être. For the list of my favourite Columbo episodes (and no, this is not among them), see my post In praise of Columbo.

DVD Availability: Available everywhere in very nice DVD editions with the Blu-ray can currently only be had in Japan as part an astonishingly expensive complete box set that I would love to be able to afford … 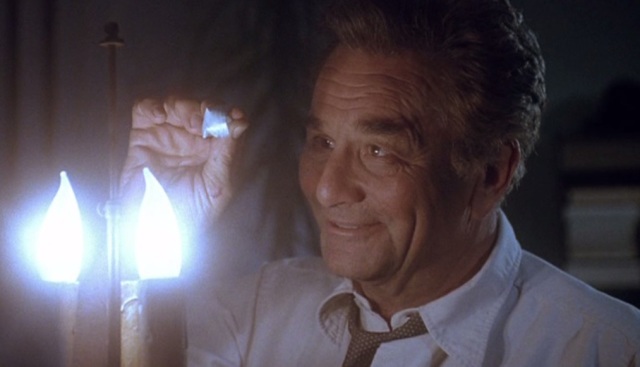