Posted on 5 December 2017 by Cavershamragu

The Basil Rathbone and Nigel Bruce series of Sherlock Holmes and Doctor Watson mysteries came to an end with this, their 14th entry, in which the Baker Street duo battle suave criminals searching London for the secret hidden within three music boxes. No prizes for guessing who the victor will be – but then, the fun is in the journey.

“It’s so fearfully awkward, having a dead body lying about. Don’t you agree, Mr. Holmes?”

The following review is offered for Todd Mason’s Tuesday’s Overlooked Film meme over at his fab Sweet Freedom blog.

Universal Sherlock Holmes # 12
Conan Doyle Source: not canonical
Sample dialogue: “The truth is only arrived at… by the pain staking process of eliminating the untrue.”
Original filming dates: 22 January to February 1946
Sherlock in disguise: no
Universal’s Baker Street Regulars: One of the joys of this series is spotting the appearances of the various members of the stock company of supporting actors who appeared throughout the series in a variety of roles, sometimes as villains and sometimes as victims. In this one we have: Harry “The Henchman” Cording in his seventh role, playing, well, “Hamid the henchman”; Frederick Warlock, Leyland Hodgson and Gerald Hamer appeared for the sixth time in the series; as did Olaf Hytten, here seen as the assistant in the auction house. Ian Wolfe made his fourth appearance, as the police Commissioner; and this was Sally Shepherd’s third appearance, as the tobacconist. 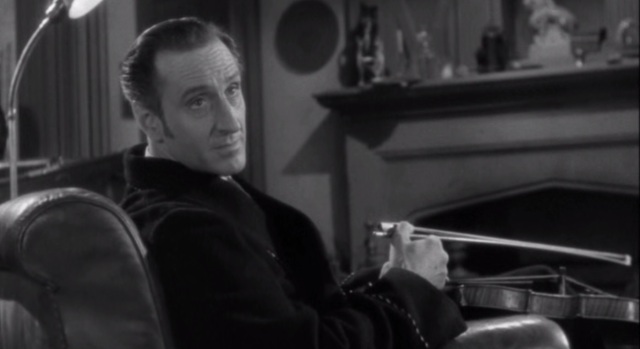 Sherlock Holmes: If you must record my exploits, I do wish you would put less emphasis on the melodramatic and more on the intellectual issues involved.

The story, originally announced as Prelude to Murder, is not directly based on any of the original stories, though there are strong elements taken from “A Scandal in Bohemia” and “The Solitary Cyclist” (which are referenced directly by name) as well as “The Six Napoleons” which was the credited source for the seventh film in the series, The Pearl of Death. This is not nearly as good as that film and is only an average entry in the series – but then, having made a dozen films in less than four years, a bit of fatigue was bound to become evident eventually, as well as a tendency to perhaps look back for inspiration. And certainly there is a ‘greatest hits’ feeling to much of this film. The central plot is modeled very closely on The Pearl of Death, so much so in fact as to almost constitute a remake.

As in that film, a thief steals a valuable object but is captured so soon that he has to hide the item and then sets about recovering it by sending messages to confederates while in jail. The confederates are made up of trio of villains: an older man (Warlock), a young woman with a penchant for disguises (Patricia Morrison, wonderful as the title character) and a murderous henchman (Cording) who is madly in love with the woman. To find the stolen object, they enter into a race against time as they must search in several places to get what they need, with Holmes trying to get there first of course. Dressed to Kill also followed in the pattern of many of the most recent titles in the series by having Holmes square off against a femme fatale – and once again, Holmes and the female villain have a mutual admiration for their skills.

In addition, the basic structure of the story goes back to the second film of the series, Sherlock Holmes and the Secret Weapon, in which a code has been split up in three locations and must all be brought together to be deciphered (this is derived from Doyle’s “The Dancing Men” incidentally). So while the plot is a bit tired and overly familiar, there is much to enjoy here too. There is some great dialogue and Patricia Morison is a wonderful villainess – indeed, she rather steals the show as Hilda Courtney even if she does seem to be channeling Gale Sondergaard sometimes (in one scene she lets off a smoke bomb in Baker Street as part of her plans to best the detective, which is taken from The Spider Woman). There is a great scene in which she seduces an old friend of Dr Watson’s (a very droll performance by Edmund Breon who even removes his toupee on camera to make his scenes even more fun) to retrieve a music box (which is the McGuffin instead of the busts of Napoleon from Pearl of Death). This is capped by a great visual flourish when, after he is killed by her henchman (Harry Cording, sadly no match for Pearl‘s Rondo Hatton), she has to retrieve her fur stole from under him.

On the other hand, while the (admittedly, fairly silly) attempt to kill Holmes by gassing him is fun due to its unnecessary over-elaboration, the film has no real climax, just a confrontation with all the parties. Which is a bit of a shame. On the other hand, Watson gets to do his imitation of a duck to try and cheer up a frightened young girl and, along with the inevitable bumbling, provides the two major triggers for Holmes to solve the case. Plus the film ends with this sweet dialogue, which really does give it a valedictory feel:

Inspector Hopkins: I still don’t understand how you solved it, Mr. Holmes.
Holmes: It’s entirely due to Doctor Watson. He gave me the clue when he mentioned Doctor Samuel Johnson.
Inspector Hopkins: Well, congratulations, Doctor.
Watson: Oh, thank you, Inspector. I don’t think I could have done it entirely without Mr. Holmes’ help, you know. 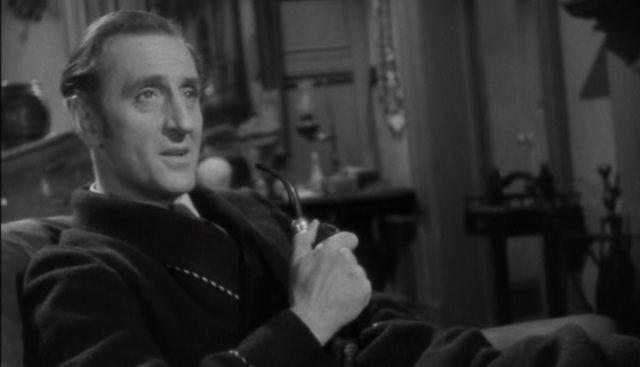 DVD Availability: Available in terrific editions on DVD and Blu-ray the world over, derived from the restorations made by UCLA. All look decent and this one looks very good indeed. Not quite up to the standard of Terror by Night, but very close all the same.

For my microsite devoted to Universal Studios’ Holmes and Watson series, click here.