TRIAL AND ERROR (1937) by Anthony Berkeley

Posted on 9 June 2017 by Cavershamragu 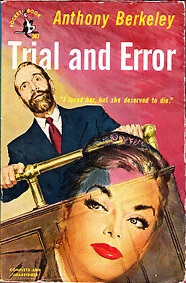 It’s time for a guest post from my blogging buddy Livius, who writes about movies at his marvellous blog, Riding the High Country. And now it’s over to the man himself:

The inverted crime story is one where the perpetrator is known from the outset, or close enough to it, and the thrust of the story is carried forward by our interest in seeing law or its representatives piece together the clues and evidence that will bring the criminal to book. In short, if you’ve ever seen an episode of Columbo, then you know exactly what I mean.

“Yes,” said Mr Todhunter. “Then what it all amounts to is that the man with only a few months to live can’t do anything better than commit a murder, of the type defined. You really believe that?”

That quotation is the premise upon which Anthony Berkeley’s Trial and Error (1937) is based, a scenario that I’d be inclined to term a variation, in more ways than one, on the inverted crime formula. Right from the beginning we learn that Lawrence Todhunter is a man living on borrowed time, that an aneurysm will surely claim his life in a relatively short space of time.  Under the circumstances, I imagine few people would then proceed to arrange a meeting of friends and acquaintances of various spiritual and philosophical points of view for the purpose of surreptitiously picking their brains on how best to utilize the time remaining.

Todhunter is a bit of an oddity though. A middle-aged bachelor and comfortably upper middle class, he lives in the suburbs and has no close dependents. Such a man might be expected to look for the most pleasurable ways of passing his soon to be curtailed life. But not Todhunter, his thoughts run to how he might do something of use, something that would make the world  better place. And so he consults friends, and comes to the conclusion that he should seek out someone who deserves to die, and then set about ensuring that indeed happens. Yet, as with many things in life, the results don’t always come out the way you hope. 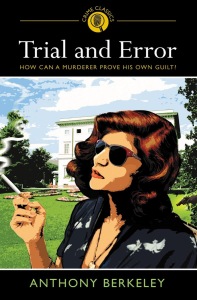 Trial and Error is as much a black comedy as a crime story, the inherent absurdity of the ever growing complexity becomes something of a dark farce, and the character of Todhunter moves from a kind of initial pitiable pomposity towards the arch and sly as complications spin off to meet and mate with further difficulties, producing even more pitfalls, stumbling blocks and so on. There is, of course, a twist in the tale, several of them if we’re to be honest. However, I found the last (the one I guess we are supposed to find the biggest shock) to be something of a letdown. Perhaps it’s just me but I saw it coming a mile off and it left the final section of the book, while still solidly suspenseful at heart, a tad disappointing.

“It’s women of that kind – women and men – who are responsible for nine tenths of human suffering. Evil is rare. I’m inclined to think it’s a pathological phenomenon. Indifference, that’s what is terrible…”

I’ll confess that I don’t know a great deal about Anthony Berkeley, beyond the fact he was an influential crime writer and later a critic, but I have come across comments that suggest he was something of a misogynist, and that this characteristic can be discerned in Trial and Error. To tell the truth, I can’t say I was especially aware of this

I guess this is as a result of the choice and depiction of Todhunter’s victim. While I do feel the reasoning behind the pick was pretty weak and just barely convincing, I don’t buy the notion that it’s driven by this particular prejudice

This was my first Berkeley novel and I’ve got another half dozen titles by him on my shelf still to be read, including two written under his Francis Iles pseudonym. I’ve been led to believe he’s generally regarded highly for his innovative touches and  pushing at the boundaries of crime and detective fiction and I think this novel offers some strong arguments in favor of that assessment. Is it a good introduction to the author? Under the circumstances, I’ll have to leave that to others to say, at least until I’ve dipped a little deeper into his oeuvre myself.

We submit this review for Bev’s Golden Age Vintage Mystery Scavenger Hunt in the ‘cigarette’ category: 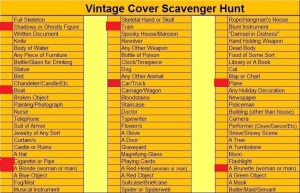 29 Responses to TRIAL AND ERROR (1937) by Anthony Berkeley