Posted on 19 December 2017 by Cavershamragu

As Britain gets ready for a very chilly yule indeed (and no, I don’t just mean the weather), my mind inevitably turns to the comforts of fictional crime!

There are some splendid books being made available for crime aficionados this season and I wanted to share with you some of the ones that have got my pulse racing – some are brand new and some are classic reprints in the wake of the great success of the British Library Crime Classics range so lovingly curated by Martin Edwards.

So here are a dozen of the ones I am certainly most looking forward to – in alphabetical order:

All But Impossible (2017)
by Edward D Hoch
This is the latest collection from Crippen & Landru of the impossible mysteries solved by Dr Sam Hawthorn, originally published in the pages of Ellery Queen’s Mystery Magazine during the 1990s. Hoch was a master and I can’t wait to get my hands on this new volume. Another is promised soon, too!

Beau Death (2017)
by Peter Lovesey
This is the new Peter Diamond Mystery by Peter Lovesey, who after nearly 50 years remains one of the finest detective authors in the business. You can’t miss this.

Mr. Campion’s Abdication (2017)
by Mike Ripley
This one actually came pout in the Summer but I utterly failed to mention this as I was away on my hols – a giant mea culpa as Mike’s continuation of the Albert Campion adventures remain utterly entrancing and a great success in an arena where so many have failed. 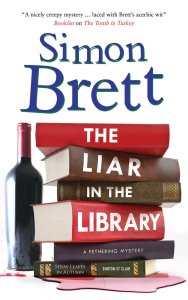 An English Murder (1951)
by Cyril Hare
First published in 1951, this reprint from faber & faber is of one of Hare’s lesser known titles and perhaps overdue some exposure I would venture.

The Liar in the Library (2017)
by Simon Brett
This is the latest Fethering Mystery (the 18th I think) and it is great to see Brett continuing with these one while also  returning to this and the Pargeter and Paris series too.

Magpie Murders (2017)
by Anthony Horowitz
Not always a fan of Horowitz, this is a book that so many people I respect have genuinely loved that I now can’t wait to get my hands on it. Better be good …

Maigret Enjoys Himself (1957)
by Georges Simenon / David Watson (Translator)
The 50th book in the series of new translations being published at a rate of one a month by Penguin. It originally appeared in 1957 as, Maigret s’amuse. Maigret is not for everyone – there is a kind of interior, almost stream of consciousness, style to his writing but it is utterly hypnotic if you get in its sway.

The Nursing Home Murder (1935)
by Ngaio Marsh
Anyone who reads this blog will know that I am not necessarily a big fan of Dame Ngaio – sorry, and I do keep trying, but so far we have just not been in sync. However, I love the look of this new edition of her 1935 book reprinted as part of the Detective Club Crime Classics, which comes with an intro by Stella Duffy. In fact, I just bought it as a Christmas gift for one of my amazing nieces. I definitely see myself trying it again (the TV adaptation staring Patrick Malahide was quite good too as I recall) – I may even pinch it from my lovely niece when I see her in Australia next month.

The Perfect Crime: The Big Bow Mystery (1892)
by Israel Zangwill
Generally held to be the first locked room mystery novel, and usually published just as The Big Bow Mystery, this welcome reprint (in the Detective Club series) comes with a new intro by John Curran. This is one of those books that was originally published with its ending concealed as a marketing gimmick, to see if readers could come up with the conclusion on their own – I think it is probably too outlandish a solution to be easily derived from the clues, but is very hard to forget and well worth getting the book in a decent edition (though it has been in the public domain for a very long time).

Quick Curtain (1934)
by Alan Melville
Originally from 1934 (it comes on the new batch as part of the British Library Crime Classics), I really look forward to discovering this new (to me) book, not least as I am a sucker for mysteries set in the theatre. Melville was probably better known as a writer of musicals and comedies (I remember quite enjoying the film version of his popular play, Simon and Laura) and only wrote a few mysteries.

The Rynox Mystery (1932)
by Philip MacDonald
I love MacDonald for his energy and originality. He was massively prolific in the 1930s before focussing on screenwriting, going out as a novelist with one notable final success, The List of Adrian Messenger. This is one of his stand-alone books and the edition has an introduction by MacDonald himself (written in 1963) and comes in the Detective Club Crime Classics reprints series. I previously reviewed this remarkable and inventive book (and the film version), right here.

Somebody at the Door (1943)
by Raymond Postgate
Postgate is best known for his legal mystery, Verdict of twelve, this book is unknown to me and comes in the new release from the British Library Crime Classics range – this one is set in winter in a train, which sounds fab!

45 Responses to Crime at Christmas