Posted on 28 December 2017 by Cavershamragu

Bev over at My Reader’s Block has been hosting her vintage mystery reading challenges for much longer than I’ve been blogging and it’s been a pleasure to take part all these years.

I read a lot of John Dickson Carr this year and, truthfully, all of them were utterly exceptional. Biggest surprise? How much I enjoyed paperback legend Carter Brown!

DEATH IN THE CLOUDS (1935) by Agatha Christie [guest post]

TO HAVE AND HAVE NOT (1937) by Ernest Hemingway 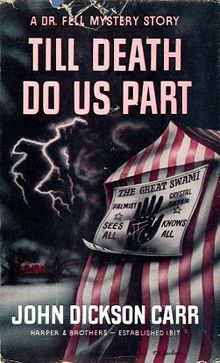 MINISTRY OF FEAR (1943) by Graham Greene

GREEN FOR DANGER (1944) by Christianna Brand

It was great to-re-read some of the early Morse and Matt Scudder novels this year, but again the great surprises came from Stark House Press with Peter Rabe and Lou Cameron as fascinating discoveries to me.

THE SILENT WORLD OF NICHOLAS QUINN (1977) by Colin Dexter

THE RIDDLE OF THE THIRD MILE (1983) by Colin Dexter

Thanks as always Bev for hosting and for cajoling us all – it’s been a blast. Sorry not to be around for the 2018 challenge.