What follows is a celebration of the achievements of my favourite Golden Age mystery writer of them all, John Dickson Carr. It is subdivided into this longish essay and has three additional bibliographies:

The reader is warned that the following post is utterly partisan and nothing less than a love letter to the work of the master of misdirection and the locked room mystery – and the writer who, often when writing as Carter Dickson, also produced some of the funniest of Golden Age mysteries and some of the best radio mysteries of the era.

“Because,” said the doctor, frankly, “we’re in a detective story, and we don’t fool the reader by pretending we’re not. Let’s not invent elaborate excuses to drag in a discussion of detective stories. Let’s candidly glory in the noblest pursuits possible to a character in a book” – From Dr Fell’s ‘Locked Room Lecture’ in The Hollow Man

Although variously attributed to Terry Carr and Brian Aldiss, it is now thought that it was Peter Scott Graham who first quipped that, “The Golden Age of science fiction is thirteen.” I feel the same way about any revered era as I probably did most of my important literary detective work in my teens. And I know exactly when I had my first encounter with the work of the masterful Mr Carr: August 1983, when I was 14 years old. That month saw the re-printing of The Reader is Warned in Italy. I absolutely loved the atmosphere, the humour and the sheer cleverness

of the plotting and quickly found that another book, also under the ‘Carter Dickson’ byline and still starring Sir Henry Merrivale had just been published, Nine and Death Make Ten (aka ‘Murder in the Submarine Zone’). This was another winner and I was desperate to find more of the author’s books – it turned out that both my parents had read him and my mother, being in particular a fan of historical fiction, had a copy of Fire, Burn (1957) one of a trio of mysteries Carr wrote that combined fair play deduction with time travel. This was also my first encounter with Carr’s delightful ‘Notes for the Curious’, which he appended to these books and which were full of fascinating additional historical details.

” … the deception is built up, sustained with teasing hints that can be interpreted in half a dozen different ways, and at last revealed with staggering skill.” – Julian Symons in Bloody Murder

Not all the sources I initially consulted on Carr were kind about his body of work. Barzun and Taylor are famously sniffy and Bruce F. Murphy in his encyclopedia damns with faint praise and clearly has little interest in the author. On the other hand Julian Symons as quoted above, while far from being without criticism, was full of admiration for the cleverness of Carr’s stories. All this activity in Italy coincided fairly closely with Carr’s work being championed in the US by Douglas G. Greene, who has probably done more than anybody else over the decades to help new readers discover the joys of the locked room mystery. In 1980 he edited The Door to Doom, a wonderful anthology that not only brought together several classic short stories and radio plays but also included several pieces that Carr wrote for The Haverfordian, his school magazine. Most valuable of all perhaps was the detailed bibliography that provided a truly enticing glimpse into the dozens of novels, plays and short stories written by Carr over

a period of some 45 years. I wore out a copy at the library near friends in the UK and every year I used to take it out, until one day I was able to buy my own copy at the wonderful Murder One bookshop, which sadly is no longer (or rather, not as a shop in central London – they do still trade as a mail order company at least). Three years later Greene edited The Dead Speak Lightly (1983), a further collection of some of the Carr’s best radio plays – this volume is a little tougher to track down but is well worth the effort (I got my copy at the late lamented Mysterious Bookstore in San Francisco). TomCat has provided a detailed review of The Dead Speak Lightly over at his Detection by Moonlight blog.

“No one in the history of the genre could match him for sheer sustained ingenuity when it came to devising reader-bamboozling locked room and other impossible mysteries.” – William L. DeAndrea in Encyclopedia Mysteriosa

In the 80s Greene with the likes of Robert S. Adey, Jack Adrian and Tony Medawar helped bring a new generation of readers to Carr’s work through various anthologies and critical studies. This renewed interest was further enhanced by the results of a poll undertaken by Edward D. Hock on behalf of the Mystery Writers of America in which 17 authors (including Adrian, Barzun, Jon L. Breen, RE Briney, Jan Broberg, Ellery Queen, Greene, Howard Haycraft, Hoch himself, Marvin Lachman, Richard Levinson & William Link, Bill Pronzini, Symons and Donald Yates) were asked to come up with a list of their favourite locked room mysteries. Carr was, as you might have gathered, very well represented – the list became quite well-known and here are their top 10:

For decades Carr invented complex whodunits which were not just wonderfully atmospheric but also funny and on top of which had that all important extra, a massive and utterly delectable cherry on top: the impossible crime. Murderers would dispatch victims on snow, sand and tennis courts and leave no footprints; men would dive into swimming pools and apparently vanish; rooms with all entrances and exits guarded would be impossibly penetrated; and in one of my absolute favourites (He Wouldn’t Kill Patience from 1944), a person apparently commits suicide by sealing a room with tape on the inside and then turning the gas on – and yet, it’s actually murder! To solve the cases are either the satanic Henri 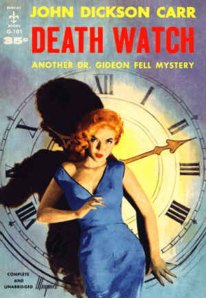 Bencolin, the GK Chesterton inspired Dr Gideon Fell and perhaps best of all, ‘the Old Man’, the highly undignified and yet utterly brilliant Henry Merrivale, whose cases were published as by ‘Carter Dickson’. These were, as I mentioned, the first that I read and perhaps remained my preferred adventures. But there are also the historical mysteries involving hints of the supernatural (such as the 1937 classic The Burning Court). In all there were over 70 novels, approximately the same number of mysteries written for radio and about half as many short stories, including the wonder Colonel March stories collected in The Department of Queer Complaints  (1940).

There is just so much to choose from – could it all be good? Well, no. Carr (and ‘Carter Dickson’) were at their peak throughout the 30s and 40s. After that Carr suffered from some health problems and the quality did occasionally drop off, though Fell novels published as late as The House at Satan’s Elbow (1965) and Panic in Box C (1966) are still to my mind tremendously entertaining and delightfully clever – and I really like some of the later historical novels too, such as The Devil in Velvet (1951) and The Bride of Newgate (1950).  Can I generate a list of (only) my top 10 favourites? Well, if I must, then today these are my top 10, though this might change to another batch of wonderful books on a different day of the week. 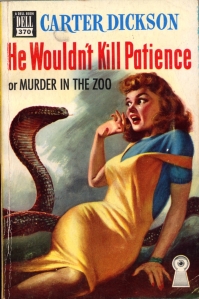 Those marked with an asterisk (*) originally appeared under his ‘Carter Dickson’ pen name.

Carr’s work, thanks largely to Greene’s efforts, had a major resurgence in the 80s and early 90 and many of his books were reprinted by International Polygonics and Greene himself has continued the good work through his Crippen & Landru imprint: www.crippenlandru.com/

All over the blogosphere there are many of Carr’s fans writing about him and discovering his work anew or re-presenting it to potential new readers. Patrick over at At the Scene of the Crime is devoted to impossible mysteries, as is TomCat, while the Puzzle Doctor over at In Search of the Classic Mystery is planning to review all the Merrivale books and has produced a good guide to them

here: http://classicmystery.wordpress.com/sir-henry-merrivale/. Particular mention should be made of the many essays by Pietro De Palma, a frequent visitor to these shores. Although he also blogs in English at Death Can Read, most of his essays on Carr are in Italian – for those of you able to read the original, or make use of BabelFish Translate and the like, there is much here that I think you will enjoy – especially his essays on the novella The Third Bullet; the ‘Locked Room Lecture’, which I quoted above by Carr, here and on locked rooms more generally here and here. He has also written on the first four short stories featuring Bencolin as well as a look at Mary Shelley, automatons and The Crooked Hinge.

The most important book on Carr and his life is Douglas G. Greene’s The Man Who Explained Miracles (1995). The other main critical work in English on his books is ST Joshi’s John Dickson Carr: A Critical Study (1990). There are also works not in English that I have not sampled I’m afraid. See also such web essays as those found at the Mysterylist.com and the GADetection list. And then of course there is JDCarr.com too …

Let all these erudite enthusiasts assist you in participating in the most ingenious and diverting of murder mystery conventions and surrender to the sheer pleasure of what Carr termed, “The grandest game in the world”.