J is for … Jonathan Latimer

Kerrie’s 2012 Alphabet of Crime community meme over at her Mysteries in Paradise blog continues this week and has reached the letter J. As part of my contribution, I offer a look at the work of Jonathan Latimer, one of the best Golden Age authors of the hardboiled school you’ve probably never heard of …

Born in Chicago on 23 October 1906, Jonathan Wyatt Latimer first worked as a journalist on the crime beat before making his literary mark in the 1930s with a series of tough screwball mysteries feature the eternally sozzled private eye Bill Crane. After the outbreak of the Second World War, during which he served in the Navy, he largely abandoned prose for a long and successful career as a Hollywood screenwriter that stretched from adaptations of Hammett and Woolrich to original scripts for such successful television shows as Perry Mason and Columbo. He died in La Jolla, California (where he had been friends with Raymond Chandler in the 40s and 50s) on 23 June 1983, outliving virtually all of his hardboiled contemporaries. But let’s go back to the beginning of his career …

In total Latimer wrote nine mysteries as well as a ‘straight’ novel, Dark Memory originally published in 1940 and now rather hard to get hold of (sadly I do not own a copy). I do however have the rest on my shelves I am glad to say. Latimer’s main character in the 1930s (and his only series character in fact) is William ‘Bill’ Crane, who first appears as an inmate in a mental asylum in Murder in the Madhouse in 1935. He is a private eye, with his partner Doc Williams, who 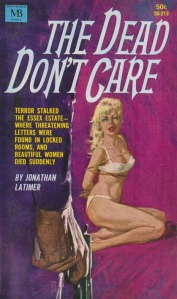 spends pretty much all of his cases either inebriated or hung over but who also solves his cases through proper deductive reasoning as well as some barely ethical escapades. This is seen perhaps at its best in The Lady in the Morgue (1936), though the first four cases are all highly entertaining and highly unusual in their combination of hardboiled characters and fair play detection, as likely to include a fist fight as a locked room mystery. Rex Stout’s Nero Wolfe mysteries are the only ones to really match this aspect of his work, which in its screwball aspects looks forward to the work of Craig Rice, Fredric Brown, Richard Prather and, in its mixture of hardboiled characters and classical soft-boiled plots, Bill Pronzini.

“… his writing is notable for its corrosive humour, off-the-wall perspective, bizarre settings and protagonists who solve classical crime puzzles through a woozy but instinctive grasp of the deductive process” – Woody Haut in ‘Heartbreak and Vine’

In the fifth and final Crane case, Red Gardenias (1939), Latimer repaid the debt to Hammett’s The Thin Man (1934) by taming or anyway domesticating the wild PI and marrying him off too. Crane works for a New York agency run by the mysterious Colonel Black, who incidentally appears as a kind of Sherlock Holmes figure in The Search for My Great Uncle’s Head (1937), an old-fashioned country-house mystery published by Latimer under the pseudonym ‘Peter Coffin’. On the other hand, Latimer also created a novel so tough that it took decades to be published uncensored with Solomon’s Vineyard (1941).

Crane was played in the cinema by Preston Foster in three B-movies made by Universal: The Westland Case (1937), adapted from Headed for a Hearse, followed in speedy succession by The Lady in the Morgue and finally The Last Warning (both 1938), from The Dead Don’t Care, with Frank Jenks cast as Doc Williams in all three.

Latimer’s output was perhaps a little limited in terms of quantity (though on par with Chandler and Hammett in terms of novels, though he produced no short stories that I know of), though he was much moire successful as a screenwriter than either of them in terms of productivity. His career as a novelist was interrupted initially by his wartime service in the Marines and then by his work in Hollywood. His work before the outbreak of war though remains well worth seeking out however:

These are some of the most alcohol-soaked books in the genre … Despite its hardboiled flavour, the series did not stint on detection; Latimer inserted clues and followed up the deductive process as assiduously as a writer of classic mysteries. – Bruce F. Murphy

After the Second World War Latimer focused almost exclusively on his work as a screenwriter, first for cinema and later for television. As well as several fine examples of Film Noir – such as the fatalistic They Won’t Believe Me (1947), and an unmade adaptation of Hammett’s Red Harvest – Latimer worked in a variety of genres including comedies, westerns, war movies, historical dramas amongst a wide range of titles. Along with the charming Topper Returns (1941), which turned the supernatural comedy series into a murder mystery starring the delectable Joan Blondell, one should also single out for praise the fine 1942 version of The Glass Key starring Alan Ladd, Brian Donleavy and Veronica Lake. From the late 1950s, after a couple of belated and decidedly less successful novels, Latimer worked exclusively in television. In total he wrote 32 episode for the original Perry Mason series 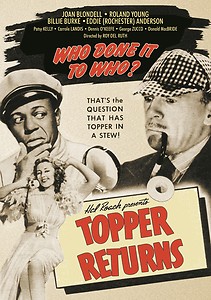 starring Raymond Burr (some sources claim one less, probably because IMDb in error have omitted the writing credit for ‘The Case of the Frightened Fisherman’, written by Latimer, and first screened on 27 February 1964). These credits are made of up of seven adaptations (six from Erle Stanley Gardner and one from Hugh Pentecost) but the other twenty-five episodes are original scripts. For a truly exhaustive look at Latimer’s work on Perry Mason, visit the show’s wiki at: www.perrymasontvseries.com/wiki. Latimer was, along with Jackson Gillis, the most prolific writer for the Perry Mason show (aside from its script editor Samuel Newman).

The distinctive mark of Jonathan Latimer is an irresponsible gaiety that marks out his work from the ordinary competent hard-boiled novel. – Julian Symons

He then followed Gillis to work on an episode of Columbo, ‘The Greenhouse Jungle’, which incidentally reunited him with Ray Milland, the star of his earlier John Farrow collaborations The Big Clock, Alias Nick Beal and Copper Canyon, as the guest villain. The best of his screenplays are probably those to be found in his long collaboration with director John Farrow (husband of Maureen O’Sullivan and father of Mia Farrow):

21 Responses to J is for … Jonathan Latimer