Posted on 5 December 2014 by Cavershamragu

From its mid 1930s setting to its convoluted murder method, this is an affectionate (if sui generis) hommage to the Golden Age mystery – from a seemingly unlikely champion, the angry young ironist of 1950s British literature, Kingsley Amis. But he was a huge fan of John Dickson Carr and this is a clever combination of a traditional detective story with the author’s trademark fascination with sex and class, told from the point of view of Peter, a fourteen-year-old boy on the brink of entering the adult world.

The colonel went to his shelves and returned with a book called, it transpired, The Hollow Man. “You might find this amusing. Be sure to leave it on the hall table when you depart. Thank you, and good afternoon.”

It is the summer of 1936 (we knows this only indirectly from a newspaper carrying news of the death of ghost story writer MR James) and our story is seen entirely through the eyes of Peter Furneaux. His main interests are big band music (Amis gleefully gets to use the N word when having his older characters casually and without overt racist intent to refer to American jazz players), model airplanes (his father, Captain Furneaux, was shot down in the first world war, losing most of the use of his right arm) and best of all, sex. Thankfully this is not a book about the embarrassments and social failures of a gauche adolescent but quite a sweet tale, though admittedly a bit naughtier and ruder than one might expect in a traditional whodunit! But then, it was the 70s when Amis was writing, though there is undeniably an edge here because Peter’s initiation comes through a woman twice his age – had the sexes been reversed, this would be very hard to accept. But Amis makes it clear that he knows very well what he is doing and that there will be a price exacted …

What he had imagined so often and so long, and what actually happened on Mrs Trevelyan’s bed, resembled each other about as much as a fox-terrier and a rhinoceros.

This novel is one-part humorous bildungsroman but also celebrates the classic detective story, beginning with the theft of an ancient skeleton – nicknamed ‘Boris Karloff’ – from the local museum. The very eccentric Colonel Manton decides to take charge, for no great reason other than he is bored with his lot. At a local dance Peter and his father sit at a table with their neighbours Mr and Mrs Trevelyans, the Hodgson, whose daughter Peter rather fancies despite her being so stand-offish, and Mr and Mrs Langdon. A local journalist, Christopher Inman, is also at the table  – a little the worse for wear after too many drinks, he  accuses all of them of having secrets that he might reveal in his local rag.

“We detective johnnies like to get a feel of the atmosphere surrounding an affair such as this.”

It’s not long after the confrontation at the dance that Inman, fatally stabbed in the head, arrives outside Peter’s house and dies after uttering a few non-sensical words while Mrs Trevelyan rushes off to get the police. Manton takes charge, and is clearly having a great time lording it over his less bright juniors – but he also takes a shine to Peter and lends him his copy of a John Dickson Carr classic, from which Amis quotes extensively and which may hold the secret to a complicated case. The problem is that all the suspects – those round the table that evening at the dance, have solid alibis except for Mrs Trevelyan, who like Peter was at home but neither could have hit Inman with the necessary force given their rather petite frame. While Peter is excited about the prospect of investigating a murder, he is perturbed that his father is one of the suspects, even after he is apparently attacked in their home (sadly, there were no witnesses). But Peter is even more enthralled by his affair with the kindly Mrs Trevelyan, who dispenses much wisdom to the callow youth. Manton and the police start looking to crack some alibis, especially that of Mr Hodgson, an ex-copper with a chip on his shoulder now working as a private inquiry agent.

“After all, the whole raison d’être of a murder story is to fool the reader. Isn’t it?”

This book is more Amis than Carr, but I did enjoy the fairly complex murder method employed by the murderer. Nick over at Existential Ennui gave this book a fine review, pointing to some valuable material on Amis and his affection for Golden Age fiction, which I hadn’t really taken on board before. I should have though because I did know that Amis was best friends with the composer Bruce Montgomery, who wrote Carr-style mysteries as ‘Edmund Crispin.’ The murder plot itself is perfectly competent if no great shakes – but Amis is clearly having lots of fun, especially when he helps his readers to the the pages with the most salient clues – in my edition (the 1985 paperback reprint, pictured at the top of this review), it appears thusly:

“Those who wish to pit their wits against the author’s and solve the mystery for themselves are advised to study pages 61, 82 and 160”

One of these takes you to a very long extract from Gideon Fell’s ‘Locked Room lecture’ from The Hollow Man (aka The Three Coffins). This is why I submit this review for Bev’s 2014 Silver Age Vintage Mystery Challenge bingo in the ‘Locked Room’ category as it is so devoted to Carr, with his classic impossible mystery crucial to the unravelling of the plot: 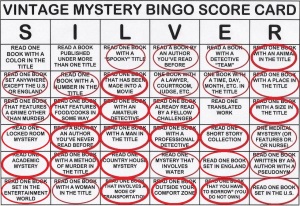 42 Responses to THE RIVERSIDE VILLAS MURDER (1973) by Kingsley Amis