Posted on 2 February 2016 by Cavershamragu 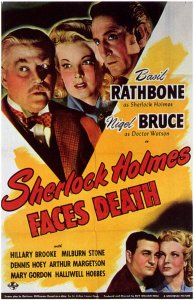 Not many may realise that The Abominable Bride, the marvellous Victorian-era seasonal special of Sherlock starring Benedict Cumberbatch and Martin Freeman as Holmes and Watson, and this entry in the Rathbone and Bruce series share a canonical link as they were both derived Conan Doyle’s ‘The Musgrave Ritual.’ This entry is, rightly or wrongly, also generally considered to be when the Universal series really hits its stride. Gone are the Nazi spies (and Rathbone’s Caesarian haircut), replaced by lashings of Gothic mood set in a semi-modern world.

Universal Sherlock Holmes # 4
Conan Doyle Source: The Adventure of the Musgrave Ritual (1893)
Sample dialogue: “I love things that have no meaning.” (Alfred Brunton)
Original filming dates: Starting on 12 April 1943
Sherlock in disguise: No
Universal’s Baker Street Regulars: One of the joys of this series is spotting the appearances of the various members of the stock company of supporting actors who appeared throughout the series in a variety of roles, sometimes as villains and sometimes as victims. In this one we have Gavin Muir (3/4) as Philip, one of the three Musgrave siblings; Gerald Hamer (2/5) and Olaf Hytten (2/6) as two of the recovering servicemen; Hillary Brooke (2/3), as Sally, the heir to the Mugrave title; and Frederic Worlock (2/6) as another ill-fated member of the Musgrave family.

The original story:
This is one of the most unusual stories in the canon in one respect at least – it is in fact narrated by Holmes rather than Watson. The story deals with the disappearance of the butler Brunton and the maid Rachel Howells from the home in Sussex of Reginald Musgrave. Brunton was serving his notice after being discovered handling a family heirloom, a document known as the ‘Musgrave Ritual.’ Holmes is able to decode its apparently meaningless phrases to discover Burnton’s dead body in a family crypt and the remains of Charles I’s crown. 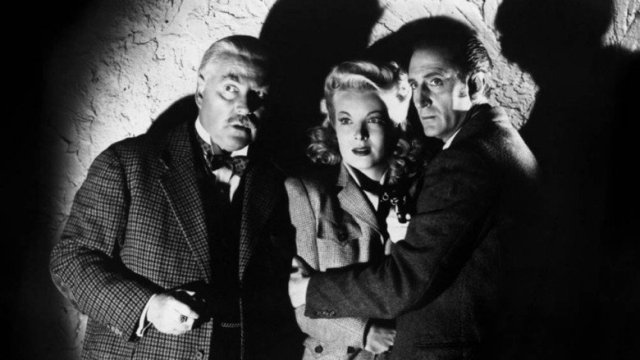 The Film
This film is only loosely inspired by the story, though Brunton the butler and the maid and the ritual (albeit completely re-written) leading to a treasure in the crypt, are all retained pretty faithfully. This was the film that saw a crucial change in style, with director Roy William Neil taking over also as producer and John B Goodman installed as the new art director. The style from now on would be spooky and Gothic and references to the war only tangential.

Dr. John H. Watson: Ghosts don’t stab people in the neck, do they? Or do they?
Sherlock Holmes: Not well-bred ghosts, Watson.

Holmes doesn’t appear in the opening 10 minutes – this is instead devoted to introducing the gloomy Musgrave manor and giving some welcome additional space to Watson, who is there to help with the care of recovering servicemen (this is the only war reference in the film). When his assistant arrives one dark and stormy night and says he was brutally attacked, Watson asks Holmes to intercede. Soon members of the Musgrave family start being bumped off. 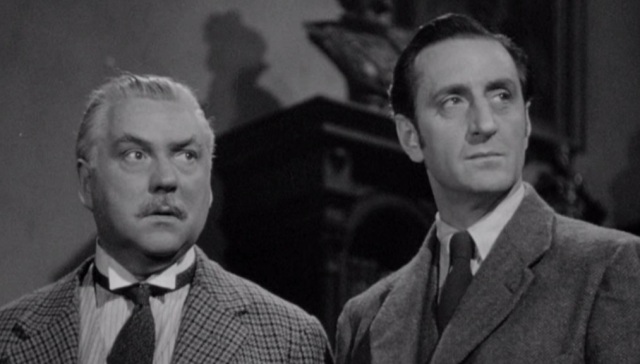 The plot does not in fact make a lot of sense, giving the impression that in the rush to make the story as horror-tinged as possible plausibility and plot relevance was just abandoned. Thus, there are a lot of amusing but irrelevant touches, like a clock that strikes 13, a blood-thirsty raven and a lightning strike during the reading of the Ritual. There is also that stylistic no-no, a lying flashback (the sort of thing Hitchcock himself would be pilloried for in his films Stage Fright and I, Confess). And why on earth Lestrade of Scotland Yard is investigating a case in Northumberland (England’s most northern county) is anybody’s guess, especially as he is incredibly stupid here, making a series of asinine decisions and even getting himself lost in the manor’s secret passages.

Sherlock Holmes: … these egomaniacs are always so much more chatty when they feel they have the upper hand.

But there is also much to love here – along with its rich Gothic atmosphere (both in the lighting and the settings, making good use of sets left over from Universal’s Dracula and Frankenstein films). And then there is the splendid payoff in the ritual itself. While in the original it proves to be a code to the location of a treasure by giving directions between trees outside the house, screenwriter Bertram Millhauser turns his newly worded Ritual into a gigantic chess game played by humans on the floor of the manor. The Universal Holmes and Watson films were always planned and produced in batches of three to fulfill their contractual obligations to the Doyle estate and this film was the first of a trio, continuing with The Spider Woman and then concluding with The Scarlet Claw, that would in fact see the series at its absolute best. It is a great jumping on point for newbies and great fun for anyone but the most severe of Holmes aficionados.

DVD Availability: Available in terrific editions on DVD and Blu-ray the world over, derived from the restorations made by UCLA. All look decent – some, such as Sherlock Holmes and the Voice of Terror, looks absolutely terrific. Sherlock Holmes Faces Death looks decent but not great, not having been able to use an original camera negative. The encoding on the disc is also not of the best sadly, with much evidence of video noise in many scenes.