Posted on 14 September 2014 by Cavershamragu

I’ve been looking to sample this author’s weird fiction for years after hearing him compared with LP Davies, one of my favourite British pulp authors of the 1960s. So I have decided, in my usual fashion, to start at the beginning with his debut, a Cold War tale of biological weaponry with its roots in Nazi experiments that combines espionage and horror with a dash of SF – or as the blurb has it:

“A novel of action, horror and emotion”

I offer this review as part of Bev’s Vintage Golden Age Mystery Challenge; and Rich Westwood’s celebration of all things 1958 over at his Past Offences blog.

“This isn’t science, it’s madness, mumbo jumbo, the three-headed devil sitting on the ruined church. no organism can behave, can be made to behave like this.”

So what kind of book is this exactly? It begins with General Charles Kirk, the permanently under-heated head of Her Majesty’s Foreign Intelligence Office, learning that a remote region in the the Soviet Union some 300 miles wide is being forcibly and secretly cleared. Right away he thinks this is the projected landing area for a returning space probe, proving that the Russkies have conquered space and world supremacy will thus not be not far behind. He’s wrong though, as becomes clear in one of the book’s most memorable sections, when a British ship is told to get out of the nearby port but is then sunk by other vessels fleeing the area.

“The old ship seemed to sway softly, almost normally in the passing wash as if uninjured, and then she began to die”

The survivors make it to one of the abandoned villages and in the fog find a nightmare that will envelop and destroy them all. This sees Blackburn at something like his best, building nicely on the sense of mounting horror without ever getting too specific about what is actually happening. We are left in no doubt though that what is menacing the sailors is something elemental and organic that has taken a terrifying shape. The Russians eventually admits to the Americans and the British that there is some sort of plague afflicting them – one imagines initially that it is one of their bio-weapons that has got out of hand, but sadly not. They have no idea what it is – all they know is that it kills men and turns women into a human-fungal hybrid.

Back in good old England Tony and Marcia Heath live in a University town, seemingly contented after his stint working for a government research unit, the stresses of which almost ended their marriage. But all is not well even now as there have been a series of deaths in the village and there are inklings that the deadly plague has reached Britain’s shores. It’s not long before Tony’s old boss asks for him to come back to brief Kirk on just what the mutated germ might be and how long it will be before the whole world succumbs to it. And where did it come from? Well, all is explained courtesy of a flashback to Nazi Germany that includes a guest appearance by Heinrich Himmler himself:

“But I! I would use everything in my power to end this war even if I made the name of Germany stink in the nostrils of the world for a thousand years.”

This ultimate in genetic warfare is the brainchild of the diminutive Rosa Steinberg but it seems that even the Nazis thought it was a bit much. Her experiments, interrupted at the end of the war, have clearly borne fruit and so the novel turns into a race against time to find an antidote and Rosa, who from name to deed seems to be imbued with a strong sense of the olfactory. Rather pleasingly, it is Marcia rather than David or Kirk who connects the dots and realises that it must be Steinberg behind it all. Her husband asks her to leave the village and head off to far away Wales (!) but she gets a hunch and seeks out another member of the University faculty who, by a whopping coincidence, was part of the army contingent who arrested Rosa in 1945.

“There was no movement, no motion, but just behind her she could hear soft breathing”

This gets her and David into serious trouble when they get trapped by Rosa and, in time-honoured serial fashion, tied up in a cellar with only minutes to spare before being exposed to a fate worse than death. Or anyway, the results of the monstrous germs that Blackburn manages to describe in indirect but still fairly disgusting details (basically imagine your whole insides invaded by mushrooms that then decide to start sprouting very vigorously …). At a time when pandemic alerts are forever in the news, there is something both scary and amusingly naive about this story. The book is highly reminiscent of John Wyndham in its very British tone and ambience (though the narrative actually also moves to Germany, Russia and the US) though parts of it aren’t very well written frankly. Some of Blackburn’s dialogue especially is very juvenile and Boy’s Own – take Rosa’s triumphant speech to her captives for instance:

“Yes, it was I. All the time I was here waiting for you, and you never knew, never guessed, never suspected, until this little fool thought she would play detective and led you here, right into the hollow of my hand.” 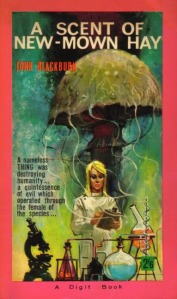 On the other hand, the basic idea is solid if unlikely (the hosts would never survive the trauma caused by the incubation period) and there is no denying the vigorous push of the storytelling. The main set pieces (especially one involving a woman who has locked herself away with what she thinks is tooth ache and who eventually has to be broken out of the room) are very vivid, showing off the author’s penchant for delivering horror and Gothic effects in down-to-earth surroundings. The plot also has some very nice surprises and although I had an inkling, I still fell for the well-constructed double-bluff involving Rosa’s secret identity. This mixture of espionage and lightly dusted SF-horror has flaws but leaves a pungent and memorable aroma – easy to find and well worth a quick read.

Movie trivia – the rights to the book were optioned by Hammer Studios – although ultimately nothing came of their plans, promotional artwork for the project created by Tom Chantrell can now be viewed online by visiting the ‘unfilmed’ section  Hammer Horrors poster site at: http://hammerhorrorposters.weebly.com/

I submit this review for Bev’s 2014 Golden Age Vintage Mystery Challenge bingo in the ‘medical’ category: