TO HAVE AND HAVE NOT (1937) by Ernest Hemingway

Posted on 16 October 2017 by Cavershamragu 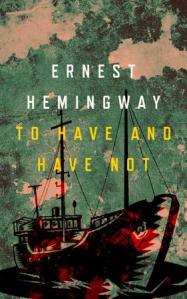 A tale of smuggling between Cuba and Florida, this is generally considered one of Hemingway’s lesser works, which may actually explain why it made surprisingly good movie fodder. The hardboiled story of downtrodden boat-owner Harry Morgan was famously filmed with Bogart and Bacall in 1944 and later with Audie Murphy too. However, my favourite version is the one that came in between, The Breaking Point, starring John Garfield, Patricia Neal and the great Juano Hernandez, now available from Criterion.

I submit this review for Bev’s Vintage Mystery Challenge; and Tuesday’s Overlooked Film meme hosted by Todd Mason over at Sweet Freedom.

“Don’t be so tough so early in the morning. I’m sure you’ve cut plenty people’s throats. I haven’t had my coffee yet.”

Expanded into a novel from some shorter pieces featuring Morgan from 1934 and 1936, the book as a result does have a somewhat episodic feel. It also uses multiple narrators, which tends to also make it feel somewhat fragmented. The book is subdivided into three seasons – Spring, Autumn and Winter – and traces the experiences of Harry Morgan during the Depression as he travels on his fishing boat between the Florida Keys and Cuba to make a living. Cheated out of his earnings, he gets mixed up in various smuggling rackets to make ends meet, with predictably dark and dire results.

To help the working man he robs a bank and kills a fellow works with him then kills that poor damned Albert that never did any harm. That’s a working man he kills. He never thinks of that.

The book uses racist language (the n word and many references to “yellow stuff”) that really grates and makes it feel dated more than merely set in past. In addition, given the way it was composed, it does sometimes lack a uniform feel, not always holding up very well as a novel in terms of development as it does seem to stop and start a few times too often. Having said that, the experimental use of multiple narrators (Harry narrates the opening himself, then we shift to the third person, and concludes with the point of view of Mary, Harry’s wife with other switches and narrators in between) is handled quite well and we do get a fascinating view of Harry from multiple perspective, not all of them flattering. But throughout it all, Harry remains a compelling character, and the depiction of the grim life during the depression well done without toppling into heavy-handed social commentary. In addition there is some surprisingly terse and well-handled action scenes and a grim finale as experienced from the perspective of Harry’s wife that certainly pulls at the heart-strings very effectively.

The story goes that director Howard Hawks bet Ernest Hemingway he could make a good movie of even his worst book – to which Hemingway retorted that not even he could make a good movie from To Have and Have Not. Ultimately Hemingway and Hawks thrashed out a way of adapting it by turning it into a sort of prequel, so that the resultant 1944 film of that title had little to do with the book. But it cemented the partnership of Humphrey Bogart and Hawks discovery Lauren Bacall off-screen and on and was a hit. It is a thoroughly entertaining movie too, but nearly all Hawks with very little of Papa Hemingway to be found in it. If you want to see a really superb adaptation, then the film you have to see is The Breaking Point, made 5 years later by my favourite studio director of the Golden Age, the great Michael Curtiz. While he still had his biggest commercial success ahead of him, White Christmas from 1954, The Breaking Point (shot in 1949, released in 1950) was his last truly great film and finds Curtiz truly at the peak of his powers.

The story is updated to the (then) present day and relocated to Southern California. John Garfield is perfect as Morgan, who is deeply in love with his wife but through bad luck is finding it impossible to provide for his family. Patricia Neal is the smouldering siren who gets a yen for Morgan while it is Juano Hernandez who holds the film together as Wesley, Morgan’s best friend and business partner. He exudes an extraordinary warmth and sympathy, building on a similar role he had just played in Curtiz’ previous film, Young Man with a Horn (1949), another sadly underrated gem. The narrative development is much closer to Hemingway’s original (chunks of which had already been used anyway for the climax to John Huston’s Key Largo (1948)), concluding with a memorable and moving finale (admittedly softened in some respects from the book, though with some sexual symbolism added) and a heartbreaking yet subtle final shot in which Wesley’s young son is left all alone on the pier. Beautifully photographed by Ted McCord and impeccably directed by Curtiz and played to perfection by its cast, this is just one of the best films about the immediate postwar era in America and is a true classic. 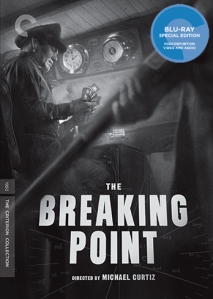 DVD Availability: Available on a decent DVD from Warners in the US and in Spain, this has now been released by Criterion on Blu-ray as well as DVD, from a new 2k restoration. Though currently only available in the US (and Region A locked), this is the edition to get if you can. The film itself has never looked better, and the extras devoted to the film and the work of its director are well worth the investment.