THE LIVING AND THE DEAD (1954) by Boileau-Narcejac

Posted on 2 August 2013 by Cavershamragu

Pierre Boileau and Thomas Narjejac’s mysteries in the 1950s and 60s were admired for their great plot ingenuity but not for their plausibility. This is certainly the case with their third novel, a morbid tale with a giant twist adapted with reasonably fidelity by Hitchcock as Vertigo (it has  been reprinted several times since under that title).

I submit this review for Bev’s 2013 Vintage Mystery Challenge in the ‘Killed in Translation’ category; the 2013 Book to Movie Challenge at the Doing Dewey blog (for links to other participants’ reviews, click here); and Patti Abbott’s Friday’s Forgotten Books meme, which today Todd Mason is graciously hosting over at his fab Sweet Freedom blog.

“Madeleine walked in front of him, a slim dark figure, a prey to the shadows, smelling of chrysanthemums”

Originally published in France in 1954 as D’entre les morts (literally ‘Among the Dead’), it appeared in English two years later as The Living and the Dead in a translation by Geoffrey Sainsbury, who had also been responsible for many of the early UK editions of the Maigret novels (he was an early champion of Simenon) though, controversially, he also made several changes to the original texts. The issue of ‘version control’ is not one I can discuss here not having access to the French original but it is fascinating to compare the book to the Hitchcock film adaptation, a very different kind of ‘translation’. It is said that Hitchcock was so envious of the success of Les diaboliques (1955), the film version of the team’s previous novel that he acquired the rights to the team’s next book, not realising that they had in fact fashioned a story in the hope that it would attract his attention. Is this true? Narcejac later disputed this but it’s a great story anyhow.

I have blogged about the celebrated film adaptation in some detail before (Is Vertigo the best film ever?) but this is a good opportunity to compare it to its literary progenitor. Here is a plot description for both book and film:

An ex-policeman, invalided out of the Force due to a fear of heights, is contacted by an old college friend who is now a wealthy industrialist to follow his wife, Madeleine. She has become obsessed with the life, and death, of her great-grandmother,who ultimately committed suicide. Her husband is concerned she might do the same. The detective follows Madeleine as she visits the grave of her ancestor and even the house where she once lived. One day Madeleine goes to the waterfront and throws herself in. The ex-detective saves her and the two become confidantes. 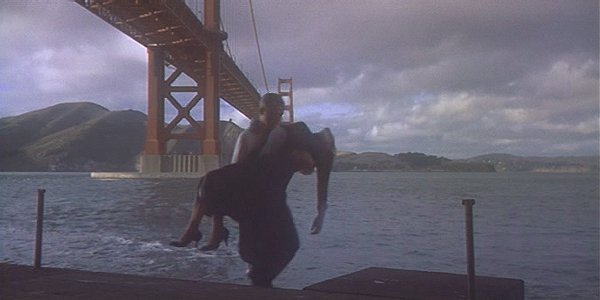 She tells him that she has dreams of an old church with a tower and he tells her it is a real place. They go there and she rushes to the top – he can’t reach her due to his agoraphobia and so is unable to stop his friend’s wife plunging to her death. The detective is traumatised and much time passes until by chance he meets a woman who looks just like her. He becomes obsessed with turning her into Madeleine though she is clearly not his old friend’s wife. This ultimately leads to another death.

The British director was famous for his near disdain for the books and plays he adapted, taking only what interested him and discarding the rest. In the case of Vertigo he must have liked what he read as he kept a great deal, from most of the plot and its two-act structure to Madeleine’s gray dress, necklace and hair style. On the other hand, there are great differences too. For one thing, the first part of the book is set in the Spring of 1940 during the ‘Phoney War’. The protagonist, named Paul Gevigne, is from the outset a highly neurotic type, deeply envious of Roger Flavieres, the old college chum who is now Madeleine’s husband, and clearly sexually dysfunctional. Thus his attachment to Madeleine is, from the outset, more than tinged with unhealthy desire and self-loathing.

“So it comes to this,” said the psychiatrist, “you’re still looking for her. You refuse to believe she’s dead”

Part one of the book ends with the death of Madeleine and the fall of France to the Nazi invaders. The story picks up again at the end of the War. Roger is now dead and Paul is an alcoholic in lousy physical and mental shape, tormented by his guilt over the death of the woman married to his old friend who he secretly coveted. Though still able to tun his legal practice, he is told by his doctors that he must get out of the city and start seeing a shrink too. On the day he is to leave Paris he goes to the cinema and watches a newsreel – and sees a girl who reminds him of Madeleine. He tracks her down to a swanky hotel, where the woman (named Renee Sourange) has just been dumped by her rich boyfriend. Paul becomes her new lover and is initially pleased that his able to dispel the idealised memory of the dead woman. But soon their relationship deteriorates as he becomes consumed by the idea that she is also a reincarnation of Madeleine’s great-grandmother – this is very different from the movie and in fact this part of the book actually more closely resembles the torment and doom of the closing of Fleming’s Casino Royale (1953) as the couple are ultimately trapped in a self-destructive relationship. And then comes the big shocking twist which is undeniably clever and in fact seems slightly more plausible here than the version we see in the film even though the story by this point is much more deranged than the one in Vertigo. It is bleaker and more nihilistic and certainly much less operatic (I found it impossible not to hear the strains of Bernard Herrmann’s magnificent Wagner-inspired score as I read the book).

In adapting it for the screen the filmmakers created a new character, Midge (Barbara Bel Geddes), who secretly loves the investigator. This helped provide an identification figure for many in the audience as she is a down-to-earth type compared with the main protagonists at the centre of the psychodrama being enacted. The book does suffer from not really having an equivalent person to root for and for making most of the characters pretty unsympathetic, reflecting a tougher, less sentimental streak. I prefer the film, but it’s an interesting book, as much for its departures as for what it shares with the better known incarnation.