A psychopath is stalking the women of a small district in Paris and Jules Maigret of the Police Judiciaire is under pressure to find the culprit. Pretty soon, after a failed attack, an arrest is made – but then another murder is committed. Is it possible that Maigret got the wrong man? And who is truly responsible for the crimes anyway?

I submit this review for Bev’s 2013 Vintage Mystery Challenge in the ‘World Traveler’ category; the 2013 Book to Movie Challenge at the Doing Dewey blog (for links to other participants’ reviews, click here); and Patti Abbott’s Friday’s Forgotten Books meme over at her fab Pattinase blog – you should head to these great sites now.

“Doesn’t your responsibility frighten you a bit?”
Maigret understood at once.
“I suppose you’re referring to the murders in the 18th arrondissement?”

Originally published in 1955 in France as ‘Maigret tend un piège’, the English translation by Daphne Woodward first appeared 10 years later and seems to have been the one used through all subsequent editions. This doesn’t hurt the book particularly I’m glad to say, due in part to the fact that she largely resists the temptation to be too idiomatic (and indeed goes the other way by retaining the ‘madame’ and ‘monsieur’ soubriquet, as was the convention with books and movies at the time), making it seem less dated. This is none the less a novel of its time, when it was possible to track down all Parisian button sellers virtually in a day and all vagrants were seemingly known personally by the police. Yet it is clear that they do not know everything:

“He was a man unlike others, a man who killed without any of the reasons other people can understand, in an almost childish way, afterward tearing his victim’s clothing as though by whim.”

The novel begins ‘in media res’ during a hot and humid August with five women dead and Maigret ready to spring a huge and elaborate trap. We then flash back to understand just what the detective is up to. This helps build up suspense but also keeps the emphasis firmly on Maigret’s sense of urgency and responsibility in his efforts to stop the killings. In fact he finds himself somewhat at odds because his usual ‘methods’ (even though he claims not to have them) are failing him – he just can’t get a handle on what kid of person the murderer might be. Instead we are taken into the realm of abnormal psychology and Maigret finds himself an ally in the shape of a Professor. While Simenon often gives the impression of never having met a clause he didn’t like, delivering a great many such prolonged paragraph-length sentences like the one here above, this does keep the story very proximate to Maigret, even though the book is in the third person. Ultimately a small, seemingly insignificant physical clue is found – a button – leading to a man Maigret believes to be the killer – and it is here that the book becomes truly fascinating. As often with Simenon it is the strained relationships between men and women that are caught best and here we get two, as the man is caught in a battle of wills between his wife and his mother. But then there is a clever twist when all the detective’s theories are thrown in the air when another woman is killed while the suspect was in custody. Have Maigret’s faculties really deserted him in the face of a truly inhuman killer?

“Maigret had made a mistake. Would another man, in his situation, have avoided it? That was a question he was often to ask himself afterward, and of course he never found a satisfactory answer to it.”

One of the delights of this book is how modern it feels – it seems extraordinary in fact to be reading a serial killer book nearly sixty years after its original publication that conforms so closely to the recognised template still employed to tell such stories today, though this does tend to suggest that really they all emerge from the long shadow of the Jack the Ripper case too of course. None the less, the development of the almost intimate relationship between the killer and investigator, the sense of panic that invades the small area in Montmartre, the eventual emergence of a hidden pattern, the last-minute twist and the eventual showdown, are elements we will recognise and greatly enjoy.

Anyone interested in finding out more about Simenon and his novels should seriously consider checking out Steve Trussel’s massive Maigret web resource at: www.trussel.com/f_maig.htm

Like virtually all of the Maigret stories, the novel has been filmed several times for television and the cinema. Michael Gambon was Maigret in a version for British television in the 90s and that adaptation of this novel – rather too sedate, like the show as a whole if truth be told – can be viewed on YouTube in four segments: here, here, here and here. The first adaptation, starring Jean Gabin (he would play the role in two further films), remains far and away the best of them to my thinking however. Released in English-speaking territories simply as Inspector Maigret, this movie was shot almost entirely in the studio and on the backlot and benefits enormously from this, delivering a tightly controlled experience. It is directed with a firm grip by Jean Dellanoy, one of the many able craftsmen found in French commercial cinema in the postwar era who brought polish if not always much sheen to a wide range of subjects. This is one of his best films from the era and its success led him to make a sequel the following year, Maigret and the St. Fiacre Case, again featuring Gabin. 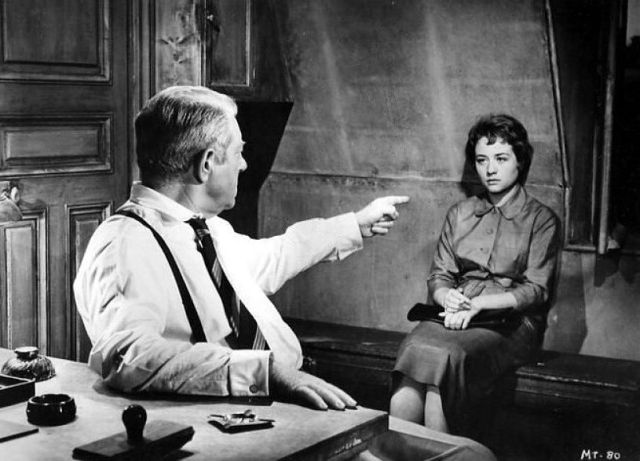 The film expands quite considerably on the novel, making it even more apparent just how ‘interior’ the Simenon book is – plot points that are barely mentioned, like the butcher shop near the scenes of the crime, here becomes a focal point of the action and explains the ‘miracle’ disappearances of the killer even during a police dragnet. We also get a lot more detail about the police activities and of the interaction between Maigret and his men (including a great cameo with Lino Ventura who gets the worst of a judo-trained police woman). It also provides a better role for Annie Girardot as the wife of the man accused of the murder, her role expanded as befits a great actress. The film is pretty atmospheric, shot mostly at night with able use of low-key lighting to keep viewer interest alive as Simenon’s plot unfolds. Where the book has virtually no action, here we get a strong sense of urgency through detailed camera moves, beginning with the gloved killer prowling the streets and then taunting the police with phone calls (another detail not in the book). The movie also spices things up again with an invented interlude with an informant that includes a brief flash of nudity, fascinating for such an early film (and indeed it was originally censored overseas though has now been restored). Just as good as the book in its own way, it dramatises the story with great expertise and creates a cinematic equivalent for Simenon’s very literary story – the two can be enjoyed quite separately as superb if truly complimentary versions of the same story.

The entire film, looking great in its restored edition, was until recently available, with English subtitles, on YouTube, but currently seems to have vanished – here is the trailer:

44 Responses to MAIGRET SETS A TRAP (1955) by Georges Simenon