The Forbidden Photos of a Lady Above Suspicion (1970)

Posted on 20 October 2015 by Cavershamragu 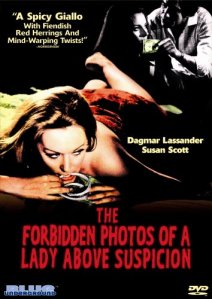 Dagmar Lassander is a bored housewife who has been relying too much on drink to keep herself together. Her husband knows he has been neglecting her but his business (underwater diving equipment) is at a critical stage. One night she is stalked by a man who said her husband killed one of his creditors. To save him, she allows herself to become the object of desire for a blackmailer with a penchant for irregular sexual practices. Then her friend finds a photo of the man …

The following review is offered as part of the Tuesday’s Overlooked Film meme hosted by Todd Mason over at his unmissablke Sweet Freedom blog.

“Everyone has his price – even a sex maniac!”

Despite a title designed to titillate audiences with promises of sex and violence, this Giallo turns out to be a pretty tame (very little actual nudity and almost no blood either). In fact, it is really a pretty traditional mystery movie, one that more than anything reminded me of that run of suspense films made by Hammer Studios from scripts by Jimmy Sangster in the 1960s, in which a seemingly straightforward suspense situation usually disguised a complex murder plot (I have reviewed all of these and you can find them listed at the bottom of the review found right here). And in fact it turns out that screenwriter had written several years earlier in that post Les Diaboliques style in which, until the end, we really have no idea just who to trust and who is trying to get the upper hand while hiding behind the scenes.

Although less well-known than some of its contemporaries made by the likes of Argento, Bava and Martino, this is none the less what many might consider to be almost a trademark Giallo – that is to say an Italian-made mystery from the 1970s with a powerful visual approach partly indebted to the expressionistic style associated with pre-war German cinema. A synthesis of the German Krimi and the British traditional whodunit, these films took off in Italy with their flamboyant visuals and complex mystery plots that felt more like horror films even if the stories ultimately turned out to be entirely free of fantastical elements.

Originally released in Italy as ‘Le Foto Proibite di una Signora Per Bene’ it stars dreamy Dagmar Lassander as Minou, a woman who has a lot of problems but is trying to overcome them (including a dependence on drink and tranquilizers). Trouble is, she is very bored at home – perhaps not surprising as she doesn’t need to work but doesn’t do much with all her spare time either. She and her husband have no children or immediate family and he is away a lot. As a result perhaps she feels slightly envious of the naughty behaviour of her glamorous friend Dominique (played by Susan Scott, who went on to marry the film’s director and co-producer Luciano Ercoli, and who certainly makes the most of her role as a carefree vixen).

Dominique seems to be free of any hangups, leads a seemingly carefree existence with an uncomplicated sex life to match. Indeed, she is so thoroughly uninhibited that is happy to have nude photos of herself on display – in fact in one delirious scenes she puts on a slide show for herself and Minou (did everybody do this at the tail end of the swinging 60s one wonder?). But Minou is much more uptight in such matters – or is until her husband gets seemingly involved in the murder of a creditor, Minou tries to protect him from a blackmailer and agrees to become his lover – but is he really who he says he is? And why does Dominique have a photo of him in her collection of erotic photographs – is she trustworthy or is Minou losing touch with reality?

The Forbidden Photos of a Lady Above Suspicion is a languid, good-looking and moderately entertaining mystery that over 96 minutes switches from thriller to psychological suspense to whodunit, all beautifully shot and decked out with some utterly bonkers fashions – and did I mention the score is by Ennio Morricone? (You can large chunks of it online p0 for instance, see this). It tries to sell itself as a slightly over-the-top mixture of sex and thrills (see the trailer here), but actually its a pretty respectable murder mystery, only half-heartedly decked out in s&m trapping to try and get the punters through the cinema gate.

DVD Availability: Released quite a few years ago by Blue Underground in the US with a really superb transfer (all frame grabs are taken from that DVD and are strictly for non-commercial purposes of criticism and review). It also includes a brief but amusing interview with Ernesto Gastaldi, who in the 60s and 70s must have been the most prolific screenwriter in Italy (just look at his huge list of credits at IMDb). The opening minutes of the film are available currently to view online here.