And Fedora is back (for now …) and so is Ed McBain’s 87th Precinct series (for my previous reviews click here). I am reading them chronologically, an approach that pays dividends in the case of Fuzz. Not only does it see the return of the squad’s arch nemesis ‘The Deaf Man’, it also plays with the format by subverting reader expectations – plainly put, our heroes get everything wrong!

I offer the following review as part of the 2013 Book to Movie Challenge at the Doing Dewey blog – for links to other participants’ reviews, click here; and Friday’s Forgotten Books meme run by Patti Abbott of Pattinase blog, though today the links are hosted by Todd Mason at Sweet Freedom

“Oh boy, what a week. Fourteen muggings, three rapes, a knifing on Culver Avenue, thirty-six assorted burglaries, and the squadroom was being painted” 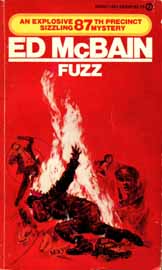 After an unprecedented two-year break, Evan Hunter returned to the 87th Precinct series to deliver one of its most unusual yet also most popular entries. Indeed when first published, this blackly comic tale of murder and mayhem got great reviews and proved to be one of the most commercially successful in the series thus far. The film rights were sold almost right away, with Hunter reportedly netting well over $100,000 from the movie sale (he would ultimately also provide the screenplay, though more about that later). So why was this one so popular? Well, in part of course it may have been because the team from the 87th had been away for two years, but it is also one of the most agreeable and lighthearted of entries, despite a plot that sees senior city officials being held to ransom and several murders taking place. Allen J Hubin in his 1968 review for the New York Times said, “I don’t know when I’ve enjoyed the 87th Precinct as much”, which is just about right because this is a departure where McBain turns the series into a complete farce – indeed, this is a book where our established heroes spend most of their time screwing things up over and over again!

“There is nothing I hate more than a mystery,” Meyer said.

While the chronology of the series got increasingly hazy as the years wore on, with the main cast of characters hardly aging at all, the McBain mysteries tried to remain as up-to-date as possible in terms of police procedure and forensic technology. In the case of Fuzz we get several long rants about the impact of the recent Miranda (1966) and Escobedo (1964) decisions that radically altered the way the police could interrogate suspects by legally enshrining the right to remain silent and the right to an attorney during an interrogation. But the cops don’t appreciate this because it makes their jobs much tougher – but then, this is very much a book about the impediments that will thwart virtually all attempts at crimebusting by the boys and girls of the 87th – just nothing seems to go right. For starters the office is being redecorated during a particularly freezing

March, so all the windows are open despite the cold. Desks are covered in sheets, making it hard to get any work done but then bits and pieces of their equipment start getting pinched, never to be seen again (I had my eye on the decorators). Then Steve Carella goes undercover as a wino to stop a couple of slimeballs who are dousing sleeping vagrants in fuel and setting them alight – and what happens? He winds up in hospital with second degree burns! And when he recovers he goes back out again, when he hears the two villainous vigilantes coming, his gun gets caught in his shirt and he ends up back in the hospital having got the living hell beaten out of him.

“”Have a drink” one of the boys shouted, and Carella saw a match flare into life, and suddenly he was in flames”

But it doesn’t stop there – because this book sees the return of the criminal mastermind with the hearing aid (which he may not actually need) ‘The Deaf Man’ – and he wants to make the 87th look like chumps. Introduced in The Heckler (which I previously reviewed here), after a gap of eight years he returns and is clearly still upset that his previous extortion plan was foiled by Carella and co. This time he threatens to kill a public official unless $5,000 dollars is paid. He sends the note to the 87th but the money isn’t paid at the drop-off ) an innocent party was sent to collect it, leading the police exactly nowhere) – and the official is duly shot and killed. The ‘Deaf Man’ then

ups the ante and threatens to kill the deputy mayor unless $50,000 is paid. This leads to an extended stakeout in the park that sees Meyer and Kling in disguise as nuns (!) while Hal Wills literally gets in the sack (well, a sleeping bag to be exact) with luscious policewoman Eileen Burke. When a man (another one of the Deaf Man’s innocent patsies) comes to collect the money (actually just blank paper) in a lunch box on a park bench, the 87th roars into action – well, sort of. Willis and Burke’s sleeping bag zipper gets stuck and rookie patrolman Genero ends up shooting himself in the leg! Looks like the Deaf Man just might get away with it this time.

“Why is it I always get involved with vaudeville acts?” Meyer asked.
“Huh?” the first painter said.
“He’s being wise,” the second painter said.

Here the ‘Deaf Man’ uses the pseudonym ‘Mort Orecchio’ (a French and Italian commingling that roughly translates as ‘dead ear’) and as always seems to be at least two steps ahead of the police, though the tone couldn’t be more different from his earlier appearance as this really is a farce with the team’s antics frequently compared to those of the Keystone cops. Ultimately the case is solved, but only through sheer coincidence and dumb luck (with the emphasis on the former). It isn’t all fun and games though – there’s a great scene in which Carella visits Genero in the hospital, the latter not really understanding why he will never get promoted to detective; while the Deaf Man’s vicious disregard for human frailty in explored in a nasty sequence when he makes a drug addict debase herself to get her next fix. This is a supremely well-written entry in the series, one that handles both comedy and drama with superb skill.

The book rights were snapped up almost immediately following its serialisation in the Saturday Evening Post but there were many delays in production – Brian De Palma was originally hired but there were problems with the unions in New York so eventually the director moved on to another project; a new script was written and the location eventually shifted to Boston for the exteriors and LA for the interiors. Burt Reynolds, despite his then new moustache (which was not yet a trademark), is physically excellent casting as Carella even though his laid back good old boy persona is quite different from the character in the book. His presence however was an unexpected boon to the commercial prospects of the movie as it had the good fortune to appear just as Reynold’s career as a star was really taking off. It coincided in fact with the release of Deliverance (1972) and the publication of his notorious Playgirl centerfold, which was actually incorporated into the movie poster artwork (you can see it in the tie-in cover at the top of this review). Yul Brynner also makes for an excellent ‘Deaf Man’ as you need a real star to make an impression in such a small but crucial role, one that appears mostly in isolation from the rest of the characters and tends to be remote and unemotional.

“What do you mean we’re inept?” – Bert Kling (Tom Skerritt)

Hunter ultimately wrote the script himself and is very faithful to the story, amplifying the humour and the importance of the role played by series’ female detective Eileen Burke – who for some reason here becomes ‘Eileen McHenry’ – which was expanded from just one scene in the book so as to provide an adequate part for Raquel Welch. Jack Weston makes for an excellent Meyer though Tom Skerritt is perhaps a little uneasy as Kling. On the other hand Dan Frazer is perfect as the lieutenant – he would go on to play the exact same role for years on TV in Kojak (1973-78), which began airing shortly afterwards. Intriguingly, while Hunter sticks to the book pretty much all the way through, he did alter the ending somewhat, mainly by adding the finale from the previous appearance of ‘The Deaf man’ in The Heckler, which makes sense as it suggested the possible return of the Squad’s nemesis (and jokingly resembles the ending of Deliverance actually). Sadly though there would be no sequel to this film, though it did well enough at the box office of the day. Good fun and well worth finding if you’re in the mood for a salty-but-fun police comedy thriller.