Posted on 22 August 2011 by Cavershamragu

The British writer-producer-director Jimmy Sangster (James Henry Kinmel Sangster) has died aged 83. Long associated with the films made at Hammer Studios, where he first had a long career as an assistant director before moving on to writing, he is probably best known for his scripts for their many horror films such as The Curse of Frankenstein (1957) and Dracula (1957). However I am choosing to highlight his career here because he was in fact much more interested in the mystery and thriller genre and most of his output can be described as suspense stories focusing on twists and turns rather than tales of horror or the supernatural.

An unpretentious craftsman, he was not averse to recycling basic story ideas over and over when they proved successful. Amongst his best works one should in particular remember Taste of Fear (US title Scream of Fear), a really ingenious and suspenseful reworking of the classic chiller Les Diaboliques (1954) which benefits greatly from direction by Seth Holt and luminous black and white cinematography by Douglas Slocombe. This film would serve as the template for many of Sangster’s later dramas, which also showed the influence 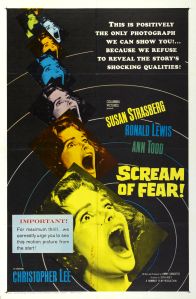 of Hitchcock’s 1960 film of Psycho, from the Robert Bloch novel, all of which deal with abnormal psychology and/or elaborate murder plots which hinge on discrediting the victim by making it appear that they are going mad. These make up the vast bulk of Sangster’s movie output. An early Hammer entry was The Snorkel (1958), a story of an ingenious murder involving the titular piece of apparatus as the killer hides under the floorboards to avoid detection. Intent to Kill (1958) was a political thriller directed by Jack Cardiff and was adapted from the (pseudonymous) novel by Brian Moore. Jack the Ripper (1959) was a Gothic chiller not made for Hammer but for the rival Tempean outfit.

After the success of Taste of Fear at Hammer, the company asked Sangster to write and produce several suspense stories made in that mould. The most notable of these include a loose adaptation of Josephine Tey’s ‘Bret Farrar’, retitled Paranoiac (1963) and starring Oliver Reed in an excellent early starring role. Despite its unusual setting in France, Maniac (1963) is otherwise a fairly undistinguished thriller and is much less interesting than Nightmare (1964), another reworking of the Diabloque formula, which would then be seen again in more diluted form in Hysteria (1965), made for MGM.

Back at Hammer Sangster reunited with Holt to make the chilling The Nanny (1965) from the novel by Evelyn Piper with Bette Davis in fine, restrained form in the title role. Rather less successful was Deadlier Than The Male (1967), a fairly limp attempt to update Bulldog Drummond for the swinging Sixties spy boom with Richard Johnson as the hero.

Crescendo (1970) was another tale of suspense while A Taste of Evil (1971) was a TV-movie made for Aaron Spelling and an uncredited remake of Taste of Fear with Sangster cheekily reusing his old script without telling the producer. He would return to that story again for his final Hammer thriller, Fear in the Night (1972) starring Joan Collins and which he also directed. It is generally held to be the best of his three outing behind the camera. Despite the presence of John Huston in the director’s chair, Phobia (1980) was another whodunit inspired by Psycho this time set amongst a psychiatrist (played by Paul Michael Glaser) and his patients.

Sangster also amassed many TV credits, the most notable in the crime genre including his work on such popular detective shows as McCloud, Banacek, Ironside and Cannon.

With the main exception of Hysteria, stuck at the moment in MGM’s vaults though there have been screenings on TCM, all of the above films are available on DVD and Paranoiac is even available in a stunningly sharp blu-ray edition.

Kim Newman has written a fine obit of Sangster for The Guardian while there is a 2008 tribute to the man to be found over at CinemaRetro: www.cinemaretro.com

IMDb lists his credits here while Sangster’s Wikipedia page can be found at: http://en.wikipedia.org/wiki/Jimmy_Sangster

This entry was posted in Hammer Studios, Jimmy Sangster, RIP. Bookmark the permalink.