Posted on 29 November 2011 by Cavershamragu 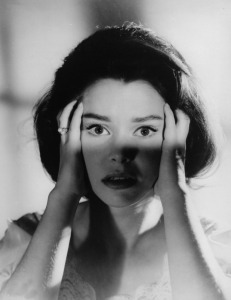 This film, released more prosaically in the US as Scream of Fear, is a psychological suspense yarn plainly inspired by Les Diaboliques (Henri-Georges Clouzot, 1955) but offering several neat twists and turns of its own. A superior Hammer movie – from its well-crafted script to its inventive direction and fabulous monochrome cinematography from the great Douglas Slocombe, it features a stand out performance from young star Susan Strasberg as well as great support from Ann Todd and Hammer Studios stalwart Christopher Lee.

“I made around 35 movies, but Taste of Fear has always been my favourite” – Jimmy Sangster

This was the first of a distinctive crop of mysteries that Jimmy Sangster wrote for Hammer Studios in the wake of the success of Alfred Hitchcock’s Psycho (1960) and, to a lesser extent, his own 1958 thriller The Snorkel. Right from the outset though, with its setting in France and references to submerged bodies and the central image of a dank swimming pool, for most viewers and critics it was clear even then that this film was heavily inspired by Les Diaboliques, the classic 1955 adaptation of a typically tricksy Boileau and Narcejac’s novel. That film incidentally, under its English-language release title ‘The Fiends’, was initially released in the US on a double bill with the Sangster-scripted Hammer monster movie, X The Unknown. But this is a film with several aces nicely concealed up its sleeve and well deserves its reputation as among the very best of the non-horror output of the celebrated British studio. 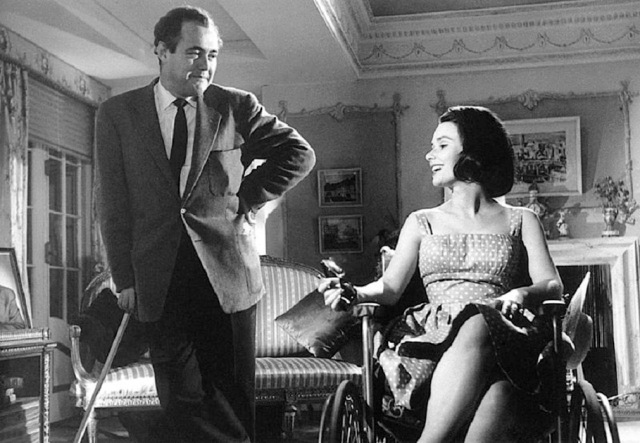 Jimmy Sangster and Susan Strasberg on the set of ‘Taste of Fear’ in 1960.

We begin in Switzerland with a title sequence depicting the recovery of the drowned body of a young girl, then cut to the South of France where the rest of the story will take place (and where the film was partially shot). Susan Strasberg is every inch the film’s star as she makes a grand entrance, arriving at the airport in a wheelchair, sporting pearls and sun glasses. Penny Appleby has been invited home after spending nearly ten years away in Switzerland following a riding accident that left her paralysed. She has never met Jane, her father’s new wife (played with class by Ann Todd), nor the family chauffeur Robert (square-jawed and dependable-looking Ronald Lewis), but they quickly make their best to make the girl feel at home, especially as Mr Appleby seems to have made a sudden decision to leave on business for a few days. Strasberg plays Penny as a level-headed, intelligent young woman who refuses to be defined by her disability – and although she is placed in jeopardy throughout, she always looks thoroughly glamorous. Strasberg was rarely lit as well and as carefully as she is in this film, looking ravishing throughout.

She tells Jane that she was very attached to her nurse, who recently drowned back in Switzerland and so was very glad to receive the invitation from her father to finally come home. She is clearly still grieving and the swimming pool at the centre of the Appleby home seems to hold a strange fascination for her. That night she sees a light emanating from one of the rooms on the other side of the pool – going in, she is shocked to see her father sitting on a chair with a candle at his feet – his eyes are wide open and he is clearly dead. She flees in horror and in her agitation falls into the pool. She is rescued by Robert and revived by the local doctor, played by Christopher Lee with just the right mixture of concern and ambivalence.When they go back to the room, there is no one there. The Doctor believes that it was all a hallucination, but Robert later finds evidence to the contrary in the form of wax found on the floor of the room.

Lee would later claim that this was in fact one the best of his roles at Hammer, the same company that cast his as Dracula, Frankenstein’s monster and the Mummy! He does give a great performance in fact in an equivocal role, especially in a dinner scene after Penny confesses to Robert that she suspects the doctor of having an affair with her step-mother. The doctor patronises the young girl about her condition, suggesting that even her paralysis may only be in her mind and she fires back and (verbally) shoots him down. She is no mere damsel in distress waiting to be rescued – her wheelchair makes her vulnerable of course but she is also resourceful and intelligent, refusing to kowtow to anyone. She and Robert start to investigate, believing that the stepmother has killed her husband and is attempting to drive Penny insane to get control of the Appleby estate. But all the characters have secrets in this film and as the story progresses and the murders pile up there are several clever reversals in the story before its conclusion.

This is one of the best of the Hammer films of the 60s, but is also a highly atypical one. The script, originally titled ‘See No Evil’ and then for a time known as ‘Hell Hath No Fury’, wasn’t developed in-house but was an original, written on spec by Sangster and he first offered it to Rank. After it went through the hands of two producers there, he bought it back and offered it to Tempean, a smaller company he had already worked with, as a way to also get his first credit as a producer. As they were unwilling to let him do this, he finally took it to his old friends at Hammer, who were prepared to take a chance on him. Also new to the studio were director Seth Holt and cinematographer Douglas Slocombe (later to shoot the Indiana Jones trilogy for Steven Spielberg as well as the original version of The Italian Job), who were in fact mainly associated with Ealing Studios, which had recently closed its doors. In addition, due to the need to use a tank to create the swimming pool, which is the focus of two very eerie sequences, the decision was made not to shoot at the company’s regular Bray Studios but at nearby Elstree instead, which was much bigger and better-equipped for this. The result is a plusher looking film than the studio’s standard fare, tightly controlled by its director – benefiting enormously from his skill as a former film editor – and Slocombe’s expert use of wide-angle lenses to create tension, not least for his masterful use of black and white at a time when Hammer were best known for the lurid use of colour.

Although a bigger hit on the Continent than in the UK, the film was a big money spinner for Hammer so they quickly asked Sangster to make many more. Over the next couple of years there would nearly a dozen suspense thrillers, usually with one-word titles – such as Nightmare (1963) and Hysteria (1964) – which would suggest an air of the supernatural with a modern-day (well, 1960s anyway) Gothic atmosphere but which would all eventually all be explained rationally in the end. I plan to review all of these soon as they are readily available on DVD (either in the US or the UK) usually in excellent editions.

DVD Availability: As a standalone release in Europe (Region 2) or as part of the Sony DVD Hammer Films: Icons of Horror