Posted on 22 September 2015 by Cavershamragu

After a two-year gap Ed McBain returned to the cops of the Eight Seven with their longest case yet. Clocking in at over 300 pages, we are presented with four intersecting murder cases, all taking place during a particularly glacial February. It also sees the welcome return of Eileen Burke, one of the few recurring female cops in the series. The book was also turned into a really good TV-Movie as part of the short-lived series, Ed McBain 87th Precinct (1995-97). We begin with the death of a showgirl …

“What’d you get for Valentine’s Day?”
“A murder,” Carella said.

A drug dealer named Paco is killed in one part of the city and then a few days later a dancer in a popular Broadway show is shot with the same gun – are the two cases related? While Carella and Meyer try to connect the dots, Eileen Burke returns after much too long to help out in a case involving a series of holdups in laundromats in which along with money the criminal also demands the underwear of his female victims as a prize. It’s great to have her back (the 87th really is too much of a boy’s club at times) and there is a nice in-joke when she comments, seeing that Hal Willis is happily surprised to see her, if he was expecting Raquel Welch instead (the actress played Burke in the 1972 movie version of Fuzz). Looking to the past, there is also a nice nod to The Con Man (first published in 1957) when Teddy decides to update her tattoo as a Valentine’s Day present for Steve and re-visits the parlour run by Charlie Chen.

“Crazies make police work difficult. When you’ve got a crazy on your hands, you might as well throw away the manual and work the case by the seat of your pants, because that’s the way the crazy is working his case.”

Kling and Brown are investigating the murder of a gem dealer that eventually ties up with the other two murders as all three were shot with the same gun. Then the girlfriend of the drug dealer is horribly mutilated and dies. What could possible link all these deaths and how could drugs, jewels and theatre ticket scalping all be involved? On the whole, despite its excessive length and an unwelcome emphasis on seamier elements (McBain did seem determined to pack a fair amount of sex into the books by this stage), this entry still manages to keep its wayward-seeming plot together and also adds some good character material around the Valentine’s Day rituals. On the whole this stands up well as a representative of the later style of the series (I am making my way chronologically though the entire 87th Precinct series – to see my previous reviews, click here). 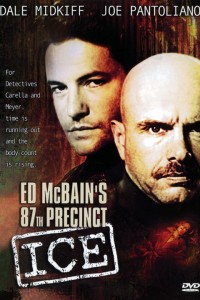 In 1996 the novel became the second (and best) of a trio of feature-length TV films in the Ed McBain 87th Precinct series. It should have launched a regular TV show but never seemed to catch fire, which is a shame as the casting was pretty good and the production values absolutely first-rate. Indeed not only is this a reasonably faithful adaptation, thanks to the smart script by ultra experienced writer Larry Cohen, but is also very stylish thanks to the panache of Bradford May, one of most successful and busiest of TV directors and also a very experienced cinematographer and who here gives the whole production a highly polished look. For instance, when first introducing the 87th precinct and most of the cast, May shoots this in a constantly moving single take lasting nearly three minutes (a technique now rather dully referred to in the US as a ‘oner’), which requires tremendous skill and effort and which is used really rarely (well, unless you’re De Palma or Zemeckis) and practically never on TV given the time constraints they operate under (an extended sequence for the first season of True Detective was a notable, much remarked-upon exception).

“So [deleted] turned snow into ice!”

There are several changes from the book: some purely cosmetic (Hal Willis and Danny Gimp are jettisoned while Cotton Hawes and Andy Parker are added); others to make the story more immediate and concise (the various characters are brought together sooner, the killer revealed halfway and Teddy and Steve have now only been seeing each other for a year) or to add more action. The 87th Precinct books never have much in the way of chases, which is a bit of a problem on TV, so the movie adds a stalker, leading to a rooftop pursuit, and a climax re-written so as to include Teddy getting chased by the scary Emma Forbes and a final confrontation in the theatre at night, which is admittedly much more atmospheric than the book (though it does make the cops behave somewhat stupidly by setting up the killer to go there but arriving late). Not unreasonably, the film cuts out what is a very iffy section in which McBain had Burke admit to having rape fantasies and also cuts out a lot of the padding, such as the extended scenes in which witnesses are very obstructive, leading to little but an extended page-count. The cast is generally very good, with Dale Midkiff (Carella) and Joe Pantoliano (Meyer) proving especially well suited physically to their roles.

This review was submitted as part of Bev’s 2015 Silver Age Vintage Mystery Challenge bingo in the ‘medical’ category as the main suspect is studying to be a doctor and their saving a life proves crucial to the plot: