Posted on 1 September 2015 by Cavershamragu

Having rather hated one of the later cases featuring Roderick Alleyn, the upper-class cop invented by Ngaio Marsh (click here for my splenetic review of False Scent), I thought I would dial back the clock and see how he fared in his first investigation. It was later adapted by the BBC for radio and TV too, which suggests it has a lot of appeal, right? Well … here’s the premise: at a weekend gathering at Frantock, an English country house, a game of ‘Murder’ goes wrong and Alleyn is called in …

As seems so often the case with Marsh, the characters are quite good fun but once the investigation into the stabbing of writer and ladies’ man Charles Rankin begins, it all starts to get very dull and mechanical indeed. Throw in an exotic dagger, plenty of suspects, a completely implausible alibi and an absurd murder method (involving sliding down the bannister of the country house in pitch darkness) and what you have is a fairly typical product of its day (as is the xenophobic Commie bashing, though that has hardly abated of late). In and of itself this can be fun, if you are not in too exacting a frame of mind. On the other hand, it can all be a bit tiresome if, like me, you have read perhaps too many such examples of the genre and get frustrated by the feeling that the author just isn’t trying very hard to vary an already very well-established formula. And the conclusion in particular is rather weak as Alleyn manages to explain how the crime might have been committed but in fact can’t actually prove it – but despite this, he gets an unlikely confession just the same. So really not much cop then – much better instead to concentrate on the adaptations of the book, which made lots of interesting changes!

In reducing the novel to an hour-long drama, this production does a nice job of speeding things up by starting with the discovery of the body next to the dinner gong during the ‘murder’ game and then flashes back to fill in the blanks. Jeremy Clyde as usual is well cast as an aristocrat (he played Alleyn again in a radio production of A Surfeit of Lampreys for the same production team), while the late Donald Sinden is unmistakable as blustery Sir Hubert, the host of the party and art collector who covets the dagger used as the murder weapon. Dorothy Tutin really stands out though as Marjorie, the tragic middle-aged woman who couldn’t stop herself from being in love with a serial womaniser, and becomes an unlikely suspect in his death. The Bolshevik subplot is retained but streamlined considerably. 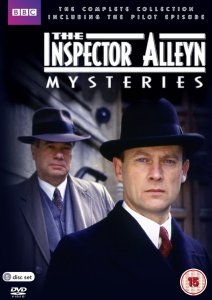 This adaptation kicked off the short-lived Inspector Alleyn TV series (1993-94) starring Patrick Malahide, who took over the role from Simon Williams, who had starred in the original pilot film Artists in Crime (1990). From that initial entry, the series did however retain Belinda Lang as Agatha Troy and William Simons as Inspector Fox. They were added as characters to the adaptation of the book, in which they did not originally appear, (Troy takes over from the Angela North character as Sir Hubert’s niece) to keep the series consistent. Relocating the action to 1948, the Bolshevik subplot is replaced with one relating to the smuggling of art objects stolen during the war, with Alleyn discovering that Sir Hubert is involved in this, putting a strain on his budding romance with Troy. Otherwise, the main characters and plot are fairly faithfully followed (though predictably Nigel’s role from the novel is reduced to make Alleyn and Troy more central, which is fair enough). To be honest I enjoyed this much more than the original novel thanks to its strong cast and lovely locations (a big section of the story now takes place in a church), though it’s a shame composer Ray Russell decided to include several unsubtle homages to Bernard Herrmann’s score for Psycho (presumably for no better reason other than the fact that the first murder, in a change from the novel, is committed by a man in drag). The series is easy to find on DVD (and yes, is plastered all over the internet illegally, too).

The book has been reviewed by many people far more sensible than I and you should seek them out – these include Moira at Clothes in Books; Karyn Reeves at A Penguin a Week; Aarti’s Book Lust; and Natalie Luhrs at Pretty Terrible.