POSTERN OF FATE (1973) by Agatha Christie

Posted on 28 August 2015 by Cavershamragu

This was Agatha Christie’s farewell to Tommy and Tuppence, the fun-loving Jazz Age adventurers currently back on TV in the shape of David Walliams and Jessica Raine. This was their fifth and final volume and sees the couple now in their 70s. It was Christie’s last novel and has a pretty poor reputation – but after Karen of Kaggsy’s Bookish Ramblings trumpeted its values, I have been goaded into giving it another go …

“Young Adventurers Limited – willing to do anything, go anywhere – no unreasonable offer refused”

Summarising this book is both easy and maddeningly difficult. The basic plot is child’s play: Tommy and Tuppence move to an old house in the country and in the process inherit a stack of books, one of which includes the message:

“Mary Jordan did not die naturally. It was one of us, I think I know which one”

This refers to events from before the First World War and an au-pair who died in the house and who some thought was an enemy agent. The spry septuagenarian duo decide to investigate just for the fun of it – then their gardener is murdered and someone fires a gun at Tuppence. It would seem that despite the passage of time, there may still be those trying to keep the events surrounding the decades-old murder a secret …

This plot summary (and there is not a lot more to it actually) in no way conveys the tone and approach of this book, which depending on how you look at it, is either utterly wretched or sad, fascinating and moving all at the same time. Tommy and Tuppence constantly rehash things over and over between themselves and all the people they meet, all of whom are constantly vague about absolutely everything. Very quickly one senses that to some degree it’s not just the characters but that even the author has forgotten what she just wrote and so keeps having to start over, time and time again. There are endless vague conversations about the past that regurgitate the few plot points already established (that Mary Jordan may have been a spy about to expose high-ranking men in British intelligence and was probably poisoned and that a young boy in the household where she was staying found out about it). Thus this becomes, very quickly, a truly exasperating read in any traditional sense, taking the reader to a place of confusion from which it soon becomes apparent there will be no possibility of escape. And let’s try and forget the chapter narrated from the point of view of the couple’s dog … And yet, and yet, in its striving for something it can’t grasp any longer, it is hard not to be just a bit impressed by the attempt.

This book was dictated into a machine and so may have suffered in the transcription process, as Curt Evans of The Passing Tramp pointed out to me recently. It certainly should have been edited much more judiciously. It is undeniable that the book is very repetitive and one senses, with increasing desolation, that the author is fighting a losing battle to keep it together as sentences go on and on without a break, trying to reach a point that disappears in a puff of smoke, as events are forgotten and re-stated in an effort to briefly find them again. Having said that though, it is a book that can also be unexpectedly moving in its depiction of our heroes coming to terms with old age. One senses that Tommy’s worries about Tuppence’s tendency to be a bit scatty hides a deeper concern, one that many of us will find it all too easy to recognise with aged relatives.

By any objective standard, the plotting and narration of Postern of Fate is disastrous –  but it does have a somnambulist fascination to it. It undoubtedly represents a massive falling off from the books that had preceded it only a few years earlier, speaking to Christie’s declining health in her final years. Certainly the contrast with Christie’s late peaks Endless Night (1967), By the Pricking of My Thumbs (1968) and Hallowe’en Party (1969) is very stark indeed. So, to enjoy Postern even a little bit does require treating it as a special case, though I can imagine that many readers, even most, won’t have the patience. I did just about manage to muddle through, so thank you Karen for suggesting I go back to it. As frustrating and sad as the process was, I’m glad I did. 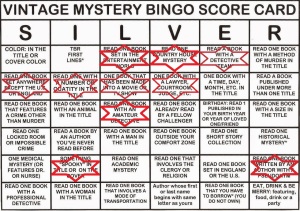 71 Responses to POSTERN OF FATE (1973) by Agatha Christie