Posted on 17 March 2017 by Cavershamragu 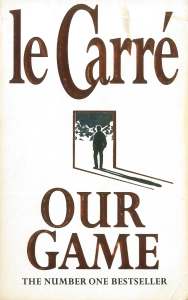 After several globe-trotting excursions, including The Little Drummer Girl (1983), The Russia House (1989) and The Night Manager (1993), John le Carré got back to basics in this very compact spy novel which doesn’t set foot outside UK until the very end. It tells the story of Tim and Larry, two men bound by their past working for British intelligence but who, after being let go, are supposed to be living civil civilian lives in Somerset. But Larry just isn’t the quiet type and when he goes missing, Tim and his girlfriend Emma are dragged back into his old life …

I offer this review for Patti Abbott’s Friday’s Forgotten Books meme at her fab Pattinase blog.

“To kill without being killed is an illusion”

This is a very small-scale novel – our only point of view is that of Tim Cranmer, and our experience of the other two main characters is filtered entirely through him. But just how reliable a narrator is he? There is in fact a terrific twist about 100 pages in that really changes how we fell about the central character dynamic. The use of a strict point of view is very impressive and, when we learn that Tim’s girlfriend Emma has abandoned him for his oldest friend Larry, this starts to feel more like a Philip Roth tale of a man having a mid-life crisis than a spy caper as we experience his sense of loss, rage, jealousy and disappointment.

“Planned apathy is the best description I can think of: act natural and look the other way while the ethnic cleansers do their hoovering and restore what politicians call normality.” 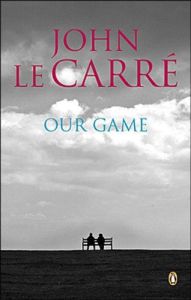 Despite the male menopausal angst, which is brilliantly caught (and frankly gave me chills for its accurate dissection of what can happen when you start to question just where you are once youth is definitely behind you), this is a very typical work of its author. With its background in espionage and its ultra topical plot (involving the struggle of the people of Inigushetia within the new Russian Federation, the book completed just before the first Chechen War exploded), this acts as a very clear distillation of the classic le Carré scenario: we have two spies, one of whom is at odds with his own masters and the other a double agent, and a woman caught in between. This can be seen in most of the author’s books, from such early triumphs as Call for the Dead (1961) and The Spy Who Came in from the Cold (1963) through to Tinker Tailor Soldier Spy (1974) and The Little Drummer Girl (1983) and such later classics as A Perfect Spy (1986) and The Russia House (1989), and it is fascinating to see how in some the double agent, ostensibly therefore a traitor, is so often not the villain of the piece.

“Only by going after Larry could I fill that pit that for so long had done duty for my soul.”

So what kind of book is this exactly? Spy story, adventure novel, topical political rant, male menopause psycho drama, or all of theses combines? In terms of influences, Joseph Conrad gets name checked directly with a reference to Lord Jim, though Heart of Darkness is also a major influence as Tim is ultimately driven to leave everything behind in England and penetrate a foreign and mysterious land to find both Larry, amid a trail of bodies, missing millions and a conflict going back centuries and, or course, himself. Because what becomes clear as we progress is that these two friends / rivals are like two parts of an Aristotelian whole – Tim was the dull, dark encrusted oyster and Larry the shiny bauble inside. In this regard, with its story of two men and the woman between them involved in a political conflict and with one seemingly betraying the other, there is also very strong evidence of the influence of Graham Greene, most especially his 1955 masterwork, The Quiet American. Indeed, this novel really might have been better entitled The Quiet Englishman as the debt is very marked. But this is no criticism – le Carré handles his characters masterfully and his dialogue scenes are just as riveting as his plot. The story does slow down a bit as Tim closes in on Larry, but the ending is entirely satisfying so that this ultra-focused tale of old spies and international chicanery  impresses from start to finish with its vivid scene-setting, end of Empire atmosphere of dusty decay and some very effective change of gears that keeps you glued to the page while the author, while seemingly drifting occasionally, proving that actually he never loses his tight grip on the plot.