Posted on 22 February 2015 by Cavershamragu

Like Somerset Maugham, the hugely popular novelist and short story writer Edgar Wallace was for a time even more successful as a playwright, starting with his 1927 smash, The Ringer, adapted from his novel, The Gaunt Stranger. It was so successful in fact that Wallace reworked the novel to match the stage version and re-issued it under the new title. This revised edition is the most easily available today and remains the best-known iteration of the story – not least as it was also used for many film versions of the book and play.

“Clever-clever; aren’t you clever, Mister Bliss!” Cora’s voice was shrill and triumphant. “But The Ringer’s got you where he wants you.”

Henry Arthur Milton, alias “The Ringer,” is a supertypical Wallace creation – a  vigilante who metes out justice in his own way and is feared by both the criminal classes and Scotland Yard. He is also a master of disguise, so the police have no idea what he looks like. He was reported as having died in Sydney, Australia, but when his sister’s body is found floating in the Thames, he comes out of hiding. He blames shady lawyer Meister for her death and eventually Scotland Yard are inveigled into providing protection, in the hope of catching the Ringer. The cast of characters includes Bliss, a detective who has been based overseas but has come back just for the occasion sporting a brand new beard (…);  Inspector Wembury, who plans to marry Meister’s secretary, Mary Lenley; and Dr Lomond, an elderly gent who wants to include the master criminal in one of his books. Soon the Ringer’s wife, Cora, also arrives on the scene, so everybody knows that her husband can’t be far behind.

“No woman is wholly saint, or, in this enlightened age, innocent of the evil which rubs elbows with men and women alike in everyday life.”

The book, a sort of cross-breed novelisation of the stage version of Wallace earlier book (!) – a bit like Wallace’s later book The Terror, which I previously reviewed here) – and  is pretty entertaining in its own way, though discerning the true identity of the Ringer isn’t too tough. It can be pretty creaky, as evidenced by the reliance on secret passages, but this was a big hilt in its day (it ran for over 400 performances in London’s West End) and apparently the secret entrances were definitely part of the original appeal to 1920s audiences, so one shouldn’t be too harsh on what is meant only to entertain. The play was staged many many times over the years afterwards (though seems to have never made it to Broadway), and filmed often too. As well as several international versions for television, the many adaptations of this story for the cinema include the following made in Britain and Germany:

The  Ringer from 1952 marked the directorial debut of Guy Hamilton, hitherto one of the best ADs in the business and starred Herbert Lom as Meister and Donald Wolfit as Dr Lomond. The show however is stolen completely by William Hartnell, who as the cockney Hackitt kept reminding me of Michal Caine at his most expansive. His scenes, especially those he shares with Dora Bryan as his common-law wife, are a sheer delight. This version, taken from the stage play, compresses the narrative to a quite considerable degree and works best as a fast-moving comedy – at a mere 77 minutes it certainly never really pauses for breath!

It doesn’t try too hard to disguise its stage origins (it mainly takes place in two sets – Meister’s house and the police station – with a bit of location shooting for exteriors thrown in) though there is a very impressive location interlude on the rooftops of the buildings around Piccadilly Circus that is very well shot and makes surprising use of handheld cameras. The script by Val Valentine makes several changes to the play, especially in terms of the character played by a very young Denholm Elliott, originally Mary’s brother but now her boyfriend. It also simplifies the plot considerably and changes the big murder scene, which instead of the original stabbing uses a gimmick that fans of The Four Just Men will instantly recognise. The stabbing and climax was more closely followed in the 1964 German version released as Der Hexer (literally, ‘The Magician’), which is otherwise part of the stylistically flamboyant and increasingly parodic series of Wallace films produced by Rialto in Germany. The plot is adhered to fairly faithfully in the sense that the beginning and end are all from Wallace – on the other hand, most of the middle is utterly outlandish and has nothing to do with the book or play. For starters the Ringer’s sister now gets dumped in the Thames courtesy of a submarine (!) while Meister is now in league with a girls’ school which he uses as cover for white slavery (!!) There are shootouts underneath castles, gun battles on rooftops and in one delirious sequence, an attempt is made on a man who may or may not be the Ringer (series stalwart, Heinz Drache) by dynamiting a whole building he has been lured to! Most of the character names have been changed too.

However, there are also plenty of amusing touches (along with amped up sexy badinage, inevitably added to make the story more contemporary, though this is still very mild indeed), including a bizarre shot in which a nervous Meister makes a phone call, which is shot by placing the camera behind the radial dial so we see his face through the finger holes!  There are also plenty of in-jokes (the main inspector’s given names are Edgar Bryan …) and there is even  a break in the narrative with a title card at the climax asking if the audience has yet managed to ferret out the true identity of the Ringer! The climax of this version of the film is in fact more faithful to the detail of the play than the 1952 version, though ultimately they all conclude the same way.

I submit this review for Bev’s 2015 Golden Age Vintage Mystery Challenge Bingo in the ‘one book with a lawyer’ category as the shady shyster Meister is so central: 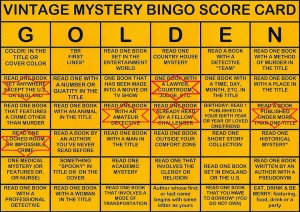