Posted on 6 December 2011 by Cavershamragu

Dame Agatha Christie apparently disliked most of the movies adapted from her work, not without reason in some cases, though there are several honourable exceptions. Particularly worthy of note are the blackly comic 1945 version of And Then There Were None and Billy Wilder’s near-perfect rendition of her theatrical whodunit, Witness for the Prosecution (1957). The most financially successful however remains Murder on the Orient Express (1974) from the producing team of Richard Goodwin and John Brabourne. Its success launched a series of star-studded period films made from her books and lead more directly to three follow-up films from the same team. The first, Death on the Nile (1978) is perhaps the best of the bunch but it made less money than its predecessor, which may explain why they decided on a change of tack for their next film. In fact they moved away from the exotic Poirot novels set overseas for the more traditional British country village setting of a Miss Marple mystery. The resulting film, The Mirror Crack’d (1980), is easily the least well-known of the quartet (the other was Evil Under the Sun (1982) which returned to Poirot and foreign climes). And yet, in many ways, it deserves to be savoured as the most daring and original of this brief series – and certainly as the funniest.

Originally published in 1962, the novel is changed quite considerably and relocated to 1953, the year of the coronation of Queen Elizabeth II and is now set during the making of a movie about the first Elizabeth and Mary Queen of Scots, the latter to be played by movie legend Marina Rudd (Elizabeth Taylor). Set in the world of movie make-believe, this is a murder mystery for connoisseurs that both revels in the conventions of the genre while gently poking fun at them too. 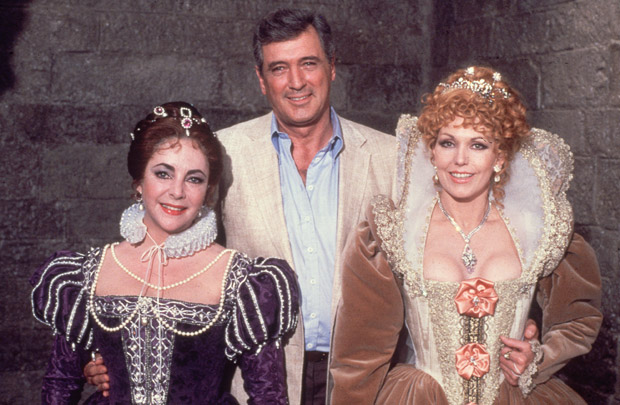 It begins in glorious black and white with an external shot of an opulent country home (which is clearly a model). Everyone speaks in cut-glass accents and acts very stiffly indeed – a murder has been committed and Inspector Gates (Nigel Stock) has gathered all the suspects together to reveal the murderer. Just as he is about to name the culprit … the film breaks down and we cut to the village hall in St Mary Mead (now in colour). It turns out that we have been watching the ending of ‘Murder at Midnight’, a (fictitious) mystery movie starring Anthony Steel and Dinah Sheridan, two actors who acted in movies just like this at that time. It is left to Miss Marple, played by a pre-Jessica Fletcher Angela Lansbury, to reveal the identity of the (movie) murderer.

This extended pre-credits teaser is a charming touch and alone is worth the price of admission to fans of 50s British movies, perfectly setting the mood as director Guy Hamilton expertly recreates the tone and style of the mysteries that he was making at around that time such as The Ringer (1952) and An Inspector Calls (1954). By giving us the traditional rounding up of the suspects climax at the beginning rather than at the end – albeit an interrupted one – it signals that this film plans to play a little with traditional viewer expectations. Indeed, this is certainly not a film to please fans of the traditional Christie story – quite the opposite in fact, though in many ways this is a really intelligent way to adapt a book infused with movie lore. Not only did Christie dedicate the original novel to Margaret Rutherford – then playing Marple in a series of four films – but the motive for the murder of seemingly innocent movie fan Heather Babcock was in fact based on something that actually happened to legendary 40’s film star Gene Tierney.

I must admit, when I first saw this film at the cinema on its original release, I distinctly remember, at the tender age of 12, being very disappointed with it. It didn’t help that I kept comparing it with Death on the Nile which preceded it. I had liked that movie a good deal 9and still do) for its clever plot construction, gorgeous Jack Cardiff cinematography on Egyptian locations, fabulous 1930s costumes and decor and the majestic music of Nino Rota. By comparison, The Mirror Crack’d just felt incredibly small and parochial and its melancholy finale felt like a real anti-climax. As the years have passed though, I’ve come to re-assess it. Like Mike Hodges’ Flash Gordon (1980), another film released around that time that I remember being really disappointed by, it seems to me to have got funnier as the years have passed.

As the movie-within-a-movie opening makes clear, this is in fact a film that guys the whole whodunnit genre. For example, the way that the Edward Fox character is introduced, all ominous shadows and low angles, only for him to be revealed as Inspector Craddock, the ‘favourite’ nephew of Miss Marple; or the scene in which Taylor goes over the top while being questioned by the police, the camera tracking in as she seemingly reaches a pitch of paranoid hysteria, only to be caught out by Fox who recognises the dialogue as being from one of her earlier movies, at which point she bursts into gales of laughter. Equally, the fact that Miss Marple’s final deductions come far too late and make no difference at all, concluding quietly and a little flatly, is precisely because we were told at the beginning of the film that the traditional, Poirot-like rounding up of the suspects and long-winded explanations were a silly convention when the black and white movie broke down and Miss Marple provided the correct, but decidedly undramatic, solution. Most of the fun therefore derives from the witty dialogue and situations created by the disruptive injections of a Hollywood movie company into St Mary Mead. 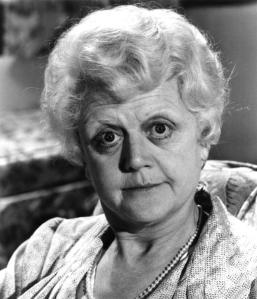 Lansbury was probably a bit young for the role at the time and as a result is perhaps giving too studied a character performance, though again with the passing of time I find myself persuaded that technically she actually gives an excellent performance. The rest of the cast doesn’t have to stray too far from established parameters though. Kim Novak is cast as Elizabeth I (!) by her producer boyfriend Tony Curtis and gets the pick of the bitchy dialogue, mainly written one presumes by Barry Sandler, the author of such camp classics as Making Love (1982) and Ken Russel’s noir maudit, Crimes of Passion (1984). Rock Hudson is as ever utterly reliable as the director trying to cope with an unstable wife and unstable movie production, while Geraldine Chaplin, as the secretary secretly in love with him, gets a spectacularly nasty death scene. There are tons of great British character actors and even a young Pierce Brosnan can briefly be spotted being clutched to la Taylor’s bosom when she’s playing Elizabeth I in the studio (definitely a step up in my book from the IRA killer he had previously played in The Long Good Friday!) Charles Gray even pops up as a butler, while Fox has a great time as the movie-obsessed but quite shrewd inspector. His soft-spoken prodding (and puncturing on occasion) of the Hollywood suspects is nicely contrasted with the low-key discussions in which he goes over the case with his aunt, who here takes a back seat after straining her ankle. She rallies for a final resolution, but as I say, in fact arrives far too late to make any difference.

To me this is a clever and knowing movie, one that at times gets even quite close to parody without crossing over – but which perhaps went too clearly against audience expectations for real popular success. In many ways the next and final one of the sequence, Evil Under the Sun, is probably the one that most amiably combines the traditional Christie structure with parodic characters and dialogue without straying too far from the genre path. Christie’s 1962 novel has since been adapted for television with both Joan Hickson and Julia McKenzie as Miss Marple (the latter version using Christie’s full title, The Mirror Crack’d from Side to Side) – neither for my money is as imaginative, funny or clever as the 1980 movie version.