Posted on 13 September 2013 by Cavershamragu

Edgar Wallace made a real splash with his debut novel, though perhaps not quite the kind that he had intended. Originally promoted with the offer of a huge prize for anyone who guessed the ending, Wallace eventually had to declare bankruptcy as too many people guessed correctly and the improvident author had failed to limit the number of potential winners. It remains one of his best-known – but how does this locked room mystery hold up today?

I offer this review as part of Bev’s 2013 Vintage Mystery Challenge in the ‘Murder by the Numbers’ category; the 2013 Book to Movie Challenge at the Doing Dewey blog – for links click here; and Patti Abbott’s Friday’s Forgotten Books meme over at her fab Pattinase blog.

“… we kill for justice, which lifts us out of the ruck of professional slayers”

When this book was published anarchists and revolutionaries were, according to the yellow press, hiding behind almost every sofa plotting the downfall of Western society – this was during the lead up to the First World War and the overthrow of the Tsar of Russia, a time of great instability and fear in Europe. In 1907 Conrad published his classic take on the subject, The Secret Agent (review coming to Fedora soon), based on the Greenwich bombing of 1894, and four years later came the Sydney Street Siege. The fact is though that socialists, Suffragettes and even union organisers campaigning for the 8-hour working day were often lumped together with terrorist groups, in part following tragic event like the ‘Haymarket Affair’ in Chicago, when a bomb was launched during a rally for worker’s rights. It is in this context that journalist and wannabe author Edgar Wallace (1875-1932) crafted a story that exploited these fears but which, perhaps daringly, also sought to suggest that such people might even be considered heroes.

“The Bill that you are about to pass into law is an unjust one … it grieves us to warn you that unless your Government withdraws this Bill it will be necessary to remove you, and not alone you, but any other person undertakes to carry into law this unjust measure”

When the novel begins the Four Just Men (FJM) are already notorious after carrying out more than a dozen assassinations over the previous five years, bumping off important people who they believe deserved to die but were beyond the reach of the law. At present the group is made up of anthropologist Leon Gonsalez, artist George Manfred and the chemist Poiccart, while a new and expendable recruit, Miguel Therry, a criminal with special skills, has been temporarily drafted in after the death of the original fourth Just Man (there are in fact no women of any importance in this story). The original three are independently wealthy and suffered some (unspecified) form of injustice so extreme that they now feel enabled to dispense fatal retribution.

“You and I and Poiccart and Gonsalez will kill this unjust man in a way that the world will never guess – such an execution as shall appal mankind. A swift death, a sure death, a death that will creep through the cracks, that will pass by the guards unnoticed.”

The British Secretary of State for Foreign Affairs, Sir Philip Ramon, is being threatened with death by the ‘Four Just Men’ (as they sign themselves) for attempting to pass the ‘Aliens Extradition (Political Offences) Bill’, which would remove protection from extradition for foreign nationals living in exile in the UK. To stop him the FJM plainly state that on a certain date and by a certain time he will be dead if he doesn’t withdraw the Bill, in effect seeking to hold the whole government to ransom. The book does have a traditional detective, Superintendent Falmouth, but the interesting thing here is that we are much more concerned with the FJM, who are presented as honourable and decent men driven to murder by the direst

social and political necessity. And yet by any definition these men are terrorists, bringing a surprisingly contemporary dimension in its somewhat equivocal approach to traditional morality and certainly lifting this mystery above the norm. The entire novel is built around a (it was hoped) unguessable murder method and Wallace very cannily matches the hubbub he hoped to generate with the publicity for the book with that within the story itself, in which the British public, stoked by coverage in the tabloid the ‘Daily Megaphone’, eagerly awaits to see if the FJM will be able to carry out their terrible crime. In effect Wallace created a story in which the contest to outguess the author is also part of the narrative.

Wallace does eventually have someone die in a hermetically sealed room and the method is ingenious, though I dare say that practised fans of the genre may well guess it before the book’s closing pages. But even if you figure out the murder method, what you might find of interest is the ambivalence with which it presents its protagonists, though one’s opinion might slip once they kill an otherwise innocent pickpocket who happened to be in the wrong place at the wrong time. To a certain extent this tends to reflect Wallace’s background in sensational news stories, more interested in grabbing readers with a bold idea than the underlying detail or creating genuine empathy with any of the characters. 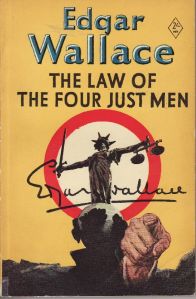 Wallace had to sell the rights cheap when he went bankrupt but there were several sequels over the years. The entire series is made up of:

The entire series of books can be downloaded as part of the Gutenberg Project.

The novel has been adapted for the screen on several occasions. The first was in 1921 and is, by all accounts, very faithful to the original, with all the major characters represented though the script by director George Ridgewell does change the FJM’s target into a villainous factory owner, so making them more obviously heroic. The novel was later turned into a half-hour TV show in the late 1950s with the leads played by Jack Hawkins, Richard Conte, Dan Dailey and Vittorio De Sica as globe-trotting righters of wrongs, each episode featuring one of the leads in turn – you can view some of them online here. Much more entertaining though is the 1939 version (released in the US as The Secret Four) made at Ealing Studios by director Walter Forde, an expert in light thrillers and I’ll be reviewing it in 10 days time. For more about this book, make sure you read Patrick’s review on his blog, At the Scene of the Crime, as well as David L. Vineyard’s overview at Mystery File. as well as Steven Fielding’s in-depth analysis at Ballots & Bullets.