Posted on 2 December 2016 by Cavershamragu

Welcome to something a bit special today folks. After years of pleading and cajoling, our pal Colin (aka ‘Livius’) of the mighty fine Riding the High Country blog has agreed to write a guest post for us here at Fedora. As befits such a special occasion, we have a very unusual book from one of the great names of Golden Age detective fiction. Published to coincide with the 40th anniversary of the first Queen novel, this is a non-series novel that is often overlooked. Let’s see how well it holds up – over to you Livius, me old china:

I submit this review for  Patti Abbott’s Friday’s Forgotten Books meme over at her fab Pattinase blog.

Those buildings across the Green looked like falsefronts, the whole thing was taking place on a Hollywood back lot. All it needs are a camera and a director – and there they come to the background music of the noon whistle from the firehouse.

Sometimes you get the feeling that stories are tailor-made for the movies, that a book has been written with an eye to its cinematic possibilities. Now I’m not gong to claim that’s the case with Ellery Queen’s 40th anniversary novel, Cop Out, but that little quotation I borrowed and used above suggests to me that Queen was at the very least aware of how easily the tale could be transferred to the screen. And that’s not the only notable aspect of this unusual EQ novel.

New Bradford is one of those small American towns where everyone knows almost everyone else, and even those who left can feel reasonably confident that  nothing has changed too radically should they decide to return. The tale  opens with a disillusioned, middle-aged bookkeeper waiting around for three criminals to turn up at his place of work. One of the trio is Goldie, who is a former resident, and she and her companions are there for a payroll heist. Deciding that a three-way split is preferable, the gun-loving leader, Furia, pops three slugs in their inside man and they’re on their way. The only problem is that even careful plans can unravel due to unforeseen events, like a dead body and a missing $24,000 being discovered before the getaway is complete. Now Goldie has changed some since she was growing up in New Bradford, but in that flashy way that gets a girl noticed in a hick town – and that’s without factoring in presence of her volatile lover and Hinch, the slow-witted muscle.

“It’s got to be put somewhere safe till they stop searching cars. The shack would be good, but we’re cut off from there till they get fed up and figure we made it out before they set up the blocks. Meantime – the way I see it, Fure – we need help.”

In times of strife regular people cal on the authorities for help, and very often it will be the police. In a way, that’s exactly what our three hoods do in New Bradford; Goldie persuades the others to do what no-one would expect and use the cops, or rather one particular cop, to protect them and their loot from the cops. This is the kind of backwards logic Goldie favors throughout, and will crop up again in another form later on. For now though, it takes us to the main part of the story and the real protagonist, Wes Malone. Malone is a town lawman and a family man too. Goldie, Furia and Hinch figure that such a man would prove reliable, especially if his little daughter was a held hostage as a form of insurance. So there you have it, the story develops into a cat and mouse game of psychological warfare where Malone has to balance notions of duty against his all-consuming sense of responsibility for his family.

“That’s the beauty part,” Furia said. “A cop’s got to know the facts of life, don’t he? He ain’t going to panic and try something stupid.”

In 1929 Frederic Dannay and Manfred Lee created Ellery Queen, both as an author pseudonym for themselves and as a character. The first novel, The Roman Hat Mystery, set the early template for their puzzle plots tackled by a young man clearly modeled on Philo Vance. Over the years Dannay and Lee would alter and tinker with the formula, smoothing out some the rough edges and humanizing their creation in the process, moving him out of New York to Hollywood and the fictional Wrightsville as part of the maturing process. The point is the character of Ellery Queen and the style of writing of the author(s) Ellery Queen changed a great deal over time, and the later works are very different in tone and content from the initial ones. And then there’s Cop Out with its violence, mild profanity and philosophical musings on individualism vs collectivism.

As I said before, 40 years had passed since the publication of the first EQ novel, and both society and the lives of Lee and Danny had experienced a few shifts. They started out as young men when the classic whodunit was king, but by 1969 Lee’s health was poorer and the detective story had lost a lot of ground to the hard-boiled crime variety, where the only puzzle was how the characters were going to make it to the end in one piece. While Ellery Queen had by no means remained mired in the conventions and style of the 20s or 30s, the name still wasn’t one which was associated with the kind of two-fisted earthiness to be found in Cop Out. Throughout the 60s Dannay and Lee had been farming the name out to ghost writers, and that led to (let’s say) a certain variation in the tone and style, although for the most part they remained recognizable as EQ books. With Cop Out not only are Ellery and the other familiar faces absent, but there’s also no real mystery to be solved That’s the main thing anyone coming to this novel fresh needs to bear in mind – it is atypical Queen.

Anyway, although it’s not typical, both Dannay and Lee maintained it was authentic and was not one of the titles which ended up being ghost written. I started off by mentioning the cinematic feel of the book and that’s one of its strengths – it’s snappy and pacy and reads like a tightly scripted film. Whether or not one enjoys the book will depend heavily on one’s tolerance for the hard-boiled elements – personally, I’m OK with them – and acceptance of the fact this is not the kind of traditional murder mystery the EQ name generally implies.

I’d give it three stars out of five. 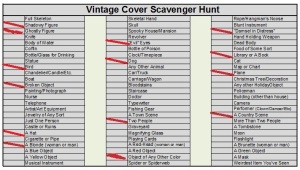