Posted on 6 May 2016 by Cavershamragu

No Orchids for Miss Blandish is a famous book that for years only aficionados have been able to read in its original, unexpurgated version, and the same goes for its less well-known follow-up, Twelve Chinks and a Woman (as it was first known in the UK). Those very nice people at Stark House Press have remedied this by publishing the original uncut versions of both texts in this essential double-bill that comes with a fascinating essay by John Fraser that looks at the publishing history and reception of Blandish.

She flashed round on him, spitting like a cat.
“I tell you this is phoney,” she stormed. “You’re lying.” – from No Orchids for Miss Blandish

No Orchids for Miss Blandish remains easily the best-known work published by British writer René Brabazon Raymond (who published most of his nearly 100 books either as ‘James Hadley Chase’ or ‘Raymond Marshall’). It marked his debut as a novelist and with its extreme violence and heavy doses of sex and drugs was clearly intended to make a splash – which it certainly did! In 1939 it was met with extraordinary dislike by critics and was, perhaps not coincidentally, a gigantic hit with the reading public. This was mainly due to its sensationalist approach to its fairly nasty subject matter (the eponymous heiress is kidnapped by gangsters who then fall out in brutal fashion while she undergoes various forms of violence and degradation). However, almost immediately, publishers, and Chase himself, started to tinker with the text, reducing its most extreme passages. The approved text in general circulation for the last half century or so in fact has been derived from some of the limited changes first made in 1942 and more radical alterations Chase imposed for a 1961 paperback reprint. These substantially amended the story, changed the fate of some of the characters and toned down its depictions of sex and violence quite considerably. This has now all been restored and it does make a quite considerable difference – the text is still quite shocking in fact, not just for the extra sex and violence, but for its sheer cynicism and sense of cosmic despair.

“He ain’t gettin’ her back,” Ma Grisson said.
Eddie thought for a moment. “You rubbin’ her out?”
“”Slim wants her,” Ma told him. “When he’s through with her she gets knocked off. She’s seen too much.” – from No Orchids for Miss Blandish 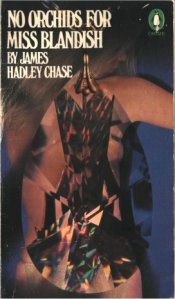 As I previously pointed out in this post, even some modern sources have been absurdly, even hysterically, critical of the book but to me this still seems quite a well structured and thematically rich work – for instance, the fact that Miss Blandish has no first name points to her being somehow incomplete, as per the title, a theme explored in an original and unusual if sometimes somewhat murky fashion. Despite the sordid milieu, high body count and roughness of some the writing (and some very unconvincing use of American slang), the book still makes an impact and deserves to be read. George Orwell famously took the novel apart in his 1944 essay ‘Raffles and Miss Blandish’ (which you can access online here) and it remains a fascinating analysis that does not in fact play down Chase’s skills – the argument is purely ideological. For an especially detailed analysis of the book, its various possible inspirations and the bewildering changes made to the various editions over the decades, you really must check out John Kelly’s long and fascinating essay, Some Orchids for James Hadley Chase.  Despite what you may feel about violence in fiction (I’m not keen), generally speaking the 1939 version is certainly preferable so it is great to have it easily available again in a good paper edition.

The Cuban had given one high-pitched squeal of terror as he saw somethign coming at him, then Fenner was on him. – from Twelve Chinamen and a Woman

Pretty much the only characters that survives Blandish unscathed (comparatively speaking) is private detective Dave Fenner and his secretary Paula, who star in the follow-up Twelve Chinamen and a Woman (as it was subsequently reprinted in the US). Since the Blandish case, they have relocated to New York but after six months not a lot has been happening. And then Marian Daley enters their office, and things start to happen at top speed – here is a brief summary of just what happens in the opening chapter: Marian says she is looking for her sister, who has fallen in bad company in Florida, and makes a strange reference to twelve Chinamen. She then shows Dave the terrible bruises on her back to prove that she is serious about her search. She hands over $6,000 and just as Paula is trying to book her into a hotel for safe-keeping she runs away. Then a dead Chinamen is planted in the Dave’s office for the police to find. Then a pair of Cuban gangsters arrive and beat the hell out of Paula and Dave. He then manages to track them down and kills them both after finding the remains of Marian’s body in their bathroom (as she has been partially dismembered, he can only identify her by the bruises on her back). He then follows a clue and heads off to Florida! Now, admittedly there are only five chapters in this book (it was a common complaint that Chase’s early books had too few chapters) but this is breathless and violent stuff.

“Those two Cubans got hold of that girl, killed her and carved her up. I caught them cartin’ her away. They’re dead. I killed ’em both. Don’t interrupt. Let me tell you fast” – from Twelve Chinamen and a Woman

What is most startling here is that if you changed the lead characters names to Mike and Velma and made the villains into Commies, then this could easily pass for a Mickey Spillane adventure from a decade later, so Chase certainly deserves credit for picking up from where James and Paul Cain left off and running with it. On the other hand, I can’t imagine Mike Hammer ever reaching the point, as Fenner does here, or being so badly beat up that he tries to commit suicide, not once but twice, before the beating re-commences. Incidentally, while the debt to the Cains and Faulkner is undisputable, Fraser in his essay makes a very good case for Jonathan Latimer’s 1938 minor classic The Dead Don’t Care as being a much greater influence on Chase’s first book.

Twelve Chinamen certainly makes for an exciting read, keeping your interest by moving at a tremendous pace – but admittedly is not as memorable as its predecessor. The American vernacular is poorly rendered and the plot overly convoluted to little real purpose – but more importantly, it lacks the earlier book’s hypnotic power and troubling subtext of sexual perversity and also suffers from not really able to find an equivalent for the tragic figure of Miss Blandish herself. For all that, it is well worth a read for its energy alone and is certainly the right companion for this superb double-bill from Stark House Press, easily one of their best publications to date.

I submit these two reviews for Bev’s 2016 Golden Age Vintage Scavenger Hunt in the ‘Jewelry’ category (for the penguin edition of Blandish) and ‘Redhead’ (for Chinks): 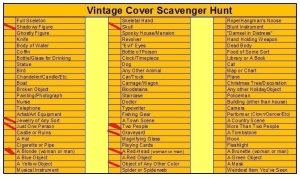