Posted on 1 December 2015 by Cavershamragu

Waugh was one of the founding fathers of the American police procedural, following on from Lawrence Treat and Sidney Kingsley and opening the way to the likes of Ed McBain. His best and most widely read book remains the classic Last Seen Wearing, but the later Sleep Long, My Love is also very good and introduced his series character Fred Fellows, Chief of the Stockbridge, Connecticut PD.  The book was filmed soon after its publication by writer-director Val Guest as Jigsaw. It all starts with a break-in …

“Now he knew he would have to kill her.”

Set between 26 February and 13 March 1959, this follows the detailed investigation into the discovery of the trunk of a female body hidden in the basement of a secluded, recently rented little house. The trouble is there are no identifying characteristics left, no idea how the woman in fact died or what happened to her ‘husband’ John Campbell, who may or may not have been her real husband (and whose name is probably fake – the initials on her luggage says ‘J.R.’). Even the lease has been stolen after a burglary, so there is no copy of the man’s signature. But why did her burn all but not all of the body? And why were both bedrooms used when only the man and woman had ever stayed there?

Fellows and Sergeant Wilks really have their work cut out for them and the fascination is in seeing how they start with a seemingly impossible situation, but slowly and surely manage to bring together a variety of seemingly insignificant details (initials on a suitcase, a dent in a car, a scrap of paper) to get closer and closer to finding a solution – topped by a neat twist that is a genuine and welcome surprise. There are weaknesses though, most notably the subplot about another woman, who also has the same initials as the victim and whose name is found on a piece of paper in the house and who it transpires also passed the night with the murderer, while well embedded in the final unravelling is also just a bit too convenient and contrived. But for the most part this is an exciting and low-key investigation, simultaneously banal in its every day detail but riveting in its storytelling – a very neat trick.

The film version relocates from Connecticut to Brighton, on the British coast but is otherwise remarkably faithful. Jack Warner, then already well-established as the TV’s favourite copper, Dixon of Dock Green (BBC, 1955-76) plays Fellows and Ronald Lewis is Wilks. Val Guest handles his story with his usual tight control and understatement (there is no music), while the use of real location is a major selling point.

To stop the telling be too pedestrian, Guest deploys a number of nifty visual touches like a flashback signalled by a passing car suddenly changing colour to match the recollection of a witness; and a series cuts from a succession of messages all conveyed by teletype, the machines seemingly asking and answering each other’s questions. The cast is generally very capable, though Yolande Donlan (Mrs Guest in private life) is a bit hard to believe as the mousey and inexperienced girl who has a fit of hysterics when told she spent the night with a killer (and his dead victim in the room next door). John Le Mesurier on the other hand is very well cast against type as the seemingly stern father of the murdered woman who crumbles completely on hearing of her death. Together with Hell is a City (1960) and 80,000 Suspects (1963, I reviewed recently here), Jigsaw forms a loose trilogy of manhunt thrillers all made on location around the British isles (Manchester, Bath and Brighton) written, produced and directed by Guest in gleaming black and white CinemaScope – all are available on DVD (in the UK) and are well worth rediscovering.

See the excellent review by Holger Haase of this film over at the Hammer and Beyond blog. My dedicated microsite on Hammer Studios and its thriller films is here.

DVD Availability: Recently released on DVD in the UK 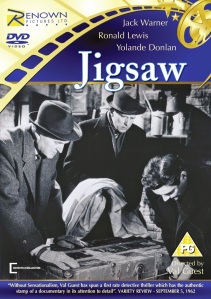 by Renown in a very decent anamorphic widescreen edition that offers a mostly very good print with only a few scratches here and there.

I submit this review for Bev Hankin 2015 Golden Age Vintage Mystery Challenge bingo in the ‘published in the year of a loved one’ category as this came out in 1959, when my cousin Simon was born: 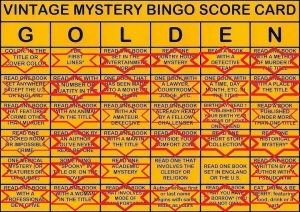