Sherlock Holmes and the Voice of Terror (1942)

Posted on 28 April 2015 by Cavershamragu 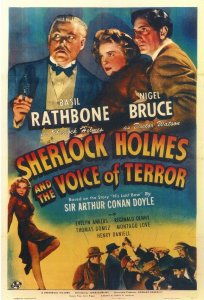 According to the publicity department, in 1942 Universal Pictures closed a $300,000 deal with the estate of Sir Arthur Conan Doyle to make a series of Sherlock Holmes second features. The option would last for 7 years and provide access to 21 of the original short stories. Ultimately 12 films would be made, all starring Basil Rathbone and Nigel Bruce, reprising the roles they had already played screen and on radio but this time they would be set in contemporary times. The first pitted the celebrated Victorian heroes against the Nazis …

Universal Sherlock Holmes # 1
Source material by Sir Arthur Conan Doyle: His Last Bow (1917)
Sample dialogue: “Elementary, my dear Watson”
Original filming dates: 6 May to 23 May 1942
Sherlock in disguise: no
Universal’s Baker Street Regulars: One of the joys of this series is spotting the appearances of the various members of the stock company of supporting actors who appeared throughout the series in a variety of roles, sometimes as villains and sometimes as victims. In this one we have Henry Daniell (1/3), who would later also get to play Moriarty; Olaf Hytten (1/6) who gets a decent role as Fabian Prentiss; and Gavin Muir (1/4) as the eponymous voice; and Hillary Brooke (1/3), who here has a bit role as a driver and would soon graduate to leading lady status; and Harry ‘The Henchman’ Cording (1/8), who hes one of the best scenes in the film as an old lag who discovers to his horror that Holmes got him put away for 10 years due to his own stupidity.

The original story:
This tale of espionage, subtitled ‘The War Service of Sherlock Holmes’ is told in the third person (and not, therefore, narrated by Watson). The focus in the first half is almost entirely on the activities of Von Bork, a German agent who, on the eve of The Great War, is preparing to leave England with the a vast amount of intelligence he has accumulated over a period of 4 years. He awaits the arrival of Altamont, an Irish-American who will sell copies of crucial Naval secrets. However, his plans are scuppered as ‘Altamont’ turns out to be Sherlock Holmes in disguise, who instead of the secrets delivers a copy of his new book on beekeeping!

This is a slight patriotic vignette, written at the height of the war, mostly notable for its rousing final speech, which made its way into Sherlock Holmes and the Voice of Terror.

“Good old Watson! You are the one fixed point in a changing age. There’s an east wind coming all the same, such a wind as never blew on England yet. It will be cold and bitter, Watson, and a good many of us may wither before its blast. But it’s God’s own wind none the less, and a cleaner, better, stronger land will lie in the sunshine when the storm has cleared.”

The Film:
After playing Holmes and Watson in two period films at Fox in 1939 – The Hound of the Baskervilles and The Adventures of Sherlock Holmes – Basil Rathbone and Nigel Bruce continued to play the characters very successfully on radio. It seems that Fox, already disconcerted by the closing of foreign markets after the outbreak of war, ultimately grew weary of dealing with the notoriously difficult Doyle estate and opted not to continue with its Holmes and Watson series. Indeed, it was in the process of retiring its various recurring detective characters anyway – within a couple of years their Charlie Chan, Mr Moto and Mike Shayne series would be no more. Ultimately the Doyle family struck a deal with Universal Studios for a series of medium budget support pictures (in the US they would frequently be paired with Abbott and Costello comedies in fact) to be made at a rate of three a year. 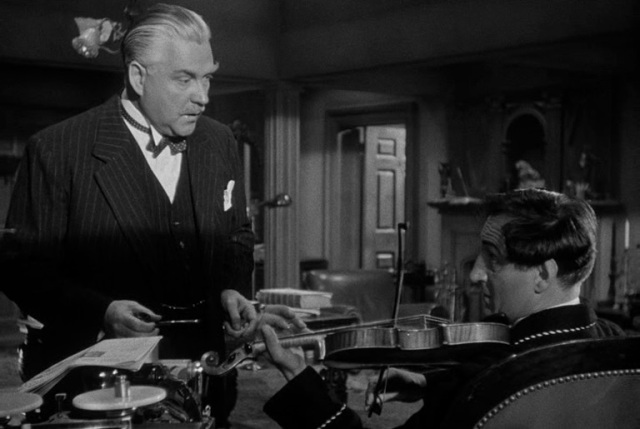 Sherlock Holmes and the Voice of Terror owes very little to the original story other than Van Bork, the wartime setting and the final speech. Instead, in a story originally produced under the working title Sherlock Holmes Saves London, the great hero squares off against a Nazi fifth column on British soil, a mole at the height of the government’s top-secret ‘intelligence council’ and propaganda broadcasts from Germany clearly based on the activities of ‘Lord Haw Haw.’  Holmes film adaptations up until then, and there had been dozens, had almost always been set in the present day – and so were these, both to reduce the budget and in the hope of finding an audience wanting to see stories about the war after America entered the conflict. Universal none the less felt the need to explain this slightly anachronistic approach of having the Nazis as the villains, especially given that the two previous entries the acting duo had made at Fox were (pretty much uniquely up to that point) period films set in the Victorian era (there is even an amusing joke with Holmes going for his deerstalker on the hat stand, and Watson rebuking him, “You promised ….” before he puts a Trilby on instead):

“SHERLOCK HOLMES, the immortal character of fiction created by Sir Arthur Conan Doyle, is ageless, invincible and unchanging. In solving significant problems of the present day he remains – as ever – the supreme master of deductive reasoning.” – opening title card from Sherlock Holmes and the Voice of Terror

To help investigate a series of attacks on British soil (mainly represented with stock footage and scenes from previous Universal movies like The Invisible Man and Saboteur), Holmes engages a tart with a golden heart, Kitty, who is clearly based on the same-named character from the ‘The Illustrious Client.’ This takes place in a rather large Limehouse tavern, which emphasises the sheer splendour of Woody Bredell’s cinematography (he would go on to shoot such classic Film Noir for the studio as Phantom Lady and The Killers). No Sherlock Holmes movie would ever be shot in such fine expressionistic fashion again. The main villain is played by Thomas Gomez, the thick-set Broadway actor here making a remarkable on-screen debut (he would later play Moriarty to Rathbone’s Holmes on stage), while Kitty is played by studio stalwart Evelyn Ankers. Kitty ends up being the Nazi’s mistress in what was, for its day, a surprisingly adult depiction of their relationship. But then, the Holmes universe of this film is wonderfully abstract …

The Universal Studios series of 12 Holmes adventures is decidedly sui generis. For instance, Baker Street remains utterly Victorian, as does the tavern where Kitty dwells, while the plot couldn’t be more up-to-date, with much emphasis on new-fangled technology like hidden patterns in radio transmissions – Sherlock even has a lightbulb at the end of his walking stick! The look is Noir but the climax is Gothic, being set in a bombed out church, albeit one taken over by Gestapo officers in their uniforms. And then there is Rathbone’s decidedly bohemian haircut, which was even the subject of jokes in Punch magazine at the time (after the first 3 films he would revert to the traditional swept back look, thank goodness). One assumes it was meant to look a bit more modern and also make the actor look younger (he was in fact, amazingly, 3 years older than Nigel Bruce and turned 50 shortly after the end of filming).

The first film, in its mixture of old and modern, doesn’t quite work but once Roy William Neill took over as both director (with Sherlock Holmes and the Secret Weapon) and producer of the series (especially after the initial block of three films, the overall approach to which were planned out before he came on board), the style would become much more Gothic and contemporary references to the war would soon be dropped. This becomes very clear from Sherlock Holmes Faces Death, his first as official producer. A slightly off-centre beginning then, but an exceptionally good-looking one with a great cast and a smashing theme tune by Frank Skinner too.

For my microsite dedicated to this series of film, click here. 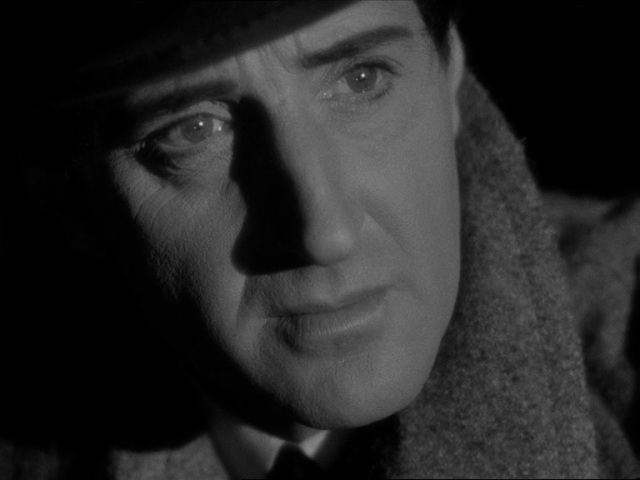 DVD Availability: Available in terrific editions on DVD and Blu-ray the world over, derived from the restorations made by UCLA. All look decent – some, such as Sherlock Holmes and the Voice of Terror, looks absolutely terrific.

67 Responses to Sherlock Holmes and the Voice of Terror (1942)