AND NONE SHALL SLEEP (1997) by Priscilla Masters

Posted on 24 April 2015 by Cavershamragu 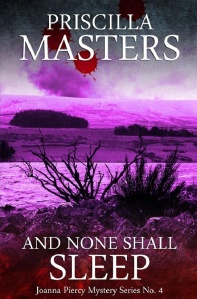 The DI Joanna Piercy series by Priscilla Masters has now reached its twelfth volume but today I am reviewing the fourth, after being sent a review copy of a new reprint by those very nice people at Telos. Piercy is knocked off her bike by a passing truck and hospitalised with a broken arm. That night a coronary patient in the same hospital has his life support intubation ripped out and walks out in his pajamas. Soon after he is found in a forest, trussed up and executed by a professional hitman. Not run-of-the-mill for the folk in sleepy Leak in Staffordshire …

I offer the following review for Friday’s Forgotten Books meme run by Patti Abbott at her fab Pattinase blog.

“Policing’s more than a full-time job. It’s wherever and whenever you’re needed. I haven’t got time to be a wife.”

Piercy has only been living in Leak for six years and as such is still thought of as a bit of an outsider – it doesn’t help that she is also considered a bit of a home-wrecker as her boyfriend, who is also the police pathologist, left his wife and daughter for her. Trouble is, even after a year together, she still doesn’t want to commit (and certainly doesn’t want any kids of her own either). So she focuses on her job – but with her arm in a cast and a Sicilian hitman in their midst, it looks like her case is also being taken away from her. Admittedly, she wasn’t making much progress. Although the man seemed to be a universally unloved solicitor (hated by his partner, wife and son), he was dying from a heart condition and had his heart attack after receiving a death threat that morning. So why would he be the object of a contract killing – who would pay to assassinate a dying man? It’s up to Piercy and her beefy sidekick Mike to figure out the motive while others take on the responsibility of finding the nasty Italian who charges eight grand a contract … and then one of the nurses from the hospital is strangled. There must be a connection, right?

“The injuries were incompatible with life.” 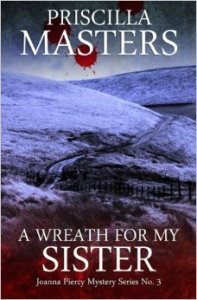 This is a quick and entertaining read that dispenses with nearly all extraneous material to focus on the essentials of the story. There are a couple of subplots relating to Piercy’s love life, but otherwise we only get the bare minimum to put the story across – and indeed are not given much of an indication at all on how the non-criminal related subplots, once revealed as red herrings, will in fact pan out. But then again, most of the supporting cast of characters is quite hard to like, so I can’t say I felt I was missing much. As such it offers an engaging enough narrative in which all investigations ultimately lead to events in a shared past and is populated with recognisable and fairly realistic (and often unpleasant) characters, very much in the mode of gritty but accessible TV drama. Piercy however is a bit of an underachiever for most of the story. She never seems to be making much headway and I was usually way ahead of her – it doesn’t help that she and her sergeant do tend to rush to judgement a bit too often. Indeed, for a police officer of such rank, she is often surprisingly naive, easily shocked by violence (she even exclaims “Gosh” in horror at one point), tragedy and deceit. It does make you wonder quite how she gained her degree in psychology, let alone make it as a Detective Inspector of several years standing!

“Okay,” he said. “You’re the clever inspector while I’m the stupid sergeant.”

It has to be said, the hiring of a Sicilian contract killer to right a wrong going back several years may be unusual but unfortunately comes across as utterly unconvincing too. The incongruity of the juxtaposition undermines the actions of the guilty party while the second killing, as so often the case in even the best whodunits, seems a bit superfluous – and again, is severely under-motivated. To cap it all, I did find Piercy’s dilemmas a bit of a chore. In a crowded marketplace when it comes to police procedurals about independent and stubborn cops, this seems to me to be defiantly middle-of-the-road mystery, short (250 pages), sharp and to the point if perhaps just a little bit thin. Perfect for mainstream telly.

Having said that, the genre has moved on a lot in 20 years and it may well be that time has not been especially kind to this book. I look forward to reading one of the more recent entries and see how Piercy and the series have progressed.

The first five books in the series have now been republished by Telos. For more information about the author, visit her homepage at: www.priscillamasters.co.uk

This entry was posted in Friday's Forgotten Book and tagged Staffordshire. Bookmark the permalink.

48 Responses to AND NONE SHALL SLEEP (1997) by Priscilla Masters