Posted on 24 March 2015 by Cavershamragu 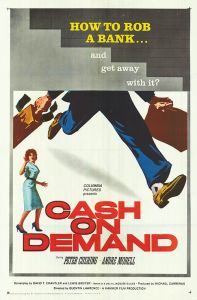 This tense real-time thriller ultimately becomes, somewhat surprisingly, a variant on Dickens’ A Christmas Carol. Peter Cushing plays the austere and unyielding manager of the City & Colonial Bank in Haversham, disliked, with reason, by all his staff. Enter André Morell, a charismatic crook who threatens to destroy all that the uptight manager holds dear, both at work and at home. Hammer Films made it on a miniscule budget and had little confidence in it – in fact it was held back for release in the UK for nearly two years. It deserved much better treatment as it punches way above is weight. So, it is 9.45 on the morning of 23 December, snow is falling and peace and goodwill quickly are soon to vanish …

I offer this review for Todd Mason’s Tuesday’s Overlooked Movie meme over at his fab Sweet Freedom blog – you should head over there right now.

“I flatter myself I am a rather uncommon thief. A common one would just make off with the money, but I can’t help interesting myself in people. It’s a failing you ought to cultivate, Fordyce.”

Told in real time across 83 minutes, we begin shortly before the bank is due to open to its customers. The staff are planning a party but know full well that Mr Fordyce will disapprove. In fact he is thinking of other things – specifically an incredibly minor book-keeping infraction for which he is planning to fire the elderly Pearson (the wonderful Richard Vernon), who has been with the company for over a decade and who would face ruin. But Mr Fordyce just won’t budge, his pernickety black and white mind turning a small irregularity into what he claims is an offence tantamount to embezzlement. Enter Colonel Gore-Hepburn who says he is doing a surprise security check from the insurers. Actually, he is a bank robber and an exceptionally cool and confident one. And very quickly the ordered little world of Mr Fordyce starts to crumble. 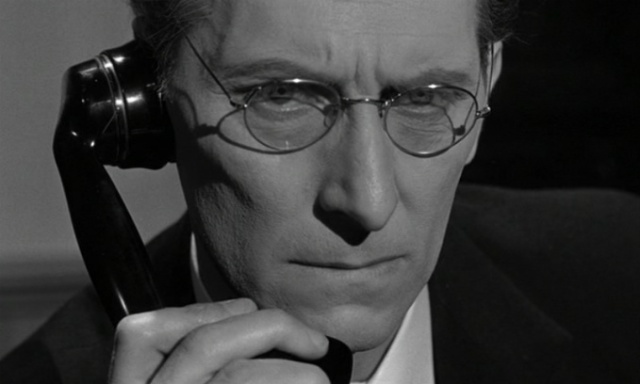 If director Budd Boetticher and writer Burt Kennedy had collaborated on contemporary suspense movies rather than Westerns starring Randolph Scott, one imagines that Cash on Demand is just the sort of film they would have come up with – a taut, claustrophobic siege in which the villain proves to be much more charming and understanding of human frailty than the nominal protagonist.

“I detest brutality. I want bank robberies to be smoother and more sociable.”

The film was based on ‘The Gold Inside’, a 70-minute television play by Jacques Gillies shown as part of the Theatre 70 anthology series on ITV on Saturday 24 September 1960. The director was Quentin Lawrence, who also made the subsequent movie with André Morell and Richard Vernon recreating their roles for the big screen. Cushing makes a great addition to the cast, playing superbly against his old sparing partner Morell – the two had starred together in the BBC TV version of Orwell’s Nineteen Eighty-Four (1954), The Black Knight (1954), the Hammer Hound of the Baskervilles (1959) and Cone of Silence (1960) and would later appear opposite Ursula Andress in the Hammer version of She in 1965.

Once Gore-Hepburn has shown his true intention to empty the vault of the £97,000 it holds, the remaining hour is a terrific example of turning the screw. The Colonel is always in control and quickly establishes his dominance over the prissy bank manager by threatening his wife and child and, in one brilliantly brutal and calculating moment, slapping Fordyce around, truly breaking the man down and making him his unwilling accomplice. While it is only at the end that the Dickensian dimension is brought centre-stage, it is quite clear that Fordyce is Scrooge, Pearson is Bob Cratchit and the Colonel in essence Marley. While we are caught up in the split-second timing of the plan (there is a great sequence in which Fordyce is forced to empty the vault and then watches, in horror, as an alarm on a thirty-second delay is set until it is almost too late), what gives the film its true greatness is the way that we see the banker change. Brutalised and humbled as he faces the reality of his own disempowerment, he is finally able to appreciate the position he has put his staff in – just when he will need their understanding, sympathy and even complicity, the most. 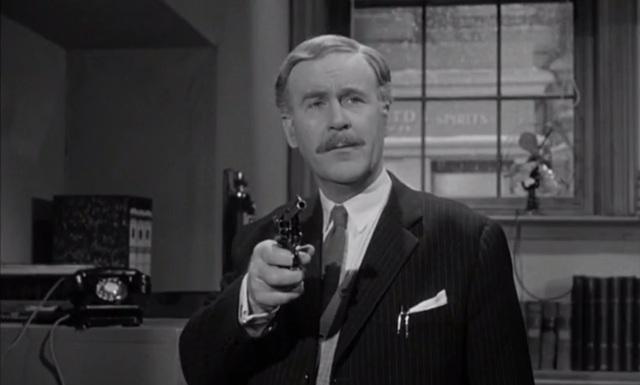 This is a truly superb film, very easy to get on DVD and online (though I shan’t link to it as it’s clearly an illegal upload), exciting for the white-knuckle suspense sequences and the brilliant fireworks between the three leads. Morell is just perfect in the showy role of the smart reprobate but Cushing and Vernon are equally good in their restrained but less showy roles. If you like suspense drama, Christmas movies, Hammer suspense starring Peter Cushing or just a rattling good yarn, then I highly recommend this superb thriller without hesitation.

My dedicated microsite devoted to the Hammer suspense films can be found here. For more information on the film, see some of the great films reviews scattered over the Internet such as Shaun Anderson’s analysis over at The Celluloid Highway; Joanna Wilson at Christmas TV History; Kevin Deany at Kevin’s Movie Corner; Steve Miller at The Peter Cushing Collection.

DVD Availability: The film is available in no frills but impeccable edition in Europe as standalone release (as part of the Columbia Essential Classics range from Impulso in Spain) or more economically as part of the Hammer Icons of Suspense DVD box in the US, which is easy to get and offers top-notch picture and sound quality for six films on three DVDs – the other titles are The Snorkel, The Full Treatment, Never Take Sweets From A Stranger, Maniac and Joseph Losey’s The Damned – you really should go and get it you know …