Posted on 22 November 2011 by Cavershamragu

This oddly titled movie is an inverted mystery about a husband who comes up with a seemingly fool-proof method to bump off his wife. As such we know the identity of the villain right from the start, though there is plenty of mystery here as well as suspense as we see the narrative unravel (in both senses). Perversely of course we always maintain a little bit of respect for such characters, secretly rooting for them no matter how callous and brutal because we admire the ingenuity of their plan and hate to see it go awry after watching all their efforts to make it succeed. Seen today what the film most resembles of course is an episode of Columbo. Like that classic TV show, we open with a wordless 5-minute pre-credit sequence in which Paul Decker (German film star Peter Van Eyck) makes detailed preparations inside the sitting room of his wife’s villa. Sealing its doors and windows, he is in fact in the final stages of perpetrating an elaborate locked room murder. Right from the start we know that the methodical Decker is ruthless, cruel  and coldly calculating – which he proves again and again as in the course of this film attempts to get away with the perfect murder – not just once but three times!

The film titles begin over the film’s peculiar snorkel signature image as we see Decker use the eponymous SCUBA gear to remain in a locked and sealed room after he turns on the gas which will then asphyxiate his wife, who appears to be snoozing on the sofa. The next morning, before the servants arrive, he hides in a cubby hole under the floor boards only to emerge once the staff and police, who have had to break through the locked door, have left the premises. When the body is found it looks like suicide by gas but her daughter Candy (short for Candace) is unconvinced, especially as her mother didn’t leave a suicide note to explain her motive. In fact she is certain that Decker somehow did the deed since she is also sure that she saw him murder her father years before, though no one believed her. This is a bit of a weak spot in the narrative as no one seems to consider the importance of the lack of a plausible explanation as to why the mother would want to kill herself – it’s as if the fact that the murder method is so full-proof that we are led to assume that Decker in his arrogance hasn’t bothered to think it through. When Candy starts getting suspicious, the story switches tack and we refocus to see if she will manage to escape her stepfather’s murderous intentions.

Peter Van Eyck is particularly good as Decker, the stepfather with ice in his veins and his villainy is so completely without compromise that he even commits that great cardinal sin of the cinema – he kills a dog! In this case he poisons Candy’s pet pooch Toto (played by ‘Flush’, who gets his own screen credit), who inconveniently finds Decker’s snorkel in his bedroom. The rest of the cast is somewhat mixed – Mandy Miller as  Candy is a bit too old for the part and not especially charismatic though perfectly adequate, which pretty much sums up Betta St. John’s role as Jean, family friend-cum-child-minder. She is also there to suggest that she may be the reason why Decker killed his wife, but again we don’t delve into his motives to any great extent, which is a bit of a relief as it keeps the focus on the mechanics of the crime. The forces of law and order however are much better represented, with Robert Rietty in a nice cameo early as a policeman and Gregoire Aslan in great form as the inspector.

“You think I’m mad, don’t you? They all thought I was mad when I said he killed my daddy”

Mandy Miller and Robert Rietty in ‘The Snorkel’.

Although the story is quite an ingenious one (it is credited to the actor Anthony Dawson, probably still best-known for his role as the hired killer in Hitchcock’s Dial M for Murder, not to be confused with ‘Anthony M. Dawson’, one of the pseudonyms used by Italian director Antonio Margheriti), it is the structure that is particularly rewarding. Although we see the murder at the start of the film, there are many elements that do not become clear until the end, such as how Decker was able to get an alibi that placed him across the border in France at the time of the murder, how he was able to get his wife to lie down and accept her fate and how we was hoping to pacify Candy’s inevitable suspicions. Much of this is explained in a well crafted climax when Decker, having failed to drown Candy in the way that had worked with her father, now decides to re-enact the plan with which he killed her mother.

This is an efficient 90-minute thriller (originally cut to 74-minutes in the USA, but thankfully restored to full length on DVD) which, as would frequently be the case with later Sangster scripts, established a good solid working idea with an attention-grabbing gimmick and then works the plot to a natural breaking point about half-way through. It then has to start again, repeating and varying the formula, giving at worst the impression of a television drama extended and padded out beyond a natural hour-long slot but often introducing an intriguing, ritualistic feel as events repeat themselves and the tables are turned on the villain. This will be seen at its most overt (and perhaps, most successful) in his later film, Nightmare (1963).

This was the first of a series of suspense thrillers that Jimmy Sangster was to write for Hammer Studios. Unusually for the low-budget company, the film is not only set in Italy (Hammer often set films on the Continent) but was in fact partly filmed there, mainly at the Villa della Pergola and in and around Alassio, a once popular holiday location spot on the Italian Riviera and which remains largely unchanged to this day. When first released in 1958, the film was part of new three-picture deal with Columbia Pictures in America which provided some significant investment to improve the facilities at Bray, including the building its largest stage, which was used for the first time on The Snorkel. Combined with the large levels of location cinematography and director Guy Green’s assured handling, this certainly looks and fee 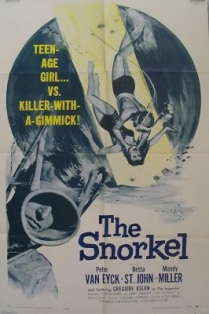 ls like an above average effort for the studio. Historically it also makes for fascinating viewing for the way that it also looks ahead to many of the suspense thrillers that Sangster would later on write for Hammer. Although the point of view is that of the killer, which Sangster would generally avoid, many of the other elements are already in place including starting the film with a murder already having been committed and a young woman being driven to the edge of insanity through a conspiracy. Sangster’s subsequently would refine his thriller formula for Hammer, and then repeat it in several films, which I plan to review soon as they are ll available on DVD either in the US or the UK in pretty decent home video editions.

The full list of Sangster / Hammer thrillers is as follows, with links to my reviews:

Hammer Studios and its thriller films is here.

The film’s trailer, very much a product of its time in its over-selling, is available on YouTube: