F is for … Fredric Brown

Posted on 16 February 2011 by Cavershamragu

Over at the always informative, market-leading In Search of the Classic Mystery Novel blog, attention has been drawn to the Alphabet of Crime, in which every week a successive letter of the alphabet has to be reflected in a blog entry either through the title of a book or the first or last name of an author. Sounds like fun – so, tipping my fedora in acknowledgement …

F is for … Fredric Brown

Some genre writers seem to have never really fallen out of fashion, Agatha Christie and Raymond Chandler being two cases in point of writers whose output, while totally different in style and approach, is instantly recognisable, easy to parody and seemingly timeless – and which has never had the embarassment of being out of print. Equally happy writing science fiction as well as crime stories, Fredric Brown is a cult author from the pulps whose profile was raised greatly in the 1980s, thanks in large measure to the series of 19 limited edition volumes published by Dennis McMillan between 1984 and 1991 but which are now sadly quite hard to find. Brown’s stories distinguish themselves for their cleverness, strangeness, surprise endings and for their sheer sense of style. Not all of them work and some are little more than jokes really, narrative one-liners, but many are an absolute delight. Some of the best of these were assembled in the collection Nightmares and Gezzenstacks. 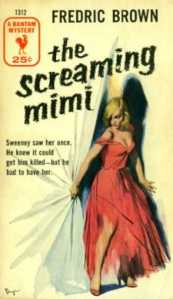 Brown was widely respected as a wordsmith by his contemporaries and won an Edgar for his first crime novel, The Fabulous Clipjoint (1947), which introduced his recurring character Ed and Am Hunter. He also had the, perhaps dubious, honour of being praised in print by such authors as Ayn Rand and Mickey Spillaine, their quotes gracing the covers of several of his books. Many of these are still available with their garish-yet-seductive covers, and within what one will find are not the sex and thrills they seemingly promise, but rather frequently witty and perceptive exploration of insanity and the criminal mind, of petty criminality and human foibles and failings, of life governed by haphazard and ungovernable factors.

Brown wrote hundreds of short stories and many short-shorts (all told in one paragraph) that are great fun, and usually rely on extreme puns. His best known short stories are probably the postmodern classic “Don’t Look Behind You” and the much anthologised SF classics “Answer”, a two-paragraph anecdote that is better known than its author and which today reads like a joke version of the Skynet plot from the Terminator series, and  “Arena” (televised on Star Trek and The Outer Limits), which perfectly encapsulate his style. Dozens of others are just as good, if you can find them. They combine insane punning humour, noirish suspense and some genuinely fresh ideas that mark Brown out as a particularly notable writer to have risen from the pulps. His strain of absurdist humour will remind some readers of Michael Avallone perhaps, but Brown is a truly sui genris author.

His best novel may well be The Screaming Mimi (filmed officially and badly in 1958 with Anita Ekberg, unofficially and brilliantly by Dario Argento as the giallo classic The Bird With the Crystal Plumage in 1969) and it is certainly one of my absolute favourites, a complex and funny inversion of the beauty and the beast theme with a smashing surprise ending. A number of his books, such as The Lenient Beast, show his mastery of multiple points of view and at his best Brown’s work reveals a sharp intellect pushing at the outer edges of genre conventions. 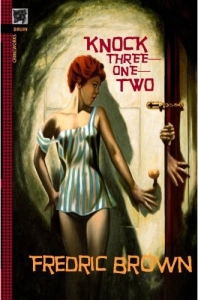 Knock Three-One-Two (1959), a story about a psycho on the loose that ends with an unexpected but perfect little emotional diminuendo, was Brown’s last major novel and was re-printed quite recently by Bruin Books with a cover well in keeping with the less than salubrious style of the paperback originals he churned out in the 1950s. It was filmed twice, first as an episode of the Boris Karloff anthology series Thriller (recently released on DVD ) and later in France as L’Ibis Rouge (1975). It is Brown’s science fiction stories though, including the hilarious Martians Go Home, (also filmed, in 1989) in which a writer is plagued by a particularly irritating invading army of little green men, that are the easiest to find nowadays.

Those interested in Brown’s life and work should definitely check out Jack Seabrook’s Martians and Misplaced Clues. This well researched book, which includes an exhaustive bibliography, provides an in-depth analysis of Brown’s major themes and obsessions both in his short fiction and novels and also provides an invaluable look at The Office, the author’s most autobiographical work, perhaps his finest publication and one which is particularly hard to get hold of. Brown is a little elusive these days, but his work deserves to be remembered.

9 Responses to F is for … Fredric Brown