Posted on 22 February 2011 by Cavershamragu

The Alphabet of Crime community meme over at the Mysteries in Paradise blog this week reaches the letter G, so I nominate …

THE GALTON CASE (1959) by Ross Macdonald

Private detective Lew Archer (known in some editions as Lew Arless, and in the cinema, as played by Paul Newman, as ‘Lew Harper’) first appeared in THE MOVING TARGET (1949) by John Macdonald, a pseudonym for Margaret Millar’s husband Kenneth (named, not insignificantly as we shall see, after his father, John Macdonald Millar). Following complaints from fellow mystery writer John D. MacDonald, the pseudonym quickly transmuted into ‘Ross Macdonald’ as the books grew in critical acclaim. Macdonald in fact was quickly heralded as the natural successor to Hammett and Chandler in the hardboiled genre, a serious author using the crime genre with literary intent and not just a purveyor of tough guy pulp fictions.

The eighth Archer novel, THE GALTON CASE, was first published in  1959 and in many ways can be seen as a turning point in Millar’s career. Although the plot (lawyer in love with a younger and highly unsuitable woman hires Archer on behalf of an ailing and cantankerous wife of a very rich man to solve a missing person case) is a partial re-write of the first Archer novel, it is deepened by being given a strong autobiographical spin. In addition its structure – an investigation into the past and its lingering effects on the present via a quest for personal identity – would serve as a template for all the remaining Macdonald novels, right up to and including The Blue Hammer (1976). 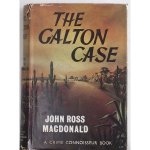 Archer is hired by lawyer Gordon Sable to find the long-lost heir to the fortune of the Galton family of Santa Teresa (a thinly disguised Santa Barbara). Twenty years earlier the newly married and father-to-be Anthony ‘Tony’ Galton had walked out on his well-to-do parents to begin a new life in San Francisco hoping to make it as a writer. Since then his father has died and his ailing mother now wants to reconcile before her weak heart finally gives out. Right from the start, it is clear that Archer is more interested in Sable’s dysfunctional domestic situation than in the case he has been ostensibly hired to do – the lawyer seems to be caught in an obscure triangle involving his mentally unstable wife and their openly hostile manservant Culligan. Shortly afterwards Culligan is stabbed to death and Archer’s car is stolen at gunpoint by the apparent murderer.

Archer hates coincidences and decides to work both cases simultaneously, eventually finding a link between Culligan and Tony – they both were at Luna Bay, a small San Francisco coastal area, at roughly the same time. During the course of his investigation, Archer finds the mortal remains of Galton, who had been living under the name ‘John Brown’ – this leads to a meeting with a young man claiming to be Galton/Brown’s son, who has also spent part of his life living under an assumed name.

It is at this point that the things become truly complex and so any spoiler-free reviewer has to take a breather. The plot, while it does have some improbabilities and a slightly unlikely murderer, is extremely well worked out so that the novel’s themes of social class and mobility are carefully married to a variation on Oedipal themes as explored by Sophocles and Freud. Kenneth Millar had recently gone through Freudian analysis when he began work on the novel, which at one time had the provisional title of ‘The Skull Beneath the Skin’, a TS Eliot line that PD James eventually got round to using instead, during which time he had confronted his own feeling of dislocation and disempowerment when as a young boy he had emigrated to Canada from California before returning again as a man. This latitudinal journey away from home and back again, and the exploration of his feelings of being both simultaneously an insider and an outsider, is bisected by a longitudinal trajectory in the plot in which a young boy, living in the depths of penury in a Canadian village (literally a ‘Pitt’) with aspirations to wealth and power, destroys his cruel father and attempts to escape from his bondage to find what he considers his rightful place in the sun. 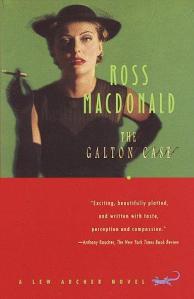 This is a fine novel, one in which a strong and exciting mystery plot is enriched with several highly engaging character studies that explores the generation gap – from an ageing beat poet and a country doctor on the way to retirement to sad young women whose beauty and sweetness has been distorted by prostitution and mental health problems – through a striking use of simile and symbolism. The debt to Chandler and Hammett is unmistakable in its strong sense of place, its wise-cracking dialogue and discerning ear for a sharp simile; crucially though Millar’s sympathies are with the poor and the downtrodden, without the political dimension and sense of ennui that defines Hammett; while Archer’s code of conduct is largely defined by his sense of empathy with the downtrodden rather than a romantic Marlowe-like chivalric code of conduct, which is not to say that he is above rescuing the odd princess or two.

It may not be Macdonald’s very finest novel – that honour probably belongs to The Chill (1964) the book that ‘does it’ for those readers that become fans, in the words of William Goldman, who wrote the screenplay for Harper (1966), the Paul Newman adaptation of the first Archer novel; but it did crystalise a developing thread in the author’s work to become a real turning point in his work and perhaps even the whole hardboiled detective genre with its psychologically penetrating character studies, feeling for the emerging teen rebellion of the baby boom generation and a moral compass defined more by empathy than outmoded codes of conduct or morality.