Posted on 26 October 2012 by Cavershamragu 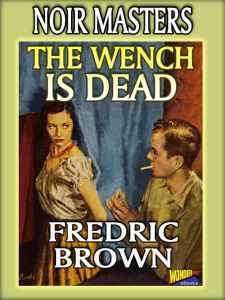 This unconventional mystery by cult author Fredric Brown has unfortunately become a little bit scarce, its absentee status probably not helped by the fact that the title, taken from Christopher Marlowe, has been used for several other novels too. The protagonist is Howard Perry, a sociology teacher from Chicago who has decided to research LA’s skid row the hard way: by becoming one of its drunken bums while working as a dishwasher for 75 cents an hour. His plan is to stick it out during the summer break then head home and write his thesis. With just a few weeks left his plans are shattered when a friendly neighbour is killed, with him in the frame as the prime suspect …

meme over at her Mysteries in Paradise blog, which this week has reached the letter W. I also offer it as part of the Friday’s Forgotten Books meme run by Patti Abbott over at her Pattinase blog. It is also eligible under the guidelines of Bev’s 2012 Mystery Readers Challenge, specifically the 8 books I have pledged to read with an educational background. You should over to all these excellent blogs and see the other reviews posted and linked-to there.

Like so many other Brown characters, our protagonist Howie drinks too much to the extent that he is starting to black out on occasion –  but also has a chivalrous side to him. He is interested in people, is basically a good guy, but deep down really wants to know what it feels like to be a bum, a drunken bum. he is 28 years old, which may explain why he thinks he can do this and then walk away from the experience and use the raw material for his doctoral thesis, which is not necessarily a mad idea but not very scientific either … So far he has succeeded in the first half of his plan, rarely eating and mainly subsisting on a diet of sweet wine, rarely washing or changing his clothes, slowly losing touch with the man he used to be. Right from the first chapter we sense a danger that he seems at the moment oblivious to, doubting his own unconvincing reassurance that he isn’t really a hopeless drunk. This is reinforced shortly afterwards when his girlfriend, prostitute and fellow lush Billie the Kid (real name Wilhelmina Kidder), talks about her drug addicted friend Mame. She tells him, with matter-of-fact certainty, that drunks and dope fiends may be able to give up for a while but in the end, in times of stress, they will always revert to their addictive patterns of behaviour. His reaction is very telling – he pours himself another drink.

“Is goodness more complicated than defeat?”

This is a seedy book in the sense that it talks about people living hand-to-mouth in squalor, though it is told with the author’s customary irony and wit. It has only a small cast of characters: along with Howie, Billie and her friend Mame, who works with her at a club and does a little hooking on the side, there are Howie’s kindly manager Burke and Ramon, the chef who despite a drug habit is also a pretty friendly chap. Then there is Ike, an ex-ad man who now refuses to even frequent places that feature advertising – and that’s pretty much it. By the time the book is over, three of these six characters will be dead, along with Jesus, one of Mame’s ‘clients’ who may have been involved in drug trafficking. The 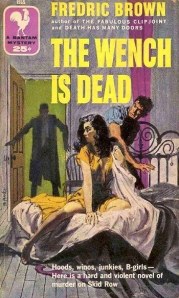 book has much in common with Brown’s later mystery One For the Road, which I reviewed here a few weeks ago. They both feature a protagonist who is out-of-place, stuck in a job and situation where he seemingly doesn’t belong, and with much of the action taking place inside bars. It also contrives a seemingly ‘happy’ ending, in which boy meets girl, finds a bundle of loot, and abandons his dead-end job and starts afresh with his gril. But much like the finale to Jim Thompson’s even bleaker The Getaway (1958), this is presented as a defeat of sorts, even retreat from normality. Like the earlier book, this presents a mystery that is ultimately solved with the murderer unmasked, but those looking for a plot-driven story are likely to be disappointed.

“But that was in another country, and besides, the wench is dead” – from The Jew of Malta by Christopher Marlowe

This is one of many works expanded from one of Brown’s shorter works (many of which, as a result, were only reprinted posthumously decades later) and it does show in terms of the small cast of characters and the fairly simple story. Mame is strangled shortly after Howie visits her, when she told him of a strange encounter with Jesus, a Mexican tourist, who bolted out of her fire escape not long after arriving when he heard a knock at her door. Jesus is also killed shortly afterwards and Howie surmises that there must be a drug angle linking the two – but he then becomes a suspect when he is identified as being the last person to see her before the murder. Billie helps him elude the police while he ultimately finds the killer in an 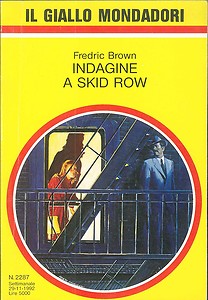 almost cursory, utterly coincidental way. If this sounds like I’m getting ready to criticise the book I’m not, because what makes it stand out has little to do with the story. Instead what we are offered is a dark but fascinating depiction of the Los Angeles slums. Brown was a fine craftsman and this is well in evidence in the way that he leads the reader, slowly, surely and inexorably towards a bleak and very Noir conclusion, albeit one that is none the less presented effectively as a transcendent moment of self-knowledge. There are not too many mysteries you can say that about and this one as such, so as hard as it may be to track down nowadays, it really is well-worth the effort.

Jeff Pierce wrote a terrific piece on this book for his Killer Covers of the Week blog which you can read here.