Posted on 4 August 2015 by Cavershamragu 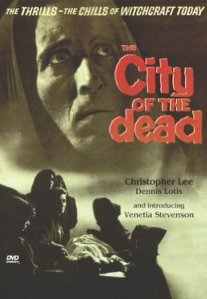 The late Sir Christopher Lee stars in this creepy chiller from the pen of Fedora favourite, George Baxt. Although a story of the occult, it is much subtler than the woeful US title, Horror Hotel, might suggest. Indeed, I think it bares comparison with its better-known contemporaries like Hitchcock’s Psycho and Bava’s Black Sunday (all released in 1960) while also looking forward to Lee’s later classic, The Wicker Man. Like that film, this is a movie that feels scarily plausible, a modern day story of people who still believe in ancient supernatural forces.

This review is offered for Todd Mason’s Tuesday’s Overlooked Film meme over at Sweet Freedom.

Set in New England (but shot entirely on the large sound stages at Shepperton Studios in the UK), we open with a 17th century prologue that sees the burning at the stake of a woman (Patricia Jessel) accused of witchcraft by a group of Puritan zealots in the Massachusetts town of Whitewood. In a nice touch, she doesn’t in fact repudiate this but curses the village and then calls on Satan to save her if she promises to do his bidding for ever more. Which is to say that, from their point of view, the mob is in fact completely justified! This is the same opening we will see in Bava’s Black Sunday, and both of these films will then move forward in time and see the witch re-incarnated. There the similarities largely end as the plots diverge with City of the Dead somewhat surprisingly coming very close to Psycho instead. In the present day we follow a blonde woman (Venetia Stevenson) head on a car trip and stop at a small hotel. There she discovers that something rather strange is going on and decides to investigate. When she and her car go missing, her sibling and boyfriend head out in search of the missing woman and discover a dark secret in the basement of the hotel and the remains of a very old lady.

City of the Dead was shot more or less at the same time as Psycho (and was in fact released earlier), so there is no question of the Hitchcock movie having been ripped off, though of course the original Robert Bloch novel preceded both of them. There are similarities, but they are I believe mostly incidental. What impresses here is the fine fog-filled atmosphere (beautifully shot by the great Desmond Dickinson, who lensed Olivier’s Hamlet), its general understatement and its subtle ratcheting up of suspense leading to several shocking moments (which it would be wrong to reveal). Patricia Jessel is especially good in the dual role of the witch and the hotel proprietor, while Lee is great as the stuffy professor who hides a terrible secret. For a low-budget little chiller, this film still packs a punch thanks to Moxey’s inventive direction, a committed cast that plays the story completely straight, a really shocking twist a half hour in and several well executed shocks, all leading to a surprisingly kinetic finale. I’ve deliberately kept this review short as I wanted to just wanted to provide enough to tantalise and make you seek it out. It’s a terrific thriller with supernatural elements, punching way above its weight – a true forgotten classic. Don’t miss it. 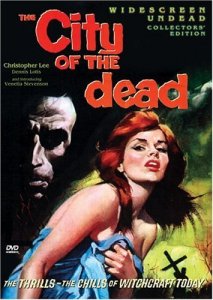 DVD Availability: A superb special edition was released ages ago by VCI featuring a superb uncut print (of the British edition) with tons of extras including two audio commentaries, one featuring Lee, the other Moxey, both of whom also appear, along with Stevenson, in individual career retrospective video interviews that combined last about 80 minutes. It is also available to view online all over the internet.