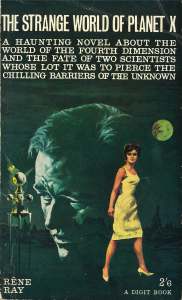 And now for a change of pace here at Fedora, featuring a novel by Irene Creese (1911-1993), better known as actress Rène Ray, who later became Countess of Midleton after marrying her longtime partner, George St John Brodrick, 2nd Earl of Midleton (1888-1979). Originally written as a TV serial, Planet X was later published as a novel, coinciding with the release of the movie adaptation (which was released in the US under various guises including, The Cosmic Monsters). It tells the story of a woman and two scientists …

“It looks like a sort of heavenly telephone box!” Fenella laughed. “The sort you might ring up God in.”

I am always fascinated by genre hybridity, whether it be conscious or otherwise, though of course sometimes it is less to serve the story and more to satisfy marketplace requirements. With a title like this, this could only be seen as science fiction, but for the most part, it is really a fairly straightforward crime story. The basic setup has strong similarities to Four-Sided Triangle (which I reviewed here) with two scientists loving the same woman and their invention, a dematerialisation box, driving a wedge between them, leading to death and destruction.

David Graham has been working with Gavin Laird on a formula, named M.F.X., that could harness magnetic fields and potentially provide a transport mechanism to the fourth dimension and which could be weaponised too (though we don’t quite know how). In one charmingly over-the-top scene, David panics about its implications and talks to his old university professor about it:

“Listen to me carefully, Professor” David said. “It is something of globular importance – not just national – Can you see what I’m getting at?

How’s that for emphasis – globular? That probably should be global, but … As the two men get nearer to their goal, it becomes clear that Laird is a bit of a psychopath who even used to torture his pets as a kid … and who has no compunction about zapping dozens of furry creatures to reach his goal of reaching Planet X – how long will it be before he puts a human in the cabinet? Not long as it turns out, trying it out briefly on his wife, who thinks it was all a dream after passing out in the cabinet. Laird then takes things much further when he finds an accommodating lady of the night – matters are then made even worse when David declares his love to Fenella, Laird’s wife, and is found out. Laird, having got the device to work without David’s assistance and having already stranded one inconvenient person on Planet X does the same to David after bludgeoning him – and plans to do the same to Fenella …

“You agree, Professor, that formula M.F.X. must be destroyed?”
“Of course” Schertz spoke vehemently. “It is not the only piece of unholy knowledge that man has stumbled upon …”

There is a charming naïveté about the book, which makes science work pretty much by magic and which, in one delirious moment, has David decide that the only way out is to go right to the top – so he takes a taxi to 10 Downing Street, knocks on the front door and is allowed in to talk to a secretary about some facetime with the Prime Minister (!) The book does a good job of describing Planet X in very dreamlike terms and comes up with an ending that did, to a large degree, surprise me, which was very welcome. The original TV serial was aimed at teenagers one would assume – it was broadcast in 1956 on ATV in the Midlands between 15 September and 27 October but not all episode titles are known:

In 1957 a film version was released, though the adaptation by Paul Ryder under the same title (but also known as Cosmic Monsters, The Crawling Terror, The Strange World, The Cosmic Monster and The Crawling Horror) only takes the basic premise and character names. While Ray does have characters go to Planet X (and in describing the alien landscape provides the most successful part of the book), the movie has all manner of aliens and giant insects arrive here instead – and even a flying saucer makes an appearance for what eventually turns into a rip-off from The Day The Earth Stood Still with an alien coming to earth to warn humans not to meddle with dangerous things they don’t yet understand. The special effects are woeful but the cast isn’t bad, most notably Martin Benson, as the equivalent to the Michael Rennie role from Stood Still, and a really nice cameo from TV comedy giant, Dandy Nicholls.

DVD Availability: This film is pretty easy to find on DVD and online – for instance …

I submit this review for Bev’s 2015 Golden Age Vintage Mystery Challenge bingo in the ‘borrow’ category as this was lent to me by my good chum Josephine: