Posted on 30 January 2015 by Cavershamragu

A belated Fedora welcome to 2015 after a fantastic Aussie sojourn. This year we open with a double bill from Elisabeth Sanxay Holding (1889-1955) that has just been republished by Stark House Press. In both novels, their respective protagonists certainly have their work cut out for them: The Obstinate Murderer is a ‘country house’ style mystery about a spate of poisonings; while Speak of the Devil is set in a tropical island hotel where some say Old Nick himself walks the corridors!

I offer the following reviews as part of Bev’s 2015 Vintage Mystery Challenge; and Friday’s Forgotten Books meme hosted today by BV Lawson at In Reference to Murder.

“There was nothing to do but wait, and to hope that the mad violence could find no crevice by which to enter, no weakness in this brave, new building, standing stark and alone by the sea.” – Speak of the Devil

It is not until we are about half-way through the book that we learn the first name of the heroine of Speak of the Devil, which is pretty fitting as Karen Peterson gives nothing away and proves to be a very hard nut to crack. She is on a cruise ship heading for Havana to start a new job, but gets a better offer from Fernandez, the rather too charming owner of a fancy new hotel on the island of Riquezas. She refuses to marry him, but accepts the position of hostess at the new establishment. She learns that she is a replacement for Cecily, another young American who was a bit too intense for the job but refuses to leave and has been demoted. Not long after the two women meet, Cecily says that she shot a man in Fernandez’ room, though the body proves elusive.

“Death in the house, mistress” he said. “Devil come to fetch he own.”

When a tropical storm hits, the natives claim that Satan is stalking the establishment, while Mrs Fish tells Karen that she is hunting the murderer of her husband, who in a photo proves to have a decidedly Satanic look. The locals are depicted in slightly stereotypical scaredy-cat fashion during the storm, though the chief of police chides Karen for imagining that there is no proper legal system in force, showing that Holding was aware of the pitfalls of caricature. The characterisation in fact is generally strong and often surprising here, providing some nice shading to what might otherwise have seemed like some rather stock characters. Karen is a very hardboiled dame but remains sympathetic while we discover many extra wrinkles to the rest of the cast. There are several murders before a rather nicely hidden villain emerges from the shadows and a highly dramatic finish that has plenty of suspense. All in all then what we have here is a pretty tasty mystery that, along with its busy plot, offers one of Holding’s typically tough and resourceful heroines, helping to elevate this excursion into tropical mayhem well above what you might expect. This is also true of The Obstinate Murderer, which once again offers a complicated plot to match some densely layered personalities.

“To meet up with a really subtle murderer, to study him, catch-up with him, step by step … There can’t be any other experience in life to equal a man-hunt.” – The Obstinate Murderer

A typical Agatha Christie scenario – a series of poisonings within a small village with suspicion falling on an illegitimate heir – is very nicely shaken up in The Obstinate Murderer. The somewhat reluctant amateur sleuth is Arthur Van Cleef, a wealthy and always impeccably turned out member of the upper crust so laid low by feelings of inadequacy, loneliness and general existential malaise that he has taken to the bottle. He is idolised by Russell Blackman, an obnoxious 18-year-old with a sharp mind and an unerring habit of making everyone hate him, who thinks it might be rather grand to be a detective. He also has a bit of a Nietzschean complex, which gives one passage an extra kick given that this book came out when Hitler was in the ascendancy in Europe:

“Superior men are becoming fewer, and they’ll have to become more ruthless” 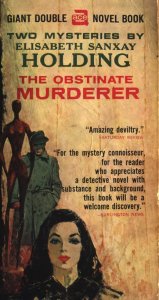 Blackman drives Van Cleef to his friend Emilia’s boarding house after she insists he come, claiming that she is being blackmailed by a young woman who recently arrived in the village. Could this have something to do with the strange death of her husband two years earlier? And why has the girl’s father been prowling around the house at night? There are several attempted poisonings, with death only averted thanks to Blackman’s ministrations, before a death occurs and Van Cleef is finally forced to act. There is a terrific scene in which he is himself poisoned but everyone believes that he is merely drunk. Only Blackman knows the truth and saves his life, but Van Cleef has to start facing the hard truth about how he has been wasting his existence.

Van Cleef and Blackman make for a fascinating double act – the former withdrawn and indolent, the latter truly insufferable and supercilious. In many ways these two feel like two halves of a Philo Vance style detective – Van Cleef has the aristocratic demeanour and impeccable manners while Blackman is ruled only by cold logic and is utterly infuriating. It is to Holding’s credit, as ever, that for all the clever circumlocutions of the plot, it’s the fleshing out of the characters that makes the book truly memorable. Curtis Evans reviewed the novel over at his blog, The Passing Tramp and rightly pointed to its homosexual subtext as one of its most fascinating characteristics. The world-weary Van Cleef, in particular, is a compellingly broken protagonist, one who would much rather climb into a bottle than investigate the poisonings that Blackman has clearly uncovered, but who still has a nagging sense that he should be doing more:

“I want to be left alone …” he thought irritably. “I can’t turn sleuth at this time of life.”

This fine edition comes with a brand new intro by Ed Gorman and also includes a very welcome checklist of not just all of Holding’s novels but also her extensive shorter fiction too (which included several stories published in The Magazine of Science Fiction and Fantasy). This is another great double bill from Stark House Press, who supplied the review copy and for which many thanks – it’s a keeper.

I submit these two reviews for Bev’s 2015 Golden Age Vintage Mystery Challenge bingo – Speak of the Devil in the ‘out of the UK and US ’ category and The Obstinate Murderer in the ‘amateur detective’ tile: 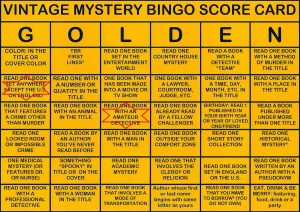