Posted on 22 February 2013 by Cavershamragu 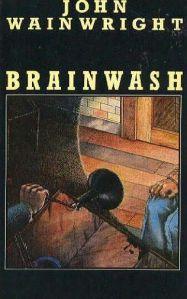 This claustrophobic psychological whodunit was one of over 80 books by John William Wainwright (1921-1995), a crime writer from Leeds who despite his prolific output seems in danger of being forgotten  – at present in fact none of his books appear to be in print in the UK. Brainwash describes, in exacting detail, the attempt to gain a confession from a suspect in a case involving three particularly grisly murders. It is a powerful and well-designed story, one that in its depiction of policemen and their (sometimes brutal) methods has the tang of authenticity – which is not a surprise as Wainwright was a police officer in the West Riding Constabulary for twenty-two years before turning to full-time writing at the end of the 1960s.

I offer the following review as part of the 2013 Book to Movie Challenge at the Doing Dewey blog – for links to other participants’ reviews, click here. I also submit it as part of Patti Abbott’s Friday’s Forgotten Books meme at her Pattinase blog and you should head over there to see the many other fascinating titles that have been selected.

“The room. We must start by describing the room because in effect the room was the stage upon which the whole drama was performed.”

Wainwright was a big fan of the 87th Precinct mysteries of Ed McBain and in the same vein sought to ring the changes in the British police procedural genre but without dispensing with a range of series characters who would be moved centre stage and then back again as required. This book was the first of five volumes to foreground Inspector Lyle, a hardened but intelligent veteran and provides a strong launching pad as he is one of only four main characters. The most prominent of the other three is prime suspect George Barker, a minor civil servant in local government, one of that army of small, grey, seemingly insignificant petit bourgeois so beloved of Simenon (who was a fan of Wainwright’s All on a Summer’s Day incidentally).

He was a timid mouse of a man, a man crushed into everlasting submission by … something.

Outwardly a paragon of respectability, small virtues and dull conformity, Barker is none the less a man with a guilty secret. He called the police after discovering the dead body of a young girl while out walking his neighbour’s dog, the latest in as series of three cases in which local girls have been sexually assaulted and then strangled. But the police feel he is holding something back – and what is more, Barker was never that far away from the scene of the other crimes either. The other two main characters are Bell, Lyle’s violent sergeant, and Barker’s chilly wife, Edwina, who has her own ideas about who the guilty party is.

“I tell you, Inspector. Were I capable of murder, she’s the one I’d kill”

The basic premise is highly theatrical – in essence what we have is a four hander made up of the suspect and his wife and two policemen, though hovering above these are the constant emotive reminders of three murdered girls, Lyle constantly bringing the victims back into the investigation. The novel charts the interrogation of the suspect over just a few hours, from 10.30 at night until about 8 hours later, a specificity of time and place also to be found in perhaps Wainwright’s best and best-known novel, the aforementioned All on a Summer’s Day.

The plot – the relentless police interrogation of a suspect – is not especially original of course and was used by Julian Symons to stark effect in his 1957 novel The Colour of Murder (see the excellent review at Past Offences) as well as by John Hopkins for his 1968 stage play ‘This Story of Yours’ (filmed as The Offence with Sean Connery in 1971 and reviewed by Ben Pearson here). And Ed McBain (of course) also used the formula, in his great 1975 novel, Blood Relatives.

The trick is to get the suspect to admit at least the possibility of his guilt. To con him. To carefully channel his answers until he is prepared to step aside from himself, make-believe that he is a third party and agree that, as this non-existent third party, he might be guilty.

Barker is brought in ostensibly to clear up a few loose ends relating to his previous statement about the discovery of the body and is thus not represented by a lawyer. Quite quickly though it becomes clear that Barker has gone from being a witness to being the object of the investigation – and yet he refuses counsel so we have to ask ourselves, why? Is it possible that he not only has something terrible to hide but does, in fact, want it to be uncovered? Bit by bit Lyle intends to break down Barker’s defences and get the all-important confession. His progress is interrupted by the arrival of Edwina, who it turns out has a pretty low opinion of her husband but is still furious that the police have not informed her that he is being questioned.

“No police station is ever a happy place”

As Lyle listens to her in another room, Bell decides that the progress is much too slow and assaults Barker, determined to beat a confession out of him. This is brutal but horribly plausible, as is the outcome when the assault is discovered: Bell is protected by his colleagues and Barker tricked into not pressing charges. Lyle is more frustrated by Bell’s interruption of his interrogation than appalled by the abuse of power – which of course is undoubtedly a plausible depiction. At regular intervals Wainwright takes us into the minds of the four protagonists, which initially feels a bit like padding (it’s still a short novel, under 200 pages) but is also useful because it turns out that he has devious reasons for doing this. Wainwright has some deep and dark secrets to be uncovered and also a very big and nasty twist in the tail.

“His early books are now almost period pieces, but the overall body of work is probably the substantial set of police procedurals in Britain” – Mike Ashley

If truth be told, given the limited nature of the premise, the book is probably a little bit repetitious, though again one could argue that this is probably fairly realistic in reflecting the to and fro of an intense one-on-one investigation. Wainwright is certainly very capable in combining a tricky plot, plausible characters and sordid details. His depiction of the marital breakdown of Barker and his wife is inevitably dated with its emphasis on her ‘withholding of marital favours’ and what impact this may have had on the accused – having said that, that this was a common point of view at the time is something I don’t doubt. I should also point out that the author, while mostly dodging strong language and any violence other than the one instance already described, is quite matter of fact in detailing what might motivate the killer and some of this material I definitely found queasy making, which was doubtless the point. Brainwash may not be Wainwright’s very best book but it probably has fair claim to be being his best-known given that it has been adapted several times: twice for the cinema, once for 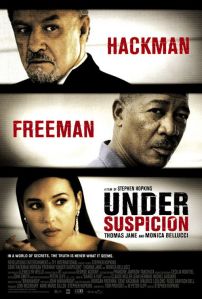 BBC radio and most recently as a stage adaptation in Florida – here’s a chronological summary:

I have not heard the radio version nor seen the stage production but am acquainted with the film adaptations at least. The first (and best) version, Garde à vue (1981), was made very shortly after the original publication and starred Lino Ventura, Michel Serrault and the luminous Romy Schneider, transposing the action to Normandy and I’ll be reviewing it here very shortly. The second, Under Suspicion (2000), was a glossy Hollywood remake based on both the earlier screenplay and the original book, and starred Morgan Freeman, Gene Hackman and Monica Bellucci in the equivalent roles with the action relocated to Puerto Rico and was barely released in cinemas. It is much more easily available on DVD and is certainly well made and worth a look, if clearly inferior to the original.

Wainwright said of his own aspirations:

“Of necessity I take my work seriously, but I never take myself seriously. I am a teller of tales. Nothing more.”

I think he most definitely accomplishes this in Brainwash so if you can get a copy I gladly recommend it, though you may need a strong stomach. For a detailed and mostly reliable bibliography (perhaps not 100% reliable though as the Brainwash publication date for instance is out by 3 years but then, given the sheer bulk Wainwright’s output and lack of availability, the level of detail is still pretty darn impressive), visit Nico van Embden’s fine Crime & Mystery website here. I hope this review might inspire others to track down second-hand copies of Wainwright’s books, which can only be a good thing. A review of his magnum opus, All on a Summer’s Day (1981), is to follow soon.

32 Responses to BRAINWASH (1979) by John Wainwright