Posted on 13 November 2012 by Cavershamragu

Something of a forgotten semi Noir, this mixture of comedy and thrills marked the RKO debuts of director Anthony Mann and Jane Greer (here billed with her full name, ‘Bettejane’). The leading man is Tom Conway, already established at the studio thanks to notably dark performances in such distinctive Val Lewton chillers as Cat People (1942), I Walked with a Zombie (1943) and The Seventh Victim (1943). Here he plays an amnesiac trying to figure out whether he is or is not responsible for a murder. Unlike the sombre Lewton films, the tone is light and convivial, more in tune with the silky smooth persona Conway projected in his long-running Falcon series as the unflappable amateur sleuth.

“What city are we in?”
“You don’t know what city we’re in? Wait until the Chamber of Commerce hears about this!”

This film is based on the Depression-era novel of the same name by Gelett Burgess (Richard Lupoff reprinted it with a new introduction for Ramble House in 2009 and I’ll be reviewing it here soon), which had already been filmed by the studio in 1936 as Two in the Dark (directed incidentally by Ben Stoloff, the producer of this remake). This version opens impeccably with a black screen out of which walks a stumbling shape. He staggers towards a street sign, then sags – all shot in one continuous take, the camera then tracks up to see the top of the street sign, the corner of Ocean View and Arch Street, before tracking back down again – we now see that the man (Conway) is bleeding from the side of his head. He steps out into the street and we cut for the first time as he is almost run over by a cab.

Cue the entrance of Ann Rutherford as Polly, the bubbly cab driver (think of Betty Garrett in On the Town and then lower the caffeine level down a notch and you’re there). The driver is initially unimpressed and takes him for a drunk but quickly realises that the man has been hurt. He can’t remember his name or anything else – all he knows is that his hat has the initials RD (or DR) on it, he has two stubs from a Broadway show, $500 in cash and a matchbook from the Blue Room at the Regency Hotel. They head to the police station, but learn from a newseller outside that Robert Dilling (i.e with the same two initials as Conway’s hat) was killed in the spot where Conway was found bleeding – and that $500 was taken. The police have put out a bulletin for Dave Rennick (those two initials again), Dilling’s chauffeur who matches Conway’s general description, including his pinstripe suit. Polly has taken a shine to her bewildered passenger, and doesn’t think he looks like a driver (and she should know), so she helps him get a new suit and then goes to visit the home of Rennick. 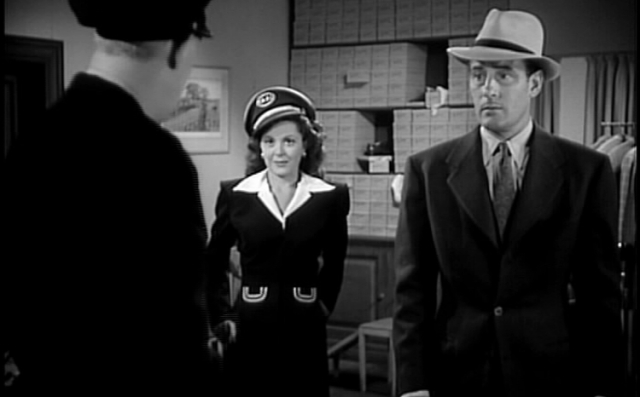 It turns out that Dilling, the producer of the Broadway play ‘Menace’, had been taking half of the author’s share of the profits. Conway also finds the manuscript of another play, Two O’Clock Courage by Lawrence Tenny but doesn’t get a chance to look at it. By this point Conway and Rutherford are masquerading as Mr and Mrs Clarence Smith to steer clear of a double act made up of hardboiled reporter Haley (Richard Lane) and Emory Parnell’s surprisingly amiable police detective (the two are even on a first name basis). All these scenes are played strictly for laughs, the tone remaining chucklesome for the nest 20 minutes or so as Conway and Rutherford try to clear his name (and find it too). Rutherford gets into a slinky nightgown, outfoxes her nosy landlady and accompanies Conway to the Regency Hotel where he meets several friends of his. Thus we learn that our hero is actually named Theodore ‘Step’ Allison, is an old school friend of Mark Evans, author of ‘Menace’ and is fairly cosy with Helen Carter (Greer), who immediately becomes jealous of Polly. Mark and Step used to know Lawrence Tenny, who apparently committed suicide not long before. Mark then gets into a fight with Maitland, the boyfriend of Barbara Borden (Jean Brooks), star of ‘Menace’. Greer is great in these scenes in full-fledged sultry mode though her inexperience shows later on when she is called to play a sloppy sentimental drunk and is much too broad. 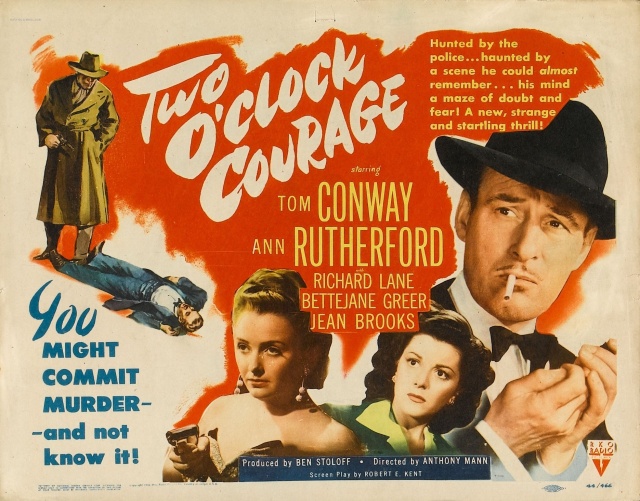 The police however are closing in on Step once Barbara tells the police that he had an appointment with Dilling the night of the murder. ‘Step’ goes back to the scene of the crime for a highly atmospheric sequence, the first that really ties stylistically with the impressive opening of the film. He enters the house at night through a window with only a flashlight to see by and finds Tenny’s manuscript for the play ‘Two O’Clock Courage’ – but he is being observed and is shot. The MS is take while he lies unconscious – the bullet having grazed him. Predictably, this shock to our hero’s head leads to a flashback that brings back his memory. This is again very nicely staged by Mann with an extreme close-up that then actually goes in even further as we see what Step was up to and how he was bashed on the head the first time. We are now set up for the finale though the script goes to the trouble of  nice double bluff with the guilty party apparently committing suicide only for this to turn out to be another murder leading to a brief but again modestly atmospheric shootout in the darkness.

We then return to lightness and Rutherford for a comedy finale – it is very noticeable how the tone shifts between the light and breezy moments with Rutherford and the darker sequences featuring only Conway. He is certainly less happy in the overtly comedic moments, especially towards the end when he finally gets arrested for murder and has to convince the police of his innocence – but on the whole  Conway makes for an agreeable hero while Rutherford, like all the three of the leading ladies, looks a peach in a knockout evening dress and pushes with boundless energy. Of the three main actresses, it is Greer who probably comes off the weakest and certainly her drunken appearance in the finale is pretty amateurish – she would improve greatly and very quickly by the time she was paired again with Conway the following year in The Falcon’s Alibi. The film itself is a curious but ultimately winning combination of elements – a great little B-move that at 69 minutes never outstays its welcome

DVD Availability: Not currently on DVD in the US, the French Editions Montparnasse release, as recommended to me by Colin of the ever-well-informed Riding the High Country blog, proves to be of better than average picture quality and with removable subtitles too. If you click on the company link you can watch the opening sequence and see what I mean about the quality of the DVD. A DVD is also available in Spain.

This entry was posted in Film Noir, New York, Noir on Tuesday, Scene of the crime, Tuesday's Overlooked Film. Bookmark the permalink.