Posted on 10 August 2012 by Cavershamragu 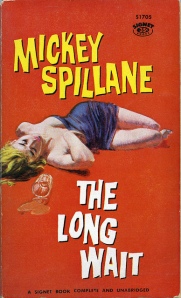 Well, I suppose it had to happen sooner or later at Fedora! After a year and a half of blogging it is time to confront some potentially ingrained snobbery and decided if we have descended to the level of Mickey Spillane, or risen to it … An author that still divides fans and critics alike (and whose body of work continues to grow posthumously thanks to the ex-post-facto collaborative efforts of Max Allan Collins), the arrival of Mike Hammer in 1947 launched a new type of hardboiled hero, one driven by a lust for revenge, an appetite for extreme violence and a complete disregard for the niceties of law and order. This is very much the era of the post-war Noir anti-hero, one shaped by the horrors of war and a return to a home very different from the one left behind.

I offer the following review as part of the Alphabet of Crime community meme over at the Mysteries in Paradise blog which this week reaches the letter L. My contribution is also

eligible under the guidelines of  Bev’s 2012 Vintage Mystery Readers Challenge for which I have selected to read and review at least eight mystery novels on the theme of amnesia published pre-1960 and Friday’s Forgotten Books meme hosted this week by Todd Mason over at his Sweet Freedom blog. Phew! So, onwards, the book …

“Just for kicks I reached out, grabbed him by the arms and threw him all the way across the room”

First things first – this book does not feature Mike Hammer, the author’s controversial punch-in-the-face-first and ask-question-later protagonist. Instead we have a different man, albeit one who physically, ethically and psychologically certainly resembles him very closely – which should come as no surprise as all Spillane’s ‘heroes’ were made in his own rugged, crew cut image (see the photo below, courtesy of Wikipedia). So, why did Spillane change the lead character? Well, that’s a good question and the reason is that we are not 100% sure who he is –  as a matter of fact, he isn’t too sure either … Our narrator arrives at a den of iniquity known as Lyncastle on the bus and right away is given a very poor reception. An old man at the station recognises him as Johnny McBride and pleads with him to run; then a policeman tells him to get clean out of town as they don’t like strangers (which is odd considering alcohol and 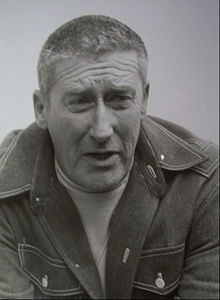 gambling appear to be its main source of income). The next morning, bright and early, he gets picked up by the cops, who immediately beat the hell out of him and try to arrest him for murder. It seems that six years earlier the local DA was found dead in his office and Johnny had a motive as he was about to be arrested for stealing $200,000 from the bank where he worked. To cap it all, the man was shot with a gun covered in Johnny’s fingerprints. Things are certainly looking bad but our protagonist has a unique solution to his current dilemma – he no longer has fingerprints! This really, really annoys Captain Lindsey, who is on a crusade to crucify Johnny. But that’s OK, because Johnny has a mission all his own.

Johnny is the proverbial bull in a china shop, creating violent disorder wherever he goes, chain-smoking an endless supply of ‘butts’, drinking prodigious quantities of coffee and alcohol, bedding an unseemly number of shapely women (they all just throw themselves at him without hesitation) while getting shot at, run off the road and generally beaten to a pulp, just to see what he can shake loose from the tree. The basic premise is taken from Hammett’s classic bad town novel, Red Harvest, while Johnny’s pursuit of the long-lost Vera, who also worked at the bank and maybe framed our man, apes Moose Malloy’s pursuit of the equally absent and similarly named Velma from Chandler’s Farewell, My Lovely. But Johnny is not too bright, certainly not in the same league as the Continental Op or Marlowe. For instance,

“Someplace I had read about twins, how there was thought transference. Maybe it happened to people who look alike too.”

This less than scientific bit of pseudo thought stems from the book’s outlandish new wrinkle. In the accident where he had his fingerprints burned off, he not only also lost his memory but also met his doppelgänger, Johnny McBride. So who is the narrator? So far he has not been able to find out anything about himself, other than a name: George Wilson. As if this weren’t a heady enough plot development, he discovered that not only 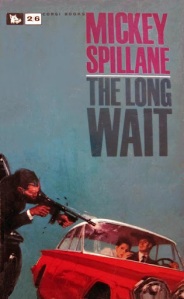 was he a dead ringer for another man, but that his best new friend, accused of murder, was run out of Lyncastle 6 years earlier. After his friend dies while saving his life, George/Johnny decides to clear his name, discover out who framed him, exact revenge and maybe even find out his own real identity! The best way to do it seems to involve punching as many people as possible before the police manage to make their accusations stick. He discovers that 6 years earlier local kingpin Lenny Servo was going around with Vera so decides that they must be the ones responsible for all his troubles. Time for some more violence described in graphic detail – indeed, I really did lose count of the number of beating and coshing the narrator dishes out and absorbs.

“I had time to see him vomit all over himself before my own head burst open in a blaze of fiery streaks that sent a curse of ungodly pain down into every single little nerve fibre throughout my body and I knew that this was what it was like to die.” 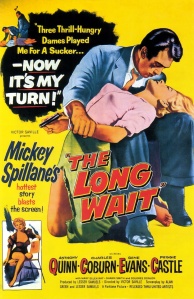 The book is utterly preposterous with a hero so tough that literally he just has to stare at baddies to make them faint (he actually does this twice). In its appeal to all the atavistic appetites associated with pulp fiction, with women who all prove to be either strippers, prostitutes, brain-dead blondes or combinations of all three and various narrative gimmicks that are repeated over and over, it becomes easy to see that Spillane got his start in comic strips, especially in its very functional prose. Even the best that William L. DeAndrea could say of the author’s style, and he was a fan, was that he manged to master his subjunctives, which really isn’t saying a hell of a lot. Bill Crider, who definitely knows a thing or three about mystery writing, suggested in 1001 Midnights (republished here) that this book is not meant to be taken too seriously. This certainly helps in one’s enjoyment, though personally I think Crider is giving Spillane a bit too much credit as there is little to differentiate this from the equally thuggish and dunderhead Hammer books of the era. They made fairly decent movie fodder though and The Long Wait was filmed in 1954 by Victor Saville, the British producer who bought the rights to several of Spillane novels. Apart from actually directing this adaptation, that stars Anthony Quinn, his other Spillane productions included the 3-D version of I, The Jury (1953), the Noir classic Kiss Me Deadly (1955), My Gun is Quick (1957) and the pilot for the TV show Mickey Spillane’s Mike Hammer (1954) starring Brian Keith, which never went to series.

So what did we make of this? Well, I’ve given it 2 stars. One because in its own vulgar way it certainly works within the confines of the tough guy genre – and because the amnesia plot is actually decently worked out, if based on a postulate that is utterly ridiculous. And the other star is for an outrageous final ‘clue’ literally revealed during a striptease-at-gunpoint finale that, as Crider points out, refashions the same ending from I, the Jury.  Here though it is used to deliver a what, in its own scabrous way, is something of a first in detective fiction. Intriguingly, this is a first not a million miles away from Sayer’s slightly naughty (and initially censored) use of a common physical attribute in her 1923 whodunit, Whose Body? That’s pretty decent company to be in actually, even if one imagines that the glee with which this was met by the adolescent youths it was aimed at would not have met with Sayers’ approval. Also not a bad thing perhaps.