Posted on 4 March 2016 by Cavershamragu 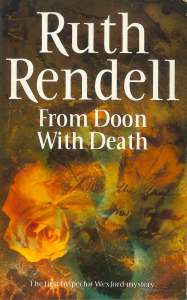 This short novel (my edition runs to 182 pages) marked the debut of Chief Inspector  Reg Wexford and Inspector Mike Burden, the two top cops of Kingsmarkham, a sleepy Sussex market town with more than its fair share of murderous episodes. Pious, poor and conventional Margaret Parsons goes missing and two days later her strangled body is found semi-hidden on farmland near w wood. Who would want to hurt someone so seemingly ineffectual? Could it be her milquetoast husband, or some one from her past?

“Normal ordinary wives as conventional as Mrs Parsons, wives who always have a small meal ready for their husbands on the dot of six, don’t suddenly go off without leaving a note.”

This confident debut is in many ways a very conventional whodunit – a woman goes missing and is found strangled. Her husband Ron is the natural suspect, as is Drury, an old boyfriend from the village, but these leads, after a few red herrings, peter out. Then in the attic of the victim’s home, the Inspector finds several books with loving messages from Doon, who seems to have known the victim in her youth and then re-entered her life recently and rather disagreeably.

“D’you know, I can hardly believe it. I should have said she was the last girl to get herself murdered.”

The police realise that ‘Doon’ was just a nickname and decide may very well have been an old lover who reconnected unsuccessfully with his old flame, leading to the strangling. Which of her old school friends can it be? The spoiled Helen Missal , who claims to have been near the murder spot but only the day after the crime, or the upper class solicitor Douglas Quadrant, who was with her at the time and is married to Fabia, another one of the victim’s school friends? And who dropped a match and an expensive lipstick (‘Arctic Sable’) near the body? The book follows this traditional path but to spring its surprise conclusion manages to introduce an exciting, and for its day, quite daring reversal, one that is crucial to the solution, so cannot be spoiled here (beware of the Wikipedia page incidentally, as it ruins this for all to see). Rendell’s distinctive voice – gloomy and somewhat misanthropic, is already very recognisable. For instance, here is her description of the home of the victim:

“The sun showed up the new dust and in its gentle light the house seemed no longer like the scene of a crime but just a shabby relic.”

My blogging buddy the Puzzle Doctor reviewed this one over at In Search of the Classic Mystery Novel and was more or less of the same mind as myself. I think this still works as a whodunit with a decent twist too – the protagonists will be fleshed out more in later volumes (Wexford’s wife Dora doesn’t even appear) but the ingenuity, the incisive precision of the writing and the often pitiless characterisation is all present and correct.

I submit this review for Bev’s Silver Vintage Scavenger Hunt in the ‘country scene’ cover category: