THE MAN IN LOWER TEN (1906) by Mary Roberts Rinehart

Posted on 14 August 2015 by Cavershamragu

This was the debut novel by Mary Roberts Rinehart (1876-1958), though it originally only appeared between hard covers the year after the success of The Circular Staircase (1908), which more or less popularised the spinster ‘Had I but Known’ style most often associated with the author (rightly or wrongly). In this book however the narrator is male, an unmarried thirty-year-old lawyer from Washington DC, who while transporting important documents runs into murder, mayhem – and love.

“Good God, that’s my man!” I said hoarsely, as the audience broke into applause.

One of the aspects I enjoyed the most was the section in chapter 15 in which Lawrence Blakeley, our narrator, visits a theatre and watches an early newsreel – and glimpses, possibly, the murderer. This must have been a very early use of the movies as evidence in fiction. Blakeley takes the train back from Pittsburgh carrying with him vital evidence in a forgery case. That night he finds a man sleeping in his berth so takes another. That night the man is found dead, the precious legal documents are stolen and Blakely is accused of the crime – and just when things are looking really bad for him, they get much worse as the train crashes and most of the passengers are killed. There follows a strange sequence in which Blakeley, with a broken arm, manages to extricate himself thanks to a woman he has just met and with whom he quickly falls in love with as they walk towards a farm looking for shelter and food. The woman is Alison West, who just happens to be his law partner’s fiancée. But it turns out she is involved in the murder and may be protecting the actual murderer – and so Blakeley ends up on the run to find the killer, get back the documents and protect the honour of the woman he loves but who is actually engaged to his best friend.

And then I realized the thing that stayed with me for a month, the thing I can not think of even now without a shudder. The hand lay ice cold, strangely quiescent. Under my fingers, an artery was beating feebly. The wrist was as slender as—I held the hand to the light. Then I let it drop. 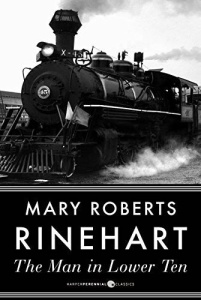 The pace is choppy and sluggish in places, betraying its roots in episodic serialised publication (in All-Story Magazine), though it certainly packs in lots and lots of incident (and coincidence). Who is Alison protecting? Who was the man seen jumping off the train in the newsreel? Who was the copper-haired woman on the train  and why does she want Blakely’s documents so badly? And who is creeping around in the supposedly empty house next door to Blakely, much to the consternation of his domineering housekeeper? All answers are eventually provided (though a bit hard to swallow) and I recommend Lower ten as an entertaining and exciting read. The book is available free on the net, including Project Gutenberg.

I submit this review for Bev’s 2015 Golden Age Vintage Mystery Challenge bingo in the ‘Eat, drink and be merry’ category for its focus on the parties the hero has to attend and the various carefully prepared meals that he keeps missing, much to his housekeeper’s disdain: 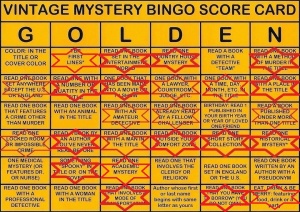 This entry was posted in 2015 Vintage Mystery Challenge. Bookmark the permalink.