Posted on 15 August 2014 by Cavershamragu 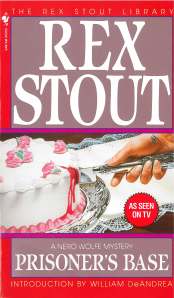 The late William L. De Andrea in his introduction to the Bantam edition (on the right) singles out this particular case for Nero Wolfe and his legman Archie Goodwin for having one of Rex Stout’s best plots. It also made for great television when adapted for the show starring Timothy Hutton and Maury Chaykin. It all begins when a stranger arrives at Wolfe’s brownstone looking for a place to stay …

I offer this review as part of Rich’s celebration of 1952 books over at Past Offences; Bev’s 2014 Vintage Golden Age Mystery Challenge; Patti Abbott’s Friday’s Forgotten Books meme over at her fab Pattinase blog; Katie’s Book to Movie Challenge at Doing Dewey (for reviews, click here).

The Goodwin / Wolfe bromance is in full swing in this novel, beginning with the two having a trivial argument, leading to Archie tearing his salary cheque in half. When a mysterious young  woman, refusing to give her name or explain her motives, asks for room and board until 30 June, Archie says yes initially, partly because he knows this will annoy Wolfe, which it duly does. But then a lawyer arrives while the woman is in a room upstairs and explains that he is looking for Jennifer Eads, heiress to the Softdown towel company who will inherit control of the company on the 30th, and will pay Wolfe $10,000 for her return before then. It seems he is concerned that she may had gone off to Venezuela to talk to her former husband, who has a document she signed agreeing to give him half of everything she owns. Wolfe dismisses him and tells Eads that either she pays the same sum to stay hidden or he will give her an 11-hour head start and then earn the same sum from the lawyer, which would still be her money of course. She balks and heads off into the night – and sadly gets herself killed, as does her maid who had a key to the apartment. Archie takes it hard, blaming himself, and so goes it alone with focussing his attentions on the maid’s husbans, Jennifer’s ex-husband, and the five heads of the company who will now inherit an equal share in the company.

“I can get along without omniscience, but I can’t get along with a goddam strangler going around being grateful to me for sending his victim to him”

This has so much memorable character stuff along with its great plot – Archie and Wolfe fall out, he goes off to investigate alone; when he gets arrested Wolfe, having suffered the indignity of being manhandled and taken down to the police station, takes Archie on as a client; Archie falls for Sarah Jaffe, the delightfully scatterbrained widow of a Korean vet and helps her get over her grief; and because when a third death occurs while Archie was talking on the phone to the victim at the time, he joins the cops as a consultant to crack the case. But of course it is Wolfe, having gathered all the suspects together, who finally finds the ultimately simple but elegant solution to all three murders.

“What’s that noise you are making?”
“It’s something special,” I told him, “and takes a lot of practice. Don’t try it offhand. It’s a derisive chortle.”

This sees Stout and Wolfe at something like their postwar best and is truly a joy from start to finish. The TV version is almost as good, eliminating only one minor character entirely (the volatile husband of the maid) but is otherwise incredibly faithful, using nearly all the dialogue (and voice over) and sticking religiously to the narrative as it appears in the book – for fans it is hard to imagine this could have been done with any more love for its literary source and is splendid stuff throughout. Kari Matchett is perfect casting as Sarah Jaffe, and is one of the repertory of actors who appeared regularly throughout the show, usually in different roles every week (she plays Lily Rowan in some episodes in fact), an eccentric idea reminiscent of the stock company of actors employed in the Thin Man movies etc, but which is very unusual for modern TV – it works wonderfully well here, helping to sell the rarefied and artificial style to perfection.

The Goodwin-Wolfe interplay, as played by Timothy Hutton (who co-produced and in addition directed several episodes) and Maury Chaykin, is rendered very well and this first season, beautifully shot in eye-popping HD by Derek Rogers, makes for a great celebration of the world created by Stout, with a lovely big-band style score by Michael Small to help drive the stories along at a snappy pace – if you haven’t watched these, you really should.

DVD Availability: A&E released a decent but sadly panned and scanned version of the show several years ago – it has come out in some other territories since then, including Holland and Australia, but none in widescreen. However, the Australian release does present it in its 90-minute version (as opposed to two 45-minute episodes) with about 4 minutes of extra scenes.

I offer this review as part of Bev’s 2014 Vintage Golden Age Mystery Challenge in the ‘Detective team’ category: