Posted on 23 November 2012 by Cavershamragu

During the 1940s Cornell Woolrich was one of the true masters of the psychological suspense yarn, as adept at creating ingenious and outlandish plots as painting an atmosphere of universal dread and irrationality. This is a case in point with Nightmare, a 25,000-word novella first published in Argosy magazine in March 1941 with the title changed to ‘And So to Death’. Two years later it was re-printed under the author’s original title, though to confuse matters further it has on occasion appeared under the correct title but under the author’s ‘William Irish’ byline. The story is deceptively simple – a man has a frightening dream in which he kills someone. Then the dream apparently starts to come true …

I offer the following as part of my contribution to Bev’s 2012 Vintage Mystery Readers Challenge focusing on stories dealing with amnesia, a theme Woolrich touched on in several books. This Thanksgiving week the Friday’s Forgotten Books meme is being jointly hosted by Patti at Pattinase and Todd Mason over at his Sweet Freedom blog.

“Night was coming on, the time of dreams, the enemy”

Vince is 26, single and lives on his own in a cheap apartment. One morning he awakes after a vivid dream in which he was trapped in an octagonal mirrored room with many doors and attacked by a man and a woman. While the two men struggle she hands over something like a knife to her accomplice but Vince gets his hands on it first – and stabs the other man to death. He then props up the attacker in the cupboard behind one of the doors, using a long and peculiar old key while the woman escapes. Things become very weird when Vince gets ready for work and finds the same scratch on his wrist that he sustained during the attack in his dream. Plus he has clear marks round his neck where the man tried to strangle him – and to cap it all, the button that he pulled off the man’s jacket is now in his pocket, together with the long key too, neither of which he can remember having picked up and which he is sure don’t belong to him. Vince is understandably perturbed so he goes to see his 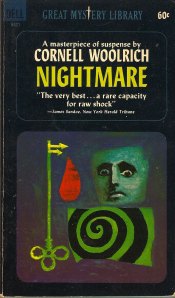 sister who is married to Cliff, a cop, who rejects any paranormal ideas and tries to keep things on a very prosaic level. Vince is panicking because since the key and button are real, then perhaps so was the murder … Is his unconscious trying to remind him of something he has blanked out – or is he cracking up? Maybe, just maybe, there is a third, darker and even nastier solution. He tries to find the octagonal room, without success but one Sunday while driving with Cliff he is drawn to a house he has never been to. He instinctively knows where to find the door key and where the lights to the house are – and he finally finds the mirrored room and the cupboard too. And inside … well, this is where the plot really kicks in and I’d hate spoil it.

“There was nothing the matter out there. It was in here, with me”

Nightmare is one of a number of Woolrich creations that his biographer Francis M. Nevins termed ‘living nightmare’ stories in which a protagonist awakens from a blackout unsure of what is real and what is not, haunted by the feeling they have done something terrible but unable to recall exactly what this is. Others examples of this type of narrative by the author include ‘You’ll Never See Me Again’ (1939), ‘Cocaine’ (aka ‘C-jag’) and ‘I Won’t Take a Minute’ (both from 1940) and ‘If the Shoe Fits’ (1943). Nightmare stands out as one of the best treatments of the theme thanks to a clever plot and Woolrich’s trademark ability to make fear of the irrational a palpable and terrifying reality, as he would in his great – perhaps greatest – novel, Night Has A 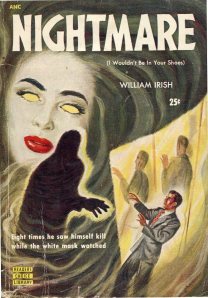 Thousand Eyes, which combines the rational with the supernatural to stunning effect. In the 40s and 50s Woolrich may have been one of the most ‘adapted’ of mystery authors, his work constantly in demand for film, radio and television, which is pretty amazing for someone who never really created a recurring series character and whose novels and stories of suspense are often remarkably dark and bleak. Practically all of his novels from those years were filmed shortly after their initial publication while dozens and dozens were transferred first to radio for such shows as Suspense and then later for TV anthologies like the Alfred Hitchcock Presents series (the famous director had made the classic Rear Window from a story by Woolrich).

“I went down in a sort of spiral, around and around, following my head and neck around as he sought to wrench them out of true wit my spinal column”

Nightmare was adapted twice for the cinema, both times by writer-director Maxwell Shane. The first (with story credit provided on screen to ‘William Irish’) was as Fear in the Night (1947) starring DeForest Kelley and Paul Kelly as the two bothers-in-law; and then as Nightmare (1956) with Kevin McCarthy and Edgard G. Robinson taking over the main roles, with Shane sometimes re-staging the earlier film’s scenes exactly shot for shot (the credit now given to Woolrich). The initial version has fallen into the Public Domain in the US and is easy to find online (the YouTube link is below). They both make for decent movies and are well worth watching though Nightmare currently only seems to be available in Spain on DVD.

This novella takes one of the author’s favourite situations and folds it around a distinctive plot to create a highly memorable work. It isn’t perfect – very occasionally Woolrich does give in to somewhat florid prose (what Julian Symons disdainfully called his ‘high pitched whine’) and the plot, while certainly imaginative, doesn’t bear up to close scrutiny, though this is a charge that can be leveled at most of Woolrich’s work. It is none the less a rich and rewarding piece of Noir and well worth tracking down (it’s been reprinted many, many times), not least for the developing relationship between the two male protagonists, which goes through several evolving permutations.

21 Responses to NIGHTMARE (1941) by Cornell Woolrich