A topical satire and a crackerjack suspense movie, this still stands up among the cream of 1970s crime movies, especially when compared with its two inferior remakes. The plot remains the same in all three versions: a New York subway train is hijacked and the passengers held to ransom. Part caper and part siege, the plot keeps you guessing as to whether the hostages will survive and how the villains think they can possible get away. The main difference is inflation: the original’s $1 million ransom became $5m for the 1998 TV-movie and reached $10m for the recent version starring John Travolta and Denzel Washington. But it’s the original starring Walter Matthau and Robert Shaw that remains the most successful.

“What do they expect for their lousy thirty-five cents? To live forever?”

The first thing you have to say about this thriller is that – like all three of the movies more or less with this title – it was adapted from the eponymous 1973 novel by John Godey. The second thing to say is that this original 1974 version, written by Peter Stone and directed by Joseph Sargent, is as much a comic spin on early 1970s America as it is a genre movie. Like Richard Lester’s Juggernaut from the same year (and to be reviewed here shortly), it takes  microcosm of society, has terrorists lock it off from the outside world, and then watches as things unravel, the clear implication being that this is representative of the malaise of the early 1970s, undermined by the Watergate scandal, the Vietnam War, the energy crisis and of course that comparatively new phenomenon – the hijack. Indeed, the one major thing this has in common with Juggernaut is the extent to which it masquerades as a disaster movie (they came out in the same year as The Towering Inferno, hot on the heels blockbusting success two years earlier of The Poseidon Adventure). They are however quite small and intimate by comparison, even though their satiric intent certainly brodens their appeal, especially nearly 40 years after the event.

Four men, all with glasses, moustaches and wearing hats, topcoat and carrying a cardboard box, board the southbound Lexington-Pelham subway. The four men all look-alike but can be distinguished by the different colours of their hats – and this is how they refer to themselves: in charge is the ultra precise Mr Blue (Robert Shaw), then there is the flu-ridden Mr Green (Martin Balsam), the stuttering Mr Brown (Earl Hindman, probably best known as Tim Allen’s unseen neighbour in Home Improvement) and the psychotic Mr Grey (Hector Elizondo in a horribly creepy performance a million miles away from his usual cuddly persona), a man so violent that even the mafia wouldn’t have him! If the colour coding seems familiar, that may be because that magpie talent Quentin Tarantino appropriated it for his own siege drama, Reservoir Dogs (1992). Like that film, though there is action and violence, it is also full of great characters and lots of quotable dialogue.

What’s really fascinating watching it again, is how compartmentalised it all is – in many ways it feels like three separate mini-movies glued together: the police investigation, the hostage drama, and the political backbiting over the decision, or not, by the mayor’s office on whether to pay – in many ways it shouldn’t work, and yet it does, and quite superbly too. It helps that, in its own low-key way, this a remarkably controlled film and is utterly convincing in its sense of location and detail, though in fact the control centre interiors were shot on soundstages while the train sequences were undertaken at Brooklyn’s Court Street Station, closed to the public since 1946. To help us understand the world we are in, Stone helpfully provides not one but two introductions to the two main centres of activity, opening with a new train conductor being given a quick exam on subway procedure and etiquette. This is handled with the garrulous and often profane humour that peppers the entire script, but which also leads to a nice irony when Mr Brown treats the conductor in the same way that his colleague did just a few minutes earlier, only now in completely different circumstances. When Mr Green uncouples the motor car from the rest and the train and then reverses, the conductor is simply amazed that the train can even go backwards!

“He’s got a heavy English accent, he could be a fruitcake.”

We then switch to the transit authority police offices, where Lieutenant Garber (Matthau) is giving the grand tour to the directors of the Tokyo subway, though he soon starts to make fun of them as they don’t seem to speak any English (this proves incorrect at the end of the scene, wryly dovetailing the moment when the realisation is just starting to sink in that something is really wrong with the train – which incidentally is named for its destination and departure time (1.23 in the afternoon). 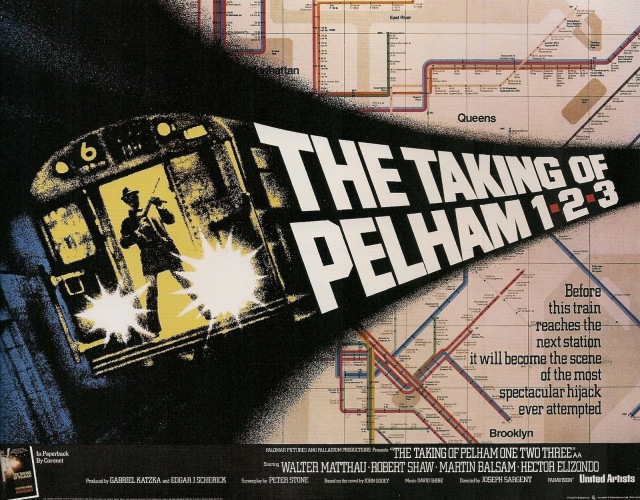 Garber doesn’t come out of it all that well, but then this is a film populated by a pretty crusty bunch of characters, typical New Yorkers seemingly unphased by almost anything – which makes the sudden explosions of violence all the more shocking when Mr Gray guns down a rotund and voluble character we assumed was just there for comic relief.

This is contrasted by the fairly hilarious scenes involving Al the Mayor (Lee Wallace, wonderful as the epitome of a self-serving and ineffectual bureaucrat), who like Mr Green is suffering from flu. He also isn’t doing very well in the polls (he’s trailing 22 points) but hassled by his deputy (Tony Roberts) he finally has to decide whether to pay the ransom – because Mr Blue has already drawn first blood and has given them only 1 hour to pay up. The decision is finally made by the mayor’s wife, played with her usual scene-stealing chutzpah by Doris Roberts, who is just as good here as she ever was in Remington Steele and as the mother-from-hell in Everybody Loves Raymond. But can the money be counted and delivered on time? This is where Garber proves his mettle, putting up with help and frustration from his colleagues (including a great if subdued performance from Jerry Stiller); and where Mr Blue shows himself to be as icy as his codename, refusing to budge from his timetable and executing a hostage as he warned he would.

As the police mobilise above and below, the hijackers never seem to put a foot wrong and yet we know that there is much we do not know – how can they possibly make their getaway? We learn that the train cannot be moved without a driver actually physically present, which means the men are trapped underground with passengers. In the meantime the police are getting itchy trigger finger and cause at least one death through a gun firing accidentally. Plus there is apparently a plain-clothes and armed copy amongst the hostages, though we don’t know who this is amongst a motley crew including a prostitute, a mother of two boys who are much more excited than scared and a drunk who sleeps through the whole thing. Will they all make it? Will the robbers make an escape? Can Garber stop them and figure out their seemingly impossible escape route? This is all very nicely worked out and cleverly plotted, and ends on a classic dolly into Matthau’s most hangdog expression, paying off a gag right from t he beginning of the movie.

Artfully constructed, beautifully shot for that authentic 70s grunge, this is a movie that moves beautifully and never takes a false step despite several switches in tone from comedy to tragedy – a very hard thing to pull off. And then – and then there’s the cherry on top … And to top it all, along with its great cast, sensational dialogue and cleverly worked out story, there is another unforgettable part of the whole –  that funky musical score by David Shire, pounding and relentless (and subsequently much sampled), with that instantly recognisable horn riff that remarkably mixes big band jazz with the ultimate in 12-tone modern serial music for a truly unforgettable effect. Just listen to the extracts on the YouTube clip below:

DVD Availability: Having originally bought it first on VHS in the early 80s, I am now the proud owner of this film on Laser Disc (remember those?), DVD and the new Blu-ray – each has seen a leap in the image quality, from the horrible pan and scan of the tape and the rather faded colours of LD and DVDs (which just used the same video master and to boot also lacked anamorphic enhancement), the most recent being by far the most impressive with solid image reproduction, decent sharpness, no obvious digital jiggery-pokery and a phenomenally high bitrate (and average or 35 mbit/s for those who care about these things such as megabits). No extras from the trailer, but this is more than good enough for a budget release.