DEATH ON THE AISLE (1942) by Frances and Richard Lockridge

Posted on 28 October 2011 by Cavershamragu 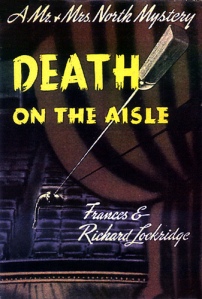 This is the fourth book in the long-running series featuring married sleuths Mr and Mrs North, written by husband-and-wife authors Richard and Frances Lockridge. The Jerry and Pam North characters first appeared in book form in a collection of lightly comedic short stories, Mr. and Mrs. North (1936), by Richard Lockridge alone and were not originally investigators or involved in crimes at all. This only changed when the characters were re-used for novels that Richard co-authored with his wife Frances Lockridge. Starting in 1940 with The Norths Meet Murder, the series would go on until 1963. Thus this pair of sleuths would prove far more long-lived than other married detectives like Dashiell Hammett’s Nick and Nora Charles, Patrick Quentin’s Peter and Iris Duluth and Kelley Roos’ Jeff and Haila Troy.

“There was a man dead in a seat in the West 45th Street Theatre, which was against regulations.”

Like the Duluths, the Norths also get involved in crimes set in New York’s bustling theatre scene and this time Pam and Jerry are at the final dress rehearsals for a new comedy entitled ‘Two in the Bush’ when the onstage histrionics are interrupted when the director finds the body of Dr Carney Bolton, celebrity playboy and physician (!), whiz financier and also the play’s highly unpopular and meddling backer. He is found back in the aisle with an ice pick through his neck, which proves particularly annoying for the North’s good friend Detective Lieutenant (Acting Captain) William Weigand, not just because it’s his day off but because he and his girlfriend Dorian were just about to head off and get married that afternoon and so are desperate to get away.

Seventy years ago today .. almost
Time is a prominent structural factor in this novel, which begins on the afternoon of 28 October 1941 (2:20 PM to be precise) and ends about twelve hours later in the early hours of Wednesday morning (2:45 AM), a tally of the exact minutes covered appearing at the head of each chapter. This close minuting of minute minute minutiae (I couldn’t resist) makes for an unusual approach for a Golden Age Mystery, though initially it also leads to a little bit of tedium when we have to plough through many, many pages of detailed notes on the comings and goings of the theatre company at the time of death, which no one seems to have witnessed. It’s the sort of detailed timetabling thing that Rex Stout got away with but which otherwise tends to send to me sleep (pace the tabulations and timetables of Freeman Willis Croft).

“It breathes down the back of your neck,” Mrs North whispered to him suddenly. “The emptiness.” 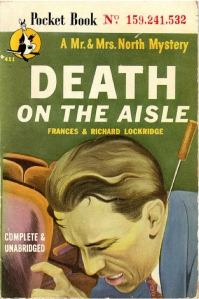 On the other hand the theatre atmosphere and the nervous bitchiness of the actors is nicely rendered and Pam gets to make a number of amusing references to Alexander Woolcott, Thorton Wilder’s classic ‘Our Town’ and even the comedy of SJ Perelman before taking Jerry and Dorian off, leaving Weigand to interrogate the dozen or so possible suspects. Pam and Jerry actually don’t appear much in the first third of the novel but things perk up considerably when Weigand and Mullins, his sometimes slow-witted Sergeant (who invariably refers to his boss as ‘Loot’), head over to the Norths for a conference and some Martinis. Before long the theatre’s super is found concussed and locked in a cupboard and a couple of hours later Pam finds the show’s leading lady drowned in her bath, momentarily knocks the devil-may-care sleuthing spirit from her:

Pam sat down very suddenly on the bed and watched and then put her head down to force back the circle of dark which seemed to be narrowing about her.

Pam soon gets herself into trouble, as so often is the case in the series, and is whisked away at gunpoint leading to the (equally obligatory) car chase climax found in many Lockridge books, before the villain is finally unmasked. This is actually handled very suspensefully as the Lockridges try to misdirect the reader into who it actually is that has kidnapped Pam, though the effect is slightly spoiled by what turns out to be a fairly pointless escape attempt which sees Mrs North wander back to the murderer’s home by mistake … This is a fairly quick and breezy read and at that level I certainly enjoyed this, my first Lockridge book in about 25 years. Pam’s scattiness in particular is pretty beguiling, especially towards the end when the murderer decides to kill her, thinking she has uncovered the truth because our amateur sleuth just comes out and says what’s on her mind while walking around the darkened theatre – within earshot of the guilty party! This is completely unwittingly and not a ploy to entrap the villain just her screwball personality trait asserting itself at the worst possible moment, on top of which it turns out that Pam had got it wrong anyway.

“I suppose it’s always a mistake to bump into a murderer.” – Mrs North

On the other hand … the plot, while perfectly functional, is fairly predictable stuff and disappointingly doesn’t make much of the ‘real time’ element – plus the murderer’s plan proves to be pretty thin with far too many chances of being caught to be plausible. Equally the prose style, despite some attractive and memorable turns of phrase, can also occasionally be a bit lumpen and pedantic, bringing a halting quality for a comedic whodunit in the classic style that above all else requires smoothness and lightness of touch to work. There is none of psychological complexity or cleverness that one would find in a Patrick Quentin novel like Puzzle for Players (which I previously reviewed here) for instance, with which it does however share a number of plot similarities. Slightly more damningly, it also suffers from some of the worst social and racial prejudices of the era with homosexuals depicted as comic pansies and one character constantly, and unnecessarily, having their name followed by the words ‘colored’ – to add insult to injury, this is the basic reason given to exclude such characters from serious consideration as suspects!

Still, I’ll probably try another of the ‘Mr and Mrs North’ novels in a while and see what I make of that – and there are certainly plenty to choose from. The complete list is as follows:

The series came to an end with the death of Frances Lockridge in 1963.

As the book came out before 1960, this review is also eligible under the guidelines of Bev’s 2011 Mystery Readers Challenge