Posted on 27 August 2011 by Cavershamragu

“Philo Vance / Needs a kick in the pance” – Ogden Nash

It is only with hindsight that we can properly discern the ebb and flow of patterns in crime fiction and separate the true trend setters, those destined to leave a lasting mark on a genre or movement, from mere fashionistas and copycats. When discussing the novels of S.S. Van Dine, it has become virtually de rigeur to quote Ogden Nash’s celebrated doggerel couplet, and I’m happy to oblige – because it is funny and because, by the time he wrote it, late in the series, it was probably a little bit true. Also, verse is very important to the plot of The Bishop Murder Case, without question one of Van Dine’s finest achievements. And once upon a time Vance was a fictional force to be reckoned with – does this, one of the best of his books, still stand up to scrutiny?

I humbly submit the following review under the guidelines of Bev’s 2011 Mystery Readers Challenge with a special word of thanks to that host as this book was a gift from the blogger herself. I hope to do it justice …

“Do you hope to run a murderer to earth by dillydallying over a chess game?”

This is a mystery which has a plot that feels quite modern and which, as is now the fashion, also has surprisingly high body count (nearly all the major non-series characters will have been murdered by the time it is over). It focuses on a murderer who kills his victims to follow a pattern based around a theme: in this case, nursery rhymes. First a man named Robin is found dead with an arrow in his chest (‘Who killed Cock Robin?/ ‘I’ said the sparrow / ‘With my bow and arrow); then another named Sprigg is found with a bullet through the head (‘He shot Johnny Sprig / Through the middle of his wig’), then another falls off a wall (Humpty Dumpty …) and so on. After each murder the criminal mastermind behind it all then taunts the press and the police with notes pointing out the connections with the rhymes, signing his letters as ‘The Bishop’. This all takes place within the confines of the large adjacent New York homes (see the map below) owned by three mathematicians, creating a truly bizarre pocket universe in which the story takes place over the course of a foggy April. 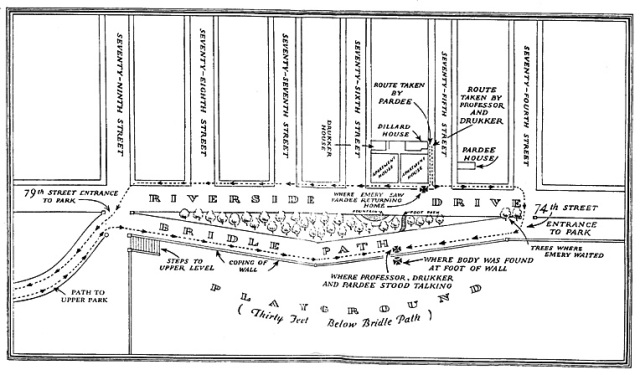 The inhabitants include Professor Dillard, a celebrated scientist, who lives with his adopted daughter Belle and his protegé Sigurd; then across the way there is Mrs Drucker and her son Adolph, a near-genius working on quantum theory; and finally there is Pardee, who is a chess wizard and who, like Robin, is in love with Belle. As the bodies start to pile up and the air of insanity becomes inescapable, the book begins to exert a quite magnetic pull as it draws togethern extraordinary range of ideas, all of which are steadfastly subordinated to the plot. Included in the heady mix, along with the aforementioned nursery rhymes, archery and chess are quantum mechanics, the plays of Henrik Ibsen, Freudian psychoanalysis as well as intimations of incest in not one but two parent-child relationships. 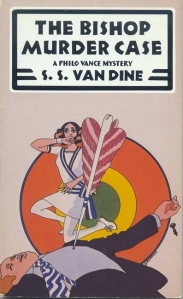 I previously profiled the author and his detective in one of my earliest blog entries, ‘The SS Van Dine Murder Case’, which you can read here. Although it would seem that the books are seldom read today in great numbers, they are discussed a lot on the blogosphere by fans of Golden Age detective stories with a mixture of affection and disdain. While Vance can easily be characterised as an American cousin to Dorothy L. Sayer’s Lord Peter Wimsey, the books are less controversial than their British counterparts, less prone to elicit the same kind of praise and condemnation; but also less in the way of sheer passionate debate as is still the case with her series. Instead the perception for many seems to be that Van Dine’s contribution was historically important but artistically much less enduring. This can be attributed to a number of factors already clearly in evidence in The Bishop Murder Case, which many, along with The Greene Murder Case, consider to be the cream of Van Dine’s output. The author (who, behind the pseudonym, was the art critic and Nietzsche scholar Willard Huntington Wright) believed that mysteries should focus purely on the creation and eventual solving of ingenious crimes and shouldn’t be saddled with the romantic subplots, social commentary or complex characterisation to be found in more ‘serious’ literary works. For many this can make the books seem arid and stuffy and, worse, make the protagonist too remote and unapproachable to maintain reader interest (which is more or less what Chandler was intimating in his famous essay).

“In Ibsen is the key to the mystery.” 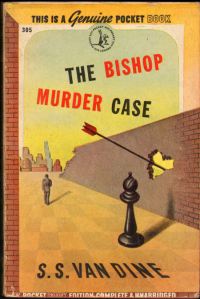 And yet … The early Philo Vance stories were one of the great success stories of the 1920s and were a true publishing phenomenon – it is claimed that the books were largely responsible for keeping publishers Scribners solvent during the Depression. Wright had originally planned three novels in great detail and submitted these detailed synopses to his publisher before being given the go ahead. Bishop therefore, as the fourth in the series, was planned and written in the full flush of that initial success. The book is presented in a simple, unadorned but lucid prose style that is remarkably uncluttered, ensuring that all our attention is devoted to the case at hand as described by Van Dine, who appears in the book as the narrator, Boswell to Vance’s Johnson as it were.

This was itself an original addition to the genre on Wright’s part (taken up by ‘Ellery Queen’ shortly thereafter), a variation on the idea of Watson and Holmes – and there is something more than a little Sherlockian about Vance’s apparent disinterest in women, his genius knowledge of remarkably obscure bits of information and his focus on puzzles for their own sake rather for an overriding sense of justice. But this is all handled with considerable intelligence, as the novel is in fact, for its plot to work, very much predicated on a critique of those who would apply logic without a sound understanding of human motivation.

Leila Hyams and Basil Rathbone in the 1930 MGM film version of The Bishop Murder Case.

This is made clearer by having a contest within the novel (a bit like the duel between Poirot and a local detective Giraud in Christie’s 1923 novel, Murder on the Links) to solve the crimes between the more psychologically inclined Vance and the ultra-logical scientific methods employed by Sigurdur. Equally, the novel makes it clear that the lives of those who have no emotional outlets (meaning the scientists here, but clearly applicable to monomaniacal detectives like Vance and Holmes) are weakened, damaged and potentially destroyed by this fact. And in the case of Bishop, the plot as it is eventually revealed in its conclusion does in fact revolve around sexual jealousy, to a degree going against Van Dine’s edict against the use of romance in detective fiction. Wright/Van Dine was not as sensitive as Sayers and less interested in developing the private inner life of the protagonist – but on the other hand, his construction of plot is really quite superb and can still surprise as a whodunit in a way that Sayers often doesn’t 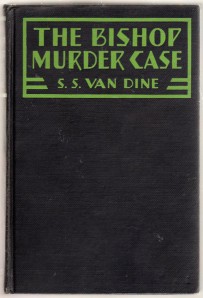 In addition, while there are those that would attack Van Dine for his inclusion of tons of seemingly extraneous material, both in Vance’s voluminous exegesis and the book’s seemingly endless use of footnotes, they tend to miss some important facts – in the early books the apparent extra-curricular infodumps are tied in superbly to the plots, so that when in this story Vance starts discussing the time travel possibilities envisaged by Einstein, this isn’t just filler but a fascinating look at the mind of the murderer; and as for the footnotes, on several occasions ‘Van Dine’ does in fact correct Vance, showing an ironic sensibility between the seemingly flat exterior. And this book also picks up some considerable dramatic momentum as it reaches its conclusion, with the hunt for a young kidnapped girl handled superbly well as we finally penetrate Vance’s seemingly imperturbable exterior to reveal the passion within.

I hadn’t read this book in a couple of decades, and then only in an Italian translation that omitted all the footnotes – thanks to Bev I have had the opportunity to re-acquaint myself with one of the great Golden Age classics of the 1920s. I heartily and unreservedly recommend this book. But let me leave the word to the great Julian Symons, who is often accused of being overly critical of this kind of story, but who in Bloody Murder had this to say of this book (and its predecessor, The Greene Murder Case), in particular:

“Yet admiration should not be withheld from these two books at least. In their outrageous cleverness, their disdainful disregard of everything except the detective and the puzzle, they are among the finest fruits of the Golden Age.”