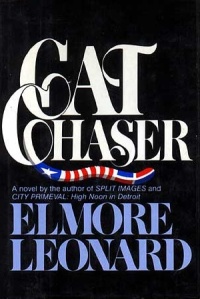 Today Patti Abbott is celebrating the work of Elmore Leonard over at her fab Pattinase blog. I am chipping in with this review of his Miami-based thriller from 1982. George Moran is an ex-marine, once married into society but now divorced, who now runs a hotel. His combat past comes back to bite him in the derrière when he goes back to Santo Domingo and falls for the right woman – who unfortunately is already married to the wrong guy.

As the book was filmed in 1989, and co-written by Leonard no less, I also offer the following as part of the 2013 Book to Movie Challenge at the Doing Dewey blog. Click here to read all the participant’s reviews.

“It doesn’t bother you,” Nolen Tyner said, “you call this place the Coconut Palms there isn’t a single palm tree out there? Isn’t that false advertising?”

After building up a solid reputation as an author of Westerns in the 1950s and 60s –  including the novel Hombre and such short stories as 3:10 to Yuma and ‘The Captives’ (aka The Tall T), all of which were later turned into exceptional films – in the 1970s Leonard re-established himself as a crime writer. He initially set his stories in Detroit but increasingly moved down south to Miami, which from the 80s onwards became the main setting for his work. First Gold Coast (to be reviewed here soon-ish) and then Cat Chaser marked his relocation to Florida, both featuring similar stories of men who fall in love with women married to powerful gangsters with plots pivoting on their marriage prenup. But then most of Leonard’s plots from this point onwards are often variations on a basic situation where the Darwinian imperative is flexed as various characters try to get their hands on a stash of valuables. With Leonard it’s never really the plot that you come for, though he would deny any special authorial technique anyway – as he once set down in his Ten Rules of Writing:

“My most important rule is one that sums up the 10: If it sounds like writing, I rewrite it.”

As with Chandler and Simenon, the distinctive Leonard tang is derived from his deadpan humour and an often under-appreciated skill in conveying time and place with great economy. This is particularly true of Cat Chaser, which not only has hints of the Floridian drug wars to come but incorporates anxiety over the influx of Cuban and Haitian refugees while also providing glimpses of Santo Domingo during the US occupation in the 60s. Moran was once married to a prosperous woman and worked for her father in real estate – back in those days he already knew he didn’t really fit in and had fleetingly met fellow Detroit native Mary, the American wife of General De Boya, who fled the Dominican Republic twenty years before.

“I don’t know what I want as far as a career goes; but the best thing is to be rich and not worry about it”

Moran got divorced, grew a beard, got kicked out of the golf club  and started a new business as a hotelier running the Coconut Palms. It is here that his past starts to catch up with him, first in the unlikely shape of drunken ex-actor Nolen Tyner who inveigles himself into Moran’s affections after the two realise they both fought in Santo Domingo at the same time. Nolan it turns out is actually there to keep an eye on Anita, De Boya’s sister, who is having regular trysts at the Palms with a piano player. This is eventually brought to an end when Jiggs, one of De Boya’s men, comes to take her home again though in a nice twist it turns out that she engineered this as a way of getting rid of a lover she had grown tired of. With memories of his past coming to the surface so regularly, Moran decides to head back to where it all started, when he was in the ‘Cat Chaser’ platoon and the target for a local sniper named Luci Palma. he even puts an ad in the local paper:

CAT CHASER is looking for the girl who once ran over rooftops and tried to kill him. Call the Hotel Ambassador

Moran is looking for his past in the Dominican Republic and to his surprise finds the unhappily married Mary – and the two fall in love, finally acting on impulses that they had been suppressing for years. At the same time he becomes the target of Rafi, a con man who tries to pass himself off as the revolutionary Moran took a shot at in the war before being taken prisoner. He says he can find the real Luci, but she is really just a symbol of Moran’s youth. Back in Miami, Mary and George continue their affair, which becomes the object of interest for various parties, mostly manipulated by Jiggs through Nolan, who are after the millions of dollars that de Boya is said to keep hidden in his mansion. Then Rafi turns up with a girl who says she is Luci’s sister…

“He keep his money under the mattress now?”

Mary has decided to leave her chilly husband, having finally realised what everyone else already seemed to know – that he is a brutal sadist who used to be the head of the secret police and was responsible for the deaths of countless people. How could she have not known? This strains credulity, as does her delays in departing to find the ‘right time’ to tell him, which ramps up the suspense as Jiggs tries to use Moran to find out where the money is actually hidden. All this delay allows de Boya enough time to discover that his wife is cheating on him and plan a horrible revenge. As various plots and double-crosses are enacted, George and Mary try to get out alive and not become pawns in a grubby chase for cash. This is all very exciting and well-staged and leads to an exciting finish that feels a bit like a Western in which two armed men face off to see who is quickest on the draw. It’s the right end to a zesty and sexy thriller that has a surprisingly sweet love story at its core.

“I’m on cutting-room floors at all the major studios. So I’m going in a different field”

In 1989 Abel Ferrara directed an adaptation of the book co-written by Leonard. It didn’t make much of a dent at the box office and had various problems with censors to tone down the sex and violence. In addition the director’s initial cut, running 157 minutes, was rejected entirely by the producers who panicked and brutally slashed the running time to only 90 minutes. They then also added a redundant voice-over (spoken, uncredited, by Reni Santoni), which really doesn’t help much in making the by now rather messy story more coherent; unfortunately this was the version seen by most people on video, though the initial VHS edition was a longer, slightly racier cut that sadly has never appeared on DVD. It remains, while clearly somewhat inconsistent, a remarkably faithful take on the book, keeping much of the dialogue and plot though expanding on the erotic element. What the film does offer is a particularly good cast with Peter Weller ideal as the dead-pan Moran still haunted by his past as a soldier (courtesy of some grainy black and white footage). Kelly McGillis is great as the sexy and fiery Mary, here pretty much drawing to a close her very brief career as a Hollywood star after the back-to-back success of Witness, Top Gun and The Accused. Her initial entrance, all dolled up and lit to look like the 80s idea of a classic film noir femme fatale (i.e. very big hair) is a bit cheesy maybe, but she’s a tough dame in the book and remains a decent character on-screen too. Frederic Forrest as the disheveled and permanently soused Nolen and Thomas Milian as de Boya are admittedly somewhat typecast but are also typically excellent in the roles none the less. It is Charles Durning however who pretty much walks away with the movie as nastier and more craven-than-expected enforcer, Jiggs. If you want to see some great actors in what feels like three-quarters of a better than average thriller, then you may well find it worth a look. It is certainly a lot more fun (and occasionally frustrating) however if you know the book beforehand.

DVD Availability: All home video editions have been 4:3 ratio which is very disappointing – the German DVD is said to be longer than most but none are very satisfactory from what I have been able to glean  – it would be nice to think that Ferrara would be able to release his own edition at some point.

For further information about the author and his work, visit the official website at: www.elmoreleonard.com