Posted on 15 August 2011 by Cavershamragu

“My name is Westlake, not Watson.”

‘Jonathan Stagge’ was the last of the three pseudonyms used by the writing partnership of Richard Wilson Webb and Hugh Wheeler between 1936 and 1952 and is much less well-known than their other collaboration published as by ‘Patrick Quentin’ and ‘Q. Patrick’. Replete with their trademark emphasis on recognisable and psychologically well-rounded characters and above-average whodunit puzzles, they are however much heavier on atmosphere than some of the other Webb and Wheeler collaborations and are much closer to the works of John Dickson Carr. This is particularly well in evidence in Turn of the Table (which was also published as Funeral for Five) which features seances and the hunt for a moonlight killer that may be a vampire.

As the book came out before 1960, this review is also eligible under the guidelines of Bev’s 2011 Mystery Readers Challenge

Most of the Stagge cases originally appeared with different titles depending on whether they were published in the US or the UK – here is a complete list, with the first publication title followed by its subsequent variant one:

The protagonist of this series is small town doctor Hugh Cavendish Westlake (a name presumably patterned after that of co-author Hugh Callingham Wheeler). He is based in Kenmore and considers himself to be anything but an amateur sleuth – he just happens to get involved in murder cases, which he usually helps to solve through his friendship (he delivered all five of his children) with Inspector Cobb, the chief of Police in the nearby Grovestown, where Westlake made a home until the death of his wife. The widower lives with his young daughter Dawn, who was 10 years old in the series debut novel (Dogs Do Bark) and is twelve in this book, which was first published in 1940.

Westlake is spending the Summer in Grovestown as a locum for the holidaying Doctor Hammond and has taken on his upper crust patients, none more prominent than the family of wealthy banker Bruce Banner, who happens to live next door. Banner, who suffers badly from angina, has recently re-married following a long and difficult marriage to Grace, a manic-depressive who committed suicide two years ago while on a cruise in Canada. Bruce is now happily married to Sheila, who is in her early forties and with whom he is expecting a child. Between them they already have three children from their previous marriages, all of whom are currently staying with them: Linette and Oliver from Sheila’s, and Greg, from Bruce’s. Theirs is an apparently idyllic and happy life, until the arrival from Vancouver of Eleanor Frame, a relative of Banner’s first wife. Along with being a constant reminder of Banner’s unhappy first marriage, she is also a spiritualist and Banner quickly seems to come under her spell, much to the disgust of the rest of the family who resent her growing influence and the messages from Grace that she is apparently bringing back from the ‘other side’.

Sheila and Linette both come to visit Westlake to invite him to dinner, concerned that Eleanor is aggravating Bruce’s condition and hoping that he might be able to hep get ride of her. That evening the entire family is there in addition to Sarah Deane, Bruce’s mother and a once famous actress, Sheila’s brother Trimble Comstock, who is also the family’s lawyer, and David Handley, an executive in Bruce’s company who is courting Linette, a gifted singer. That evening Westlake immediately sees how toxic the atmosphere has become under Eleanor’s malign influence as she insists that they hold a séance despite Bruce’s increasing ill-health. With their hands touching round a heavy table and with all the lights switched off, a message promptly arrives from ‘Grace’ presaging Bruce’s death – and almost at that exact moment he apparently has an attack. Westlake gives him the
nitroglycerine capsules that Bruce always carried with him but his condition worsens – despite further attempts to save him he dies. Westlake calls in his friend Cobb, suspecting that the capsules he administered had been interfered with. When he looks for the original tube of tablets, which rolled under a table in the confusion, he is unable to find them but they are later mysteriously found in Bruce’s pocket. 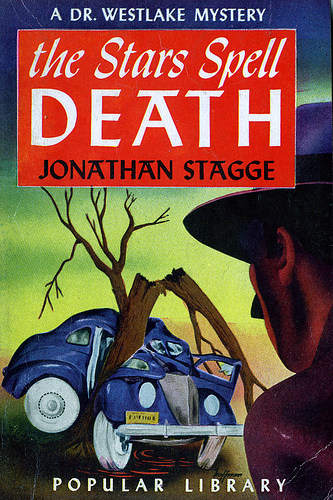 One of the notable aspects of the novel, typical of Wheeler and Webb’s books, is the extent to which the main character becomes personally involved in the case – here Westlake is deeply concerned that he will be blamed if it does turn out that he was the one who gave the wrong pills to Bruce, which Cobb exploits to use the Doctor as his ‘inside man’ within the tight-knit Banner clan. When the pills are examined Westlke is told that they are normal, but Eleanor arrives at the surgery the next day claiming that she has the tube that contained the actual pills that Bruce was given. When these are checked by Cobb, it is determined that these in fact contained poison from the lab where Greg is currently studying, pills that the previous Autumn Oliver had stolen and attempted to commit suicide with. Eleanor tries to blackmail Westlake into taking her on as a nurse now that the Bannisters are kicking her out and she wants to remain nearby. Westlake is so infuriated that he slaps her, but Dawn suddenly returns from her camping holiday after hearing about the murder and takes a shine to the reptilian woman. The sense that Westlake is being pushed and also sucked into investigating the case is very well rendered, making him much more human than the average sleuth. Cobb gets Westlake to keep Eleanor on as his nurse and turns him into a spy and unwilling detective as he has the confidence of the family. There will be several deaths to follow (including the family dog, polished off seemingly by Eleanor to check if Bruce’s pills were poisoned or not) in quick successions before everything is cleared up.

There are some fairly contrived and melodramatic elements to the second half of the novel which can make it seemed a bit rushed as Westlake constantly goes to a from the Banner residence and back to his own again – in fact this part of the story takes place in just a few hours. But there is also a fine spooky atmosphere as there is another séance that succeeds beyond even Eleanor’s hopes and really does seem to raise Grace’s spectre from the dead, while Westlake himself is attached by the ‘vampire’ before a body is found in the swimming pool. Two-thirds of the way through there is a major twist that changes the entire plot, leading to a long and convoluted explanation of the case but, in the style of Ellery Queen, this proves only to be a false solution to be replaced by a simpler, darker and more satisfying explanation.

This is a novel that isn’t particularly easy to find but it’s a great introduction to the Stagge series that deserves to be better known.